Son of a gun 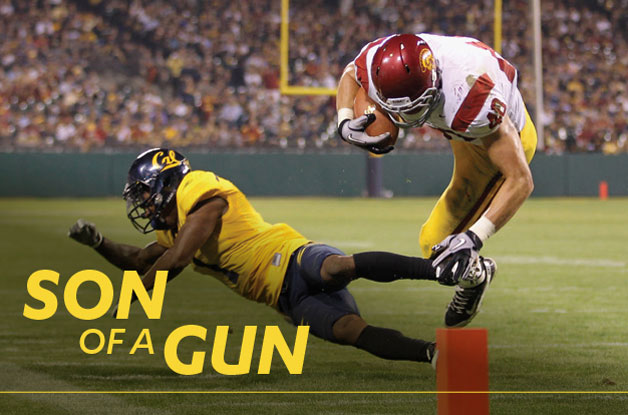 Ellison. In international sporting circles, the name is synonymous with the success of NFL legend Riki Ellison. Now his son Rhett is answering the call to make his mark on this American game. Kaituhituhi Aaron Lawton reports.

The unmistakable sound of a cell phone ringing cut through the silence on the water, shaking the part-time fisherman from his daydream.

On the other end of the line, an official from the Minnesota Vikings had some news – he was, in less than five minutes, about to be drafted.

Tears began to flow as he made a beeline for the family home where he knew his dad would be nervously waiting, glued to the television coverage of the 2012 NFL draft.

The fish would live to bite another day. He, 24-year-old Rhett Ellison – son of three-time Super Bowl winner Riki Ellison – was moving to Minnesota.

Initially, the younger Ellison had to pinch himself to make sure he wasn’t dreaming; that he hadn’t fallen asleep on that lazy spring afternoon.

Several months earlier, he’d taken part in the NFL’s Scouting Combine in Indianapolis where, alongside a host of other wannabe NFL players, he threw his body into a battery of tests while the scouts, coaches and general managers watched on, jotting every key statistic down on their clipboards.

Thankfully though, he was in the process of finishing a master’s degree at the University of Southern California (USC), and a respectable nine-to-five career beckoned.

After four years starring for the Trojans – one of college football’s top teams – as a tight end or fullback, he thought his playing days were behind him.

The Vikings had other ideas.

“It was definitely a surprise to get drafted. Even at the NFL Combine, I was there as a running back and I’ve been a tight end my whole career at USC,” Ellison says now, three months later, from his new apartment in Minnesota.

“I wasn’t as athletic as the rest of the guys and my performance at the Combine wasn’t great. And if you look at my numbers at USC, they weren’t great either.

“I wasn’t expecting to get drafted so when it happened the feeling was just unbelievable.”

What’s more unbelievable as the start of the new NFL season draws ever nearer is the fact that the 128th pick in this year’s draft is not actually the all-American boy he may first appear to be.

With a closely-cropped crew cut and 114 kilos of muscle on his nearly two metre tall frame, Ellison wouldn’t look out of place in an Abercrombie & Fitch catalogue.

But when he suits up for the Vikings in the coming months, he will become just the third Kiwi after his father and David Dixon, a former Minnesota Vikings guard from Papakura, to make it in one of the toughest sporting competitions on the planet.

To most New Zealand sports fans, the name Riki Ellison needs little in the way of introduction.

Born in Christchurch and with Ngāi Tahu blood coursing through his veins, Riki starred as a hard-hitting linebacker for the San Francisco 49ers during the 1980s before heading south to Los Angeles in 1990 where he closed out his career, playing three seasons for the Raiders.

Clearly, the acorn hasn’t fallen far from the tree and while Rhett was born in Portola Valley, California and speaks with the expected American twang, he’ll be waving the Kiwi flag every step of the way as he enters into the uncharted and cut-throat waters of the NFL. 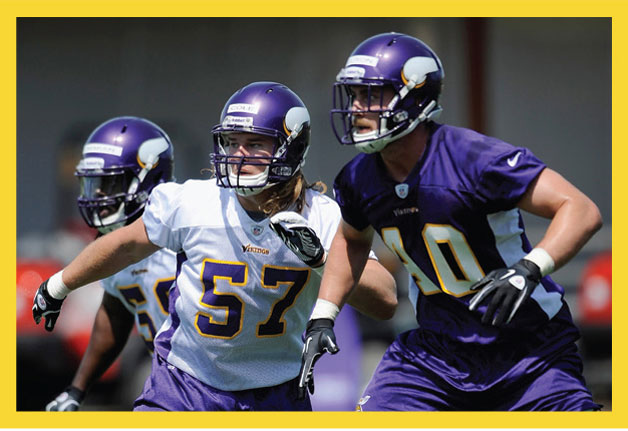 Rhett Ellison on the right at a Minnesota Vikings Minicamp.

He has spent just two years in New Zealand where, as a five-year-old, he attended St Andrew’s College in Christchurch. But like his dad, this Māori warrior knows where he’s from.

“I definitely consider myself at least part Kiwi,” Ellison says. “I’ve still got a lot of family down there in New Zealand and the only reason I haven’t been able to get out there is because of football.

“I think this off-season might be my chance to get there for the first time in a while.

“I know a bit about my Māori heritage. I know my great uncle Tom Ellison was an All Black.

“I remember when I was about six years old and we had a big family reunion at a marae and I learned how to do the haka and all that sort of stuff.”

Growing up in sunny California – a world away from Christchurch – Ellison understandably had no designs on following in the footsteps of Tom Ellison or, for that matter, his well-known cousin Tamati, and becoming an All Black.

From day one he knew what he wanted to do. That was to follow in dad Riki’s footsteps and play for USC’s mighty Trojans where legends like O.J. Simpson, Reggie Bush and Junior Seau had found fame.

“Once you start playing football, you watch the pros play and you know that’s what you want to do,” Ellison says.

“But I think for me it didn’t really become a reality until after I had left USC.

“I mean, my whole life I wanted to play at USC and I never really looked ahead to the NFL.

“That was always the first dream and then once I’d finished my career at USC, to take it to the next step has been amazing.”

Ask anyone around the traps at USC and they’ll tell you that Ellison’s career as a Trojan was a roaring success.
After he captained the side in his senior year, the college named a leadership award after him.

Not bad going, you’d agree, for a bloke who the USC scouts initially had no interest in.

“I was the last guy that USC wanted on their scholarship programme. I was kind of the second guy,” Ellison says.

“What really happened was the tight end they wanted went to Notre Dame and I was the second-best option for them.

“Even at USC, I kind of had to climb my way through. Articles were written about me and how they didn’t expect me to do anything or even expect me to play.

“It was, I think, my work ethic that got me through all of that. My success has mostly been about my work ethic and also having my dad with me the whole way along to coach me and give me tips.”

Just for the record, the tight end who opted for Notre Dame has as yet failed to make it in the NFL.

But that in itself begs the question – how did a college footballer initially unwanted by USC end up in the NFL on a four-year deal worth $US2.4 million?

One day, while watching the tight end train the house down, it came to Polamalu in a flash – the young man out on the field was like a machine. He was – “Da Machine”. From there, the name stuck and soon everybody was using it.

It wasn’t that he was stiff, mechanical or robotic. Far from it, in fact.

He was, if anything, more like the Energizer Bunny.

When opposition players were trying to bring him down, he kept going and going and going. And when the block needed to be made to protect star quarterback Matt Barkley, there was Ellison, refusing to give an inch.

“I didn’t know at first whether the nickname was a good thing or a bad thing,” Ellison says.

“If you’re thinking about a machine you are thinking of something that’s stiff and mechanical.

“But he meant it in the best of ways and you know, you can never pick your own nickname and you just have to go with it.

“There’s definitely a lot of nicknames that would be worse than mine.” 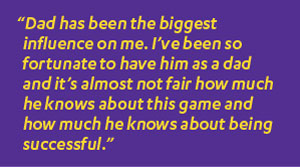 If anything has prepared Ellison for the NFL, it’s been playing football for USC.

It might be hard to fathom in this part of the world where we struggle to fill out Eden Park for a Blues match, but big games played by the Trojans, a college team, regularly draw upwards of 90,000 fans to their home base – the Los Angeles Memorial Coliseum.

“Think about it – the Trojans are pretty much the NFL team for Los Angeles,” Ellison says.

“They play in the largest media capital in the world and we were definitely the centre of attention during football season.

“But I think the experience has probably helped me as I prepare to play in the NFL where you’ve always got eyes on you.

“We might have actually had more eyes on us at USC than we do right now here at Minnesota.

“But I guess playing for the Trojans has trained me for this. Playing in the Coliseum on the biggest stage, you get used to playing in big pressure games and in front of big crowds.

“In the NFL, every game has big pressure and is in front of big crowds so that’s the biggest difference.”

Ellison is the first to admit he’s climbed a personal Everest of sorts to get this far. He also knows he wouldn’t have got there without his dad, Riki, driving him and guiding him every step of the way.

If, as USC’s head coach Lane Kiffin says, the Da Machine is “competitive in all aspects of his life and is a true Trojan”, it’s because he learned by example.

“It’s not just football too.

“He’s taught me about everything in life, about how to set goals and how to achieve those goals.

“He likes to call them work plans and we set those up every year – whether it’s for life or for sports.

“It’s just this thing he has with me and all of us and his influence on me has been unbelievable.

But following in the footsteps of the giant linebacker can’t be easy.

At USC where Riki played in the early ‘80s, stories of his on-field heroics followed his son everywhere.

And in the NFL it will be no different. There will, Rhett knows, be comparisons, expectations and huge hype to deal with when he finally pulls on that Vikings jersey.

“I think there was probably more pressure in being Riki Ellison’s son at USC than there is in the NFL,” he says.

“He was a pretty big legend there.

“What has been helpful is that I play pretty much the opposite position to where he played so you can’t really compare us in the same way. “Yes, there’s definitely pressure but it’s just extra pressure on top of all the other pressure and I’m just trying not to think about it too much.”

The bigger pressure, Ellison offers, is about simply surviving in arguably the toughest league in American sports.

Yes, he just got paid $US300,000 as a bonus for signing on with the Vikings and, yes, he has more money in his bank account now than he’s ever seen, but if Da Machine stops functioning like a well-oiled one, his career could be over before it begins.

How’s that for pressure?

“With the NFL, the pressure is on you every single day. You have to work hard to try and make the team and they can cut you whenever they want,” Ellison adds.

“If you look at the NBA or Major League Baseball, if you sign a contract you are there for that long and there’s nothing that the clubs can do about it.

“But in the NFL, if you sign a four-year contract, they can still terminate it at any point.”

Of course, if it counts for anything, as he goes about stamping his mark on the NFL, Ellison knows that somewhere in the south Pacific, a nation of four million will be willing him on.

“The support I’ve had from New Zealand has been unbelievable. I didn’t think Kiwis would be that interested in me, especially because I play football and not rugby,” he adds.

“It’s been a surprise but it’s also been awesome.”

Here’s hoping we can soon say the same thing about Ellison’s career in the NFL.