Stories were waiting to be told 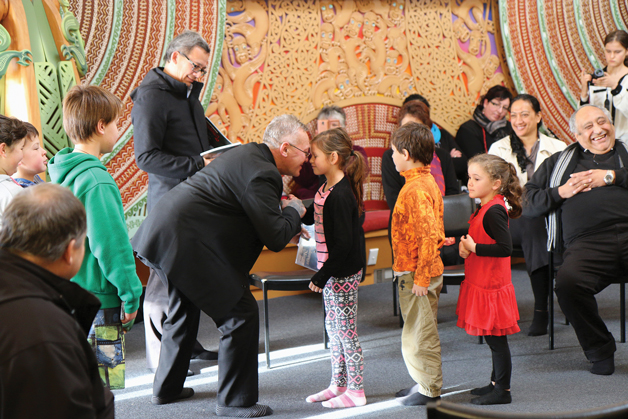 A rousing haka pōwhiri from Bluff Community School pupils assembled on the marae ātea at Te Rau Aroha Marae greets the Ministry of Education officials as they walk up the hill.

This is a big day for Bubba Thompson (Waitaha, Kāti Mamoe, Kāi Tahu, Ngāti Kahungunu ki Wairoa) from Te Rau Aroha Marae. Today he will present four story books to the school children. The books tell stories which are also told in the whakairo at the marae. Stories of Ngāi Tahu tūpuna unique to this area.

Bubba, who has been involved in creating all four, is active in the school. In turn, the school children are frequent visitors to the marae, and after the formal stuff in the wharenui, they race around outside like they own the place. 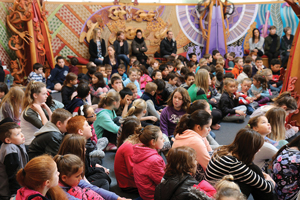 School children in the wharenui.

“A few years ago, Alison (Alison Cook, Bluff Community School principal) and the kids came over,” Bubba says. “I said to Alison, ‘Most of these kids are ours. They should learn the stories about our place,’ and it developed from that. I said, ‘I would really like all your teachers to come over and I can show them around the marae, but I would encourage them to bring the children over here and tell them themselves, rather than me being called on all the time.’”

Bubba reckons he was always taught to start at the beginning and so he did, introducing the school’s students to the creation myth.

“I wanted to introduce the kids to those basic ones, so they knew who the weather was about – who was the man responsible for the weather? Of course that was Tāwhirimātea.

“Who is the kaitiaki of Moana-nui-a-Kiwa? Ko Tangaroa. I wanted them to learn those basic ones first, because to me that’s the beginning.

“I’m not a teacher, but I could see that was a way to get them involved. Then the ministry came, and I took them over to the school. It was awesome. They had all this stuff around the place and they had started to develop a Māori understanding of the world.”

Seeing the school children get the books and start reading was magic, he says. Charisma Rangipunga and Paulette Tamati-Elliffe (general manager Te Taumatua at Te Rūnanga o Ngāi Tahu and programme leader Kotahi Mano Kāika respectively) had been a great help. “They have produced books for Ngāi Tahu before and their expertise was invaluable.”

Now he could skip out the back and leave the children to it. 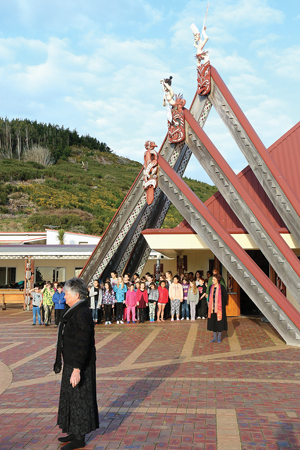 “I am happy and it’s nice to see they are appreciated, and hopefully it is building a bridge to those other schools that come here. My interest is in feeding them Te Ao Māori. That’s what I’m about.”

The resources were developed as part of Te Mahere Mātauranga, a six-year partnership between papatipu rūnanga and the Ministry of Education aimed at strengthening rūnanga relationships with schools.

The resources included Ngāi Tahu stories, waiata collections, and tikanga and marae protocols, among others. The second, three-year part of the contract, Te Mahere Mātauranga Part II, ended in December 2014.

Its success is evident as the books are handed out at Te Rau Aroha Marae and the children split into groups to listen to the stories.

Alison Cook says her school is lucky to have such a close relationship with Bubba Thompson and Te Rau Aroha Marae.

“We are really fortunate. It’s not a formal relationship. It’s quite casual, and the kids see the marae as part of school life. They don’t think twice about coming here. They just own it and roar around as though they were at school in the playground. It’s really nice that the kids see this as an extension of everyday life and school life.

“The people here are really open to having conversations. Bubba is just amazing. It’s great to be able to ring him and say we would like to do something but we don’t know where to start, and he will come down to a morning tea or a teacher’s meeting. We plan stuff sitting on his living room floor, or rock on up here (to the marae) and have a cup of tea in the kitchen. 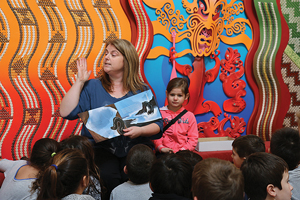 “We had done a lot of work with Bubba because we wanted our kids to have an understanding of things Māori, but we didn’t want it to be tokenistic. You want them to understand and feel and know it.”

Tuahiwi and Arowhenua both had education teams, he says, while others employed co-ordinators. Some of the rūnanga developed education strategies in consultation with the schools and early childhood centres. Bluff had an advantage in that there was just one school to deal with.

“It’s a way for them to record their stories, making them accessible to tamariki and wider communities, and the benefits of that are far-reaching,” says Henare.