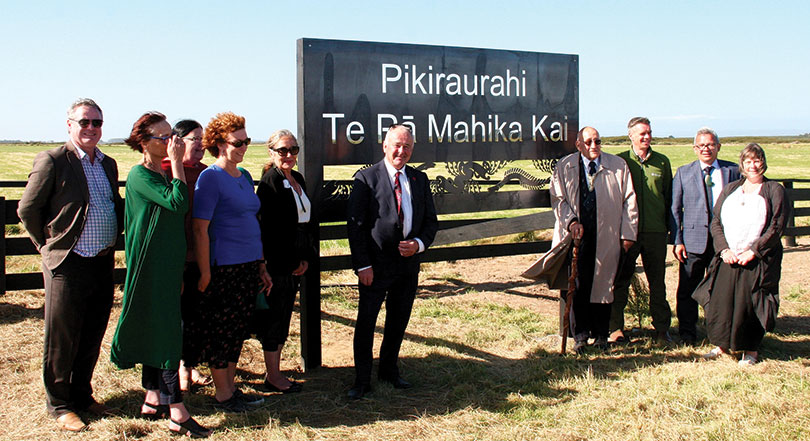 Members of the Awarua rūnaka, Whakamana te Waituna Trust and partners gather at the entrance to Te Pā Mahika Kai, which was officially opened by Tā Tipene O’Regan (fourth from the right) on Waitangi Day. PHOTOGRAPH: ROB TIPA

Awarua rūnaka has turned the clock back on land lost to the Crown with the strategic purchase of a pivotal 404-hectare sheep and beef farm in the heart of the internationally-recognised Awarua/Waituna wetlands, widely regarded as one of the last remaining expanses of relatively unmodified wetlands left in Aotearoa.

The Awarua Rūnaka, through its Te Wai Parera Trust, has been in negotiations for several years with the Waghorn family, which for two generations drained, developed and successfully farmed the land. The sale was secured in time for the 2021 Waitangi Day celebrations at Te Rau Aroha Marae in February.

The new purchase was christened Pikiraurahi, Te Pā Mahika Kai in recognition of the work by Awarua upoko Tā Tipene O’Regan to secure the Ngāi Tahu Settlement Claim during the 1990s, and his ongoing work for the rūnaka. 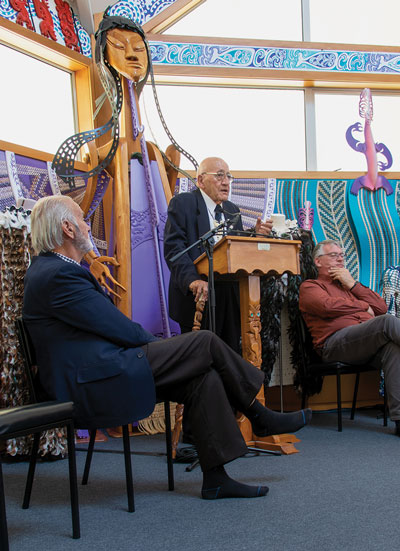 Unveiling the new sign at the entrance to Te Hāpua Waituna, Tā Tipene explained the significance of the name. Pikiraurahi (also referred to as Piki) was the first-born child of Whakatitiro and Pipiriki of Takapuneke in Akaroa. She was married to Tutupahi, rakatira of Western Murihiku, while her sister Te Wairua was married to Te Marama, the rakatira of Eastern Murihiku. Their younger brother was Tamaiharanui, Upoko Ariki of Ngāi Tahu. John Boultbee’s journal of the 1820s described Piki as “…. a stout woman of amiable disposition”. Tā Tipene is a descendant of Tei Tei, the second daughter of the union between Tutupahi and Pikiraurahi, “which is why I’m in a position to tell you this story.”

His first memories of Waituna Lagoon were fishing there as a small child.

“I remember the lagoon as it was then, and it has certainly deteriorated over time with changing patterns of land use, but its present management is functionally useless as a mahika kai site because there is no regular tidal flow.”

Tā Tipene says the return of land at Waituna into Ngāi Tahu ownership was an opportunity for the iwi to get ahead of the curve on climate change, and for the Awarua rūnaka to return to the front foot its tūpuna once held in the region before the whenua was lost to Crown ownership.

By the time children at the 2021 Waitangi Day celebrations are middle-aged, Waituna would be fully tidal again, he predicted.

“It will be a bay and, as I keep reminding the relevant authorities, Bluff will be an even deeper, deep-water port.

“The point that I want to make is that we have an opportunity here to recognise the future and identify the way the overall environment is going to shift and change, and to get ahead of the curve.

“I see this exercise today bringing to fruition a marvelous set of events and relationships, and I feel hugely appreciative of all the forces that have combined to bring us to this stage.
“I look forward to the next flowering as the replanting and next change of land use takes place.”

The Awarua/Waituna wetlands are an internationally-recognised network of lagoons, estuaries, swamps, peat bogs, scrub and remnant patches of native bush covering 132 square kilometres of low-lying coastline between Bluff and Fortrose.

As part of the Ngāi Tahu Claims Settlement Act in 1998, the iwi negotiated with the Crown to secure statutory acknowledgement of its traditional rights over the wetlands.

One of the last remaining expanses of relatively unmodified wetlands left in New Zealand, it was highly valued by Ngāi Tahu whānui for the wide variety and reliability of mahika kai it provided for travellers and permanent settlements scattered around its fringes.

The lagoon, its waterways and feeder streams are an important spawning ground for several indigenous fish species.

As a result of a long history of occupation in this region, southern Māori retain knowledge of traditional walking trails and tauranga waka (landing sites) as well as wāhi tāpu and wāhi taonga sites along its extensive shoreline.

In recent years intensive farming around the fringes of the Waituna catchment has caused a steady decline in water quality, triggering a warning from Environment Southland in February 2011 the lagoon was dangerously close to “flipping from relatively good health into a turbid and toxic algal soup”.

The Awarua Rūnanka stepped in, placing a rāhui banning further development of dairy farms in the catchment until the lagoon met guidelines on nutrient loadings, phosphates and nitrate levels set by authorities.

It’s part of who I am and where I come from. This place was used extensively by our Ngāi Tahu tūpuna and many of the wider whānau.
It was a thoroughfare for our whānau on the southern coast; there are traces of old trails through the wetlands and landing places for waka.

“Awarua Rūnaka will drive this development with help from other funders and agencies. I’m guessing there will be a lot of people wanting to help out as much as they can. We’d like to see a community project with everyone on board.”

For Steph Blair, the newly appointed manager of Pikiraurahi, Te Pā Mahika Kai, securing the property was strategically important for the Awarua rūnaka, with support from the three other Murihiku Papatipu Rūnaka (Waihōpai, Hokonui and Ōraka-Aparima) and Ngāi Tahu whānui.

“We’re all on board with Awarua taking the lead,” she said.

Since Environment Southland’s warning the lagoon was on the verge of “flipping”, there had been a huge multi-agency effort to improve it, she says.

With several dairy farms bordering the lagoon’s fringes, the Waghorn property was pivotal because it backs on to a Department of Conservation reserve and flanks the Waituna Creek, one of the main waterways feeding the wetlands.

Farming is not part of future plans for the land. Instead, the rūnaka intends to develop a network of ponds. They will then replant them with natives and restore the mahika kai resources the wetlands were historically renowned for.

Aerial maps of the property show traces of traditional waterways, which the rūnaka is keen to reinstate by reflooding developed land – allowing the lagoon to return to its natural state.
“Long-term, the aim is for Ngāi Tahu whānui to be able to harvest traditional mahika kai foods like tuna and waikōura. We are hoping whānau will have beehives situated on the whenua that will provide honey,” Steph says. “I am passionate about tuna and in the future I would like to tame them for the whānau and visitors. Boardwalks could be situated throughout the ponds as an attraction for visitors, as well as having the ability to harvest kai.”

Harvesting mahika kai has been a lifelong passion for Steph. 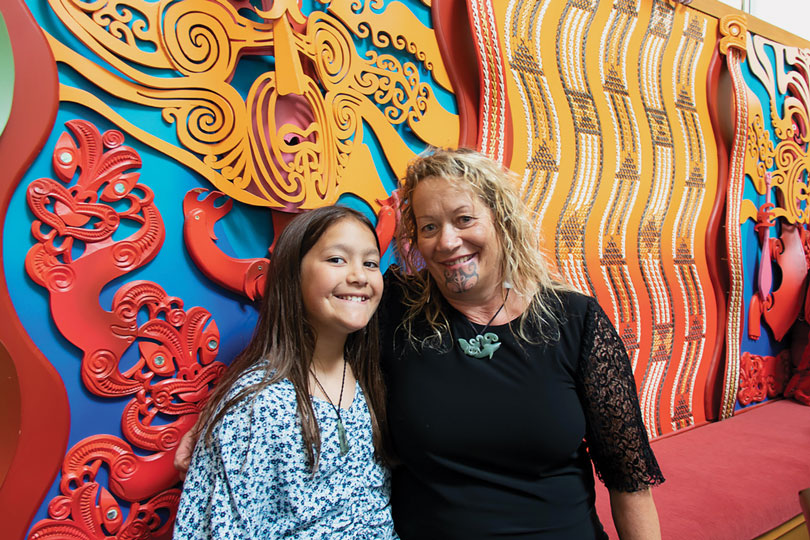 Steph Blair with her mokopuna, Ataahua.

Her whānau has a long association with the wetlands, which stretch from Toitoi Harbour at Fortrose to Tīwai Point and Bluff.

“I can only speak for my own whānau and how they utilised this area. It’s one of our special places. I come from The Catlins and Waituna was the place where my grandfather came to fish for tuna, kana kana, whitebait, pātiki, elephant fish and shark, which can be caught from the shore.

“It’s part of who I am and where I come from. This place was used extensively by our Ngāi Tahu tūpuna and many of the wider whānau. It was a thoroughfare for our whānau on the southern coast; there are traces of old trails through the wetlands and landing places for waka.”

Steph says Southlanders have a strong commitment to environmental restoration and a genuine appreciation of the wetland. Te Pā Mahika Kai has an important educational component for schools in Murihiku and outside.

“I have a teaching background, so it’s going to be a really different role for me, but I’m excited and really keen to get moving with our aspirations.”

Steph and her whānau have been running Rangatahi Tumeke, an outdoor programme that has passed on traditional mahika kai skills to Ngāi Tahu rangatahi for the past nine years. “This kaupapa and property fits in with all of that,” she says.

The property comes complete with two woolsheds and a house that will be used as a residence for the on-site manager. The rūnaka is considering refurbishing a large woolshed into an education centre and will develop offices and facilities for staff and visitors.

“Awarua Rūnaka will drive this development with help from other funders and agencies,” Steph says. “I’m guessing there will be a lot of people wanting to help out as much as they can. We’d like to see a community project with everyone on board.”

With such a strong emphasis on the management of New Zealand’s waterways and national efforts to restore water quality in delicate catchments like Te Hāpua Waituna, Te Rūnanga o Ngāi Tahu will be watching closely what its southernmost rūnaka can achieve in this internationally important and ecologically sensitive catchment.