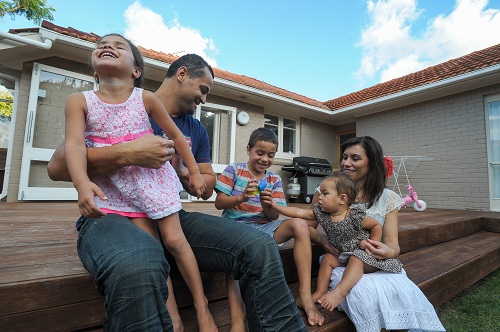 Radio host, TV presenter, mother, Whai Rawa member.  When Classic Hits breakfast presenter Stacey Morrison meets other Ngāi Tahu she checks if they belong to Whai Rawa, the Ngāi Tahu matched savings scheme, and goes into campaign mode if they don’t. “It is your right if you are Ngāi Tahu to be part of Whai Rawa,” says Morrison.

“People often ask me what we get on a day-to-day basis from the settlement,” she says. “Whai Rawa is a great example of it.” In a society where, as Stacey says, it’s “hard to get extra money for anything”, Whai Rawa is a tangible way to benefit, with matched annual savings up to $200.

“I also knew about Whai Rawa because I am involved in Ngāi Tahu events whenever possible. I studied with help from a Ngāi Tahu reo fund, and will be passing on these learnings within the iwi through the Aoraki Matatū scheme.”

Morrison jokes that husband Scotty was so impressed with Whai Rawa that he searched long and hard for Ngāi Tahu whakapapa so that he could join, but failed.

When the couple’s youngest daughter Maiana (15 months) was born, Morrison ensured she was signed up to Whai Rawa before the 12-month cut off to get her $60 baby bonus. “It’s a really busy time with a newborn, but I made sure she got the newborn bonus.” Likewise Maiana’s two older siblings Hawaiki, 7, and Kurawaka, 5, joined early.

The long-term plan is that all three children will have a lump sum of money for tertiary education. Along with whānau having sufficient funds at retirement, Whai Rawa is also designed to improve Ngāi Tahu participation in tertiary education, and improve home ownership levels. Like many parents, Morrison is amazed at how quickly the tamariki are growing up.

Whai Rawa is one of the ways that Morrison keeps in touch with Ngāi Tahu. Being part of the Ngāi Tahu diaspora means that she has less face-to-face contact with whānui and the iwi in general.  “It’s so expensive with three children to go to Christchurch.”

Morrison adds: “I have tried to be involved in Ngāi Tahu mahi when I can, even though I don’t live in the South Island.”  She also follows Ngāi Tahu on Twitter to stay in touch. “Whai Rawa is secondary to whakapapa and whānau, but it is another way to stay connected.”

Before Morrison reaches kaumātua age, she will be able to start withdrawing her savings and deposits made over the years by Ngāi Tahu. Two withdrawals a year are allowed from the age of 55.

The Morrison family’s involvement in Whai Rawa is more than a financial investment.  It’s a cultural investment and an investment in the education of the tamariki.  The children’s accounts are helping the development of financial literacy in the whānau. “They don’t get much (financial teaching) at school, and Whai Rawa is beneficial for their financial education,” Morrison says.

“(Thanks to Whai Rawa) the kids are becoming financially savvy.  I wish I had this opportunity when I was younger.”

It also helps foster discussions around the dinner table over kai.  “It helps me point out to the kids that although they live outside Ngāi Tahu that it’s a really important part of their whakapapa and they should be grateful for the benefits they will get.” Their poua, Monty Daniels, “was part of the board that worked tirelessly putting their hearts and also finances in to the claim and settlement.

“At seven, they say, ‘Oh yeah, whatever, mama.’” But Morrison is confident that the message is sinking in.

Another benefit of Whai Rawa is that the whānau savings are in a lower risk investment.  I understand higher risk can mean higher return but I’m comfortable with a lower level of risk for now,” she says. All Whai Rawa funds are currently invested in the Mercer Defensive Fund,  and all costs and expenses other than the investment manager fees are currently met by Te Rūnanga o Ngāi Tahu.