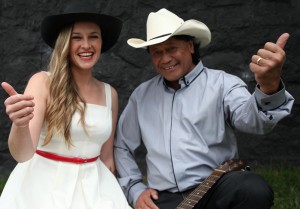 Saelyn Guyton (Kāi Tahu) co-hosts Māori Television’s latest music show, My Country Song, alongside country music legend Dennis Marsh. Saelyn was the 2010 New Zealand Gold Guitar winner and the Southland Entertainer of the Year in 2011. Originally from Invercargill, she recently moved to Waihi Beach where she is working on original material for an upcoming album release.

What constitutes a good day?
A good day for me is getting into the bush, finding a sweet spot for a swim, eating good kai and having some laughs with a nana nap somewhere in between. Writing a song definitely makes for a good day too! I’m currently working on original material, developing my sound and hoping to release an album in the new year.

One thing you could not live without?
Laughter. I think connections with whānau and friends are vital for Māori, and humour helps to make those links solid. And of course you’ve got to be able to laugh at yourself — we’re pretty good at that too.

Who or what inspires you and why?
Kids. They’re so straight up. It’s refreshing working with children as a singing teacher, because they say it how they see it. They definitely help put life into perspective!

Highlight in the last year and why?
Co-hosting My Country Song. Through the show I got to explore Te Ika a Māui and managed to land an ika of my own, he’s Ngāpuhi, but he was born in Murihiku — so he’s a pretty sweet catch. The show also encouraged me to further my use of te reo. I had the privilege of hearing some original waiata from our rangatahi.

What is your greatest extravagance?
My iPhone. I’m queen of losing and breaking them. It’s an extravagance bordering on addiction — I’m onto my third one and I still haven’t paid off the first. It’s a bit sad really.

Favourite way to chill out?
A few laps on the Paeroa BMX track is a good way to zone out.

Favourite place?
The Catlins. It’s the perfect mix of bush and sea. I spent a week camping there last summer. It’s one of the many treasures of the South Island but it was the first time I actually camped in the area. It’s so close to my hometown but I’d never made the time to check it out and I’m stoked I did. It was one of the best weeks of my life.

Dance or wallflower?
Dance. I have moments of wall flowering but the boogie always manages to burst through.

What food could you not live without?
I’m on the healthy mish so I couldn’t live without fresh fruit and veges. So much colour, flavour and goodness in the natural kai, but I’ll always love my bread and butter.

What meal do you cook the most?
Porridge. With some Greek yoghurt and brown sugar. I cook it every morning, even when I don’t feel like it — it’s the best way to start the day.

Greatest achievement?
Helping students at a special needs school express themselves through music. It is a humbling experience that increases my appreciation for the power of music. To have non-verbal students jamming out in our school band, so carefree and present — well there’s nothing quite like it.

Do you have an aspiration for Ngāi Tahu to achieve by 2025?
Peter Burger summed it up well in the last edition of TE KARAKA when he said, “As much inclusion as possible”. While there is a strong Ngāi Tahu network, we need to find ways of supporting all of our people. I feel that it is the birthright of every Māori to know that they belong and feel connected to their iwi. Over the next decade I would like to see Ngāi Tahu reach out to the disaffected and culturally disadvantaged. “Waiho i te toipoto, kaua i te toiroa.”