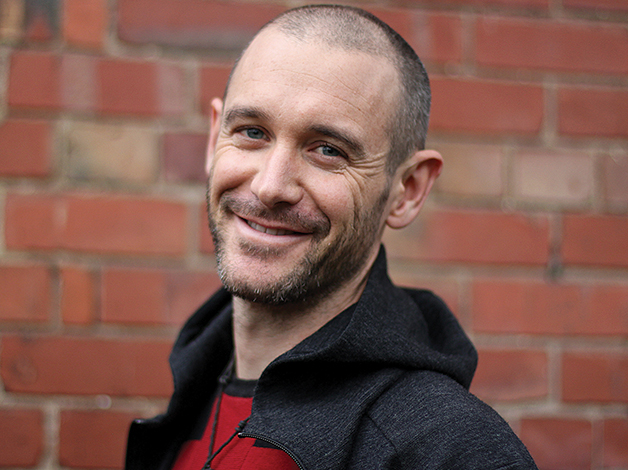 Nic Low is a writer, installation artists and arts organiser. His parents are Hikatea Bull and Geoff Low. Born in Christchurch, these days he divides his time between a hyper-social Melbourne sharehouse and an anti-social bush retreat. His first book is Arms Race, a collection of fierce, playful short stories touching on mining, drone warfare, climate change, and tino rangatiratanga. His second, a literary, historical, and bicultural expedition through Kā Tiritiri-o-te-Moana, comes out in 2016.

He writes about place, race, culture, politics, and earthquakes. He won the 2011 GREW Prize for non-fiction, a shortlisting in the 2012 Commonwealth Short Story Prize, and runner-up in last year’s Overland Short Story Prize. When not writing, he exhibits art at festivals around Australia, and until recently ran the International Writing Program at the University of Melbourne’s Asialink Institute.

What constitutes a good day?
A good day is one where the words are flowing. I’ll start around seven (am), go for a run or a mountain bike ride in the bush, have breakfast, scull a whole lot of coffee, then sit down to write. I try to get 1000 words done each day, and it’s a kind of race. The sooner I finish the sooner I’m free. Some days it’s like pulling teeth and I’m still there at midnight. Other days I’m done by lunchtime and the day’s mine to catch up with friends, brew beer, or work on the house. Those days are the best.

One thing you could not live without?
Good conversation!

Who or what inspires you and why?
Keri Hulme is a big inspiration for me.

I love The Bone People and Te Kaihau, and the way she weaves together history, myth, and place, and how inventive she is with language. By winning the Booker Prize she also encourages us to aim high – we know readers all over the world are interested in our stories.

Highlight in the last year and why?
Finishing my first book, Arms Race. I’ve been working on it for a few years now and at times it was tough going, so it’s a real highlight being able to finally share it with whānau and friends, seeing it in bookshops, and getting messages from readers.

What is your greatest extravagance?
Tramping gear. Full-time writers aren’t exactly loaded, but… let’s just say that I have at least four sleeping bags.

Favourite way to chill out? Favourite place?
There’s something about our mountains that really speaks to me, so my favourite way to chill is to load a pack and head off into Kā Tiritiri-o-te-Moana with my brother Tim and friends. We go exploring for eight or ten days at a time, sometimes on tracks, sometimes just following our noses. We ramble during the day, then at night cook gourmet tramping slop, drink whiskey, and solve the world’s problems.

Dance or wallflower?
Dance! I love bass music and when I’m in the city I’m often out on the floor. I’m also obsessed with the idea that we should take what we’re doing more seriously – really write like there’s something at stake – and take ourselves, as writers, a whole lot less seriously, which is why the launch of Arms Race, at the closing party of the Melbourne Writers Festival, was also the Third Annual Pan-Melbourne Interpretive Dance Championships.

What food could you not live without?
Muesli and fresh fruit. Sad, but true.

What meal do you cook the most?
Does making muesli count as cooking?

Greatest achievement?
Creating The Bookwallah, a roving writers’ festival that took a bunch of writers and a travelling library 2000 km across India by train. We travelled third class, lugged round a quarter of a tonne of books, did something like thirty public events, and talked about culture, race, and history till we were hoarse. It was insane, but somehow a lot of fun.

Do you have an aspiration for Ngāi Tahu to achieve by 2025?
By 2025 I’d love to see a whole generation of young Ngāi Tahu writers collaborating, critiquing, and supporting each other to publish books in te reo Māori and English, so that our stories are one of the engines of culture in Aotearoa and beyond.