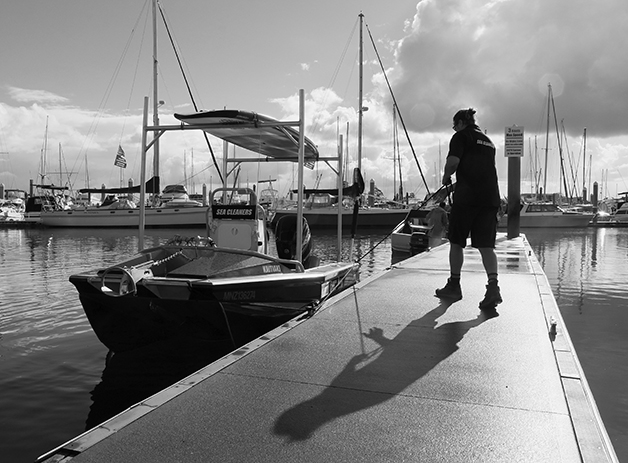 Motoring up the shipping channel of the Whangārei Harbour, Hayden Smith suddenly slows the Sea Cleaners boat and arcs it hard right. He’s spotted something in the water. It’s a piece of plastic, which he expertly manoeuvres towards before grabbing a net to scoop it from the ocean.

He’s done this a thousand times before – it’s what feeds him, drives him, and helps to give his life purpose.

“There’s not a human being on the planet that will ever see a day without plastic in the ocean,” he says.

Paddling up the Waitemata Harbour while working as a kayak guide, Hayden (Kāti Huirapa ki Puketeraki) couldn’t help but be affected by the volumes of rubbish floating around him.

“From the bridge everything looks ok, but it’s a different story once you get on the water.”

That was over 14 years ago. Now, after setting up the charitable trust Sea Cleaners, Hayden has been responsible for removing over 4.8 million litres of plastic rubbish – more than 40 million individual pieces – from waterways around the Auckland region, and as far afield as the Bay of Plenty, Taranaki, and Northland. This plastic poses a deadly threat to sea life, including endangered New Zealand turtles, which often die slowly and painfully from ingested plastic blocking their intestines.

90 per cent of the plastic and trash collected has come off the land and he and his small team have mobilised more than 100,000 hours of volunteer time from individuals, schools, groups, businesses, neighbourhoods, communities and even the New Zealand and
American Navies.

Hayden is in the process of building their 4th boat in Whangarei and the first to be based out of Auckland. Each boat costs about $350,000 a year to operate and he has plans to have 10 operating full time around the country by 2020.

“We want to embed this model and eventually multiply it overseas – 10 countries with 10 boats, but we need to make sure we get it right at home before we think about international work. It’s for our children and our children’s children – that’s what this project is about.”