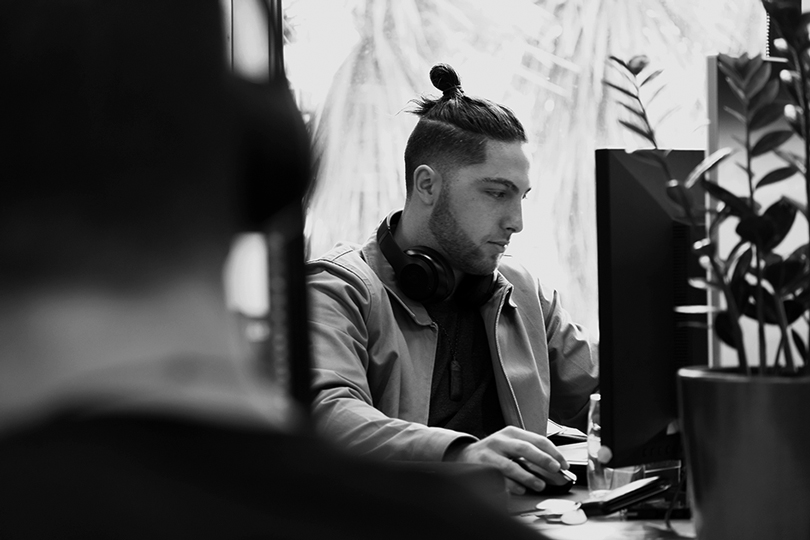 When Max’s girlfriend Carley “busted out” her pepeha, it was the perfect motivation the young videographer needed to start learning his language.

“It really inspired me that Carley, who isn’t Māori, could stand up and introduce herself in te reo and tell everyone her whakapapa,” says Max Tiweka, who is Ngāi Tahu on his mother’s side and Ngā Rauru on his father’s side.

A year-and-a-half ago, Max started work as an intern at Ariki Creative, an Ōtautahi-based Māori creative studio specialising in digital and print media. It’s that career change Max credits as the beginning of his journey to learn about his Ngāi Tahutanga.

“[Ariki Creative Founder] Hori (Mataki) has been a big influence – we definitely have a tuakana-teina relationship – and he has created a real whānau atmosphere here at Ariki, which has helped me.”

Max received a Matakahi Scholarship from Te Rūnanga o Ngāi Tahu in 2014. This supported him to study part-time for a Diploma in Civil Engineering, while working at engineering consultancy Aurecon as a geotechnical technician for three years.

He was pretty handy with a computer and had always maintained an interest in film-making, often putting his hand up to film cousins’ weddings. The engineering work, it turned out, wasn’t very fufilling and he started looking at other career options.

“I happened to be in the right place at the right time when Iwi Capability at Ngāi Tahu told me about an internship at Ariki Creative,” says Max.

The rest, as they say, is history. Today, Max is busy producing, shooting, and editing videos; which takes him from the far north to Bluff and brings him into contact with all walks of life. The majority of his work is kaupapa Māori, which has helped give him further insight and experiences of his people and his culture.

“Starting to know my whakapapa and understand where I’m from is a powerful thing. It has meant that I feel more invested in the work I am doing. It’s been a massive learning curve for me, but I have been so lucky to have Hori next to me to learn from.

“I don’t want to sound clichéd, but it really has been life-changing coming to work here, with the opportunities it has given me to learn and grow in my career and my culture.”

Click a photo to enlarge it and view the photo gallery.