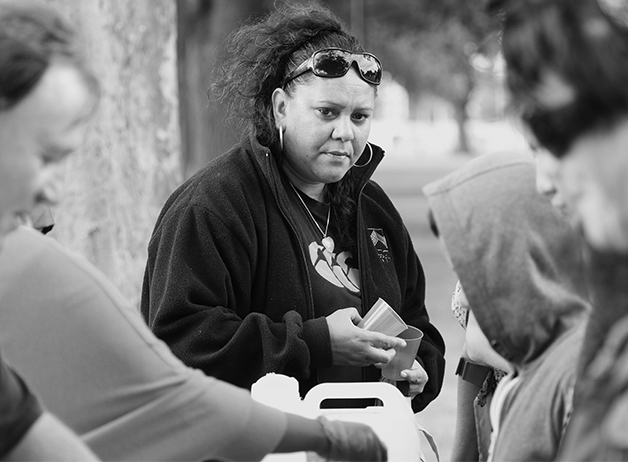 Amy Burke is a self-confessed “doer”.
What she has done in close to two years is change the lives of hundreds of homeless people in Ōtautahi, because in her words, “it needed doing”.

In May 2014, working as a cleaner in the Re:START container mall, Amy noticed the homeless people in and around the city. She reached out and offered help to a few individuals, and soon discovered a huge need by people doing it tough on the streets, laid off from jobs, living in over-crowded houses, or just struggling to make ends meet.

It was winter, and she gave away her gloves one night to a young teenage boy. She started giving away clothing belonging to her whānau, partner Spencer Mouranga, and her four children aged between 8 and 18. Next she started cooking food to give away – toasties – paying for it out of her own pocket.

Amy started a Facebook page called Help for the Homeless, and very soon the help started to flow in; clothing, food, bedding and blankets, household items – “People just want to help,” she says.

She eventually quit her job and today, backed by a huge network of volunteers, Amy and helpers provide a free nutritious lunch every Tuesday and a dinner every Sunday evening for anyone who makes their way to Latimer Square in the central city. Many will leave with food parcels, or in winter, warm clothing, particularly coats and jackets, offered to those that need them.

Amy was adopted as a baby and grew up in Ōtautahi as part of a Ngāi Tahu family, through her adopted father Larry Burke. “I don’t know my birth parents, but Dad always talked about being Ngāi Tahu, and encouraged me to find out about my whakapapa.”

When she’s not running her household, much of her time is now taken up advocating for those who need help dealing with agencies over a myriad of social, employment, housing, and health issues.

“If we can get them back in to the community they are more likely to succeed. The end goal for me is to not have to do this anymore.”