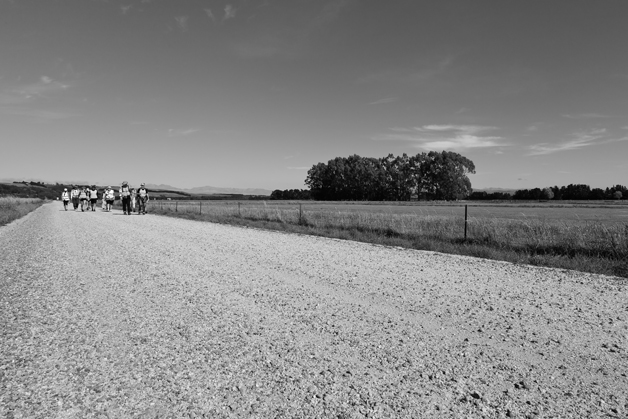 The route to and from the inland plains, where tī kōuka and weka were harvested, is an old one, and the Te Maiharoa family have been travelling it for a long time. In 2012 the whānau retraced the trail of their ancestors from the coast to present-day Ōmārama, and in 2016, it was time to walk the return journey, tracing the Waitaki River back to coastal Korotuaheka.

Auntie Sissy Te Maiharoa has been a long-time advocate for the river and its health. “We want to follow in the footsteps of our tīpuna,” she says. “And to do something for the river, to celebrate its mauri.”

Close to 50 people gathered to join the five-day hīkoi of history, whānau, and connection to place; from the core of the Te Maiharoa family and friends to wider Waitaha, Kāti Māmoe and Ngāi Tahu whānau, and supporters from as far afield as Auckland and Bluff.

The group swelled in number for the final day’s walk along gravel roads towards the coast and its final destination of Korotuaheka – the place where Te Maiharoa and his people finished their heke and settled anew. What remains today is a terrace covered in pine trees, and the ancient urupā where the prophet was buried. The cemetery is a small island of flourishing tī kōuka and harakeke in a sea of farmland.

In 1877 the prophet Hipa Te Maiharoa led a heke from Arowhenua into the high country. After decades of land loss and unease at settler society’s influence on tikanga, Te Maiharoa looked to the mountains. This was the “hole in the middle”, the land not included in Kemp’s Deed. When parliamentary petitions and legal challenges failed, Te Maiharoa, senior chief Rawiri Te Maire, and more than 100 followers decided to reoccupy the land themselves. Like Te Kooti before and Gandhi after, the aim was non-violent direct action.

In the winter of 1877 they crossed the Waitaki, then travelled west in search of their promised land. Moving slowly over frozen ground, stopping to rest or gather aruhe, they travelled under old tapu, and drew new inspiration from the biblical story of the Israelites. They were headed for Hāwea and Wānaka, but settled at Te Ao Mārama in the upper Waitaki along the way.

Te Maiharoa and his followers spent two years in the small village they’d founded: cultivating and harvesting kai, teaching and learning tikanga in the whare rūnunga, and rekindling ahi kā across the high country. Wealthy, influential sheep barons and their shepherds were hostile, hamstringing the settlement’s dogs, and claiming Māori were laughing at the government. Following intense political pressure, the government assembled the armed constabulary and delivered an ultimatum. According to the government, they were squatting on private land. The armed constabulary and an artillery unit were mobilised to “put them off”.

When the troopers arrived Te Maiharoa was in the sun beside his hut, and a karanga rang out. Jimmy Rickus reassured them it was a welcome, not a signal to attack. Two of Te Maiharoa’s followers who did draw weapons were disarmed by their kin. Participants later recalled hearing strange voices in the air. Buddy Mikaere’s book Te Maiharoa and the Promised Land recalls the moment:

“I do not want action which sheds blood,” called Te Maiharoa, and the decision was made. They would go in peace (pp 115–6).

Te Maiharoa’s group left slowly, setting off into falling snow in 30 drays and wagons, with 100 horses, and 100 dogs alongside. Ahead at Korotuaheka lay bare ground. This was where Te Maiharoa’s people finished their heke and settled anew. All that remains today is a terrace covered in pine trees, and the ancient urupā where the prophet was buried.