In May this year, Christchurch was left buzzing after community members turned out en masse to attend a series of free te reo Māori lessons offered by the Wigram-based seafood restaurant, FUSH. Kaituhi Morgan Lee caught up with Anton Matthews (FUSH co-owner) to find out more about his passion for all Te Ao Māori. 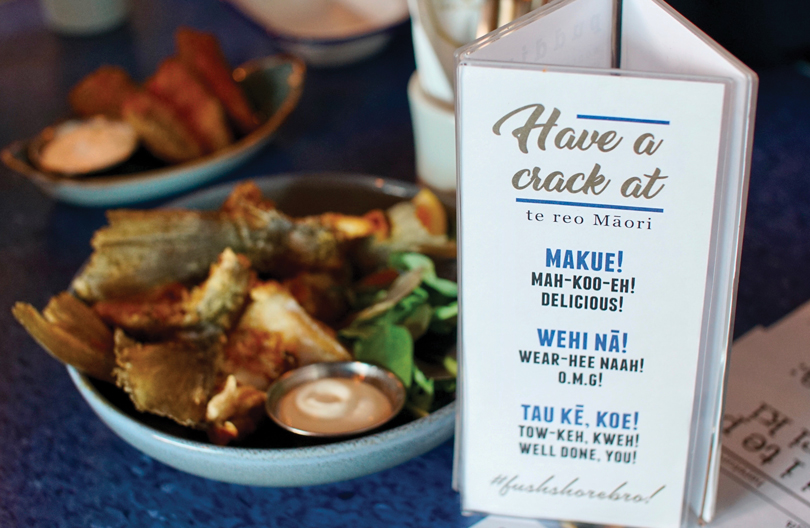 Anton Matthews (Te Rarawa, Te Aupōuri) is doing his bit to revitalise and normalise te reo in Ōtautahi, one customer at a time. “I’m a firm believer, and I’m not the first person to say this, but I think to understand Te Ao Māori, or even a little bit of our world, you must have at least a little bit of te reo Māori knowledge,” he says.

Anton, along with his sister, Māia Matthews and his wife, Jess Matthews, are the proud owners of FUSH, which is one of the few Māori restaurants in New Zealand to have a bilingual menu. Every item is listed in English and te reo.

“As a youngster, my parents sent me to kōhanga reo and kura kaupapa because they wanted to give me something that they didn’t have,” Anton reflects. “They did their best to speak te reo Māori to me, but most of my reo came from my time at Te Whānau Tahi [Christchurch’s full-immersion Māori language school, formally known as Te Kura Kaupapa Māori o Te Whānau Tahi].

“Looking back on it, my parents were very courageous for making the decision to send me there, because a lot of their friends and whānau were against it at the time,” says Anton.

Nowadays, te reo, tikanga, and manaakitanga are at the heart of everything that Anton and his whānau do, and it’s evident that this passion is woven into their businesses. However, he admits that as a teenager, te reo wasn’t always his main focus.

“There were moments in my life, especially through high school, when girls, rugby, sports, and gyming took over and I became disinterested in te reo; and I didn’t think it was as important as I do now,” says the 29-year-old. 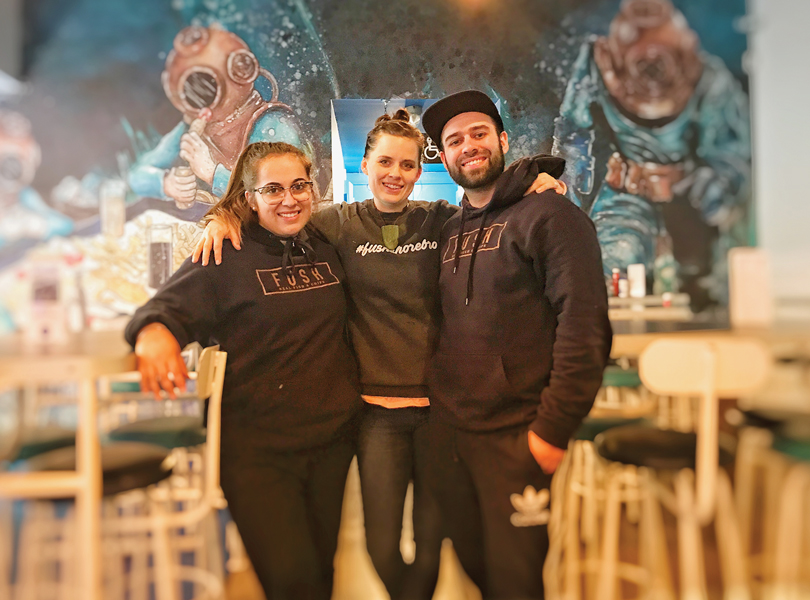 In 2012, Anton rekindled his love for te reo Māori when he attended the renowned Institute of Excellence in te Reo Māori – Te Panekiretanga o te Reo Māori, which is run by Te Wānanga o Aotearoa and founded by Tā Timoti Samuel Karetu.

“It wasn’t until I attended Te Panekiretanga that I realised how unique and special our language is,” Anton says. “Te Panekiretanga definitely helped to spark my life’s journey and re-ignite that fire to speak and learn te reo Māori, and from then on I jumped back on the kaupapa.”

An entrepreneur and pāpā to two tamariki, Te Ariā Aroha (5) and Mana Ariki (3), Anton is working hard to ensure that his children grow up in an environment where Te Ao Māori is celebrated and nurtured.

“I can put my hand on my heart and say that I have never ever spoken a single word of English to my children – apart from calling my daughter ‘darling’ and my son ‘bro’ or other little pet names. But apart from that, every communication that I’ve ever had with them has been in te reo Māori.”

Anton, who is a former classroom teacher, noticed that his daughter, Te Ariā Aroha, was reverting to speaking English when in public. Although he wished it were otherwise, he knew in his heart that despite his best efforts, his young children had already realised that speaking te reo Māori was not the norm for most New Zealanders.

However, around the same time, Anton and Jess noticed that a number of customers were commenting appreciatively on their bilingual menu, but expressing that they felt whakamā (shy or embarrassed) to use terms that they were unfamiliar with. They often sought guidance from staff around how to pronounce and use kupu Māori correctly, which led the couple to realise that the interest was there.

“I wish I had taken a picture of what I saw as I stood on the stage during that first night, so that I could show my daughter in years to come when she is old enough to understand that back then in 2018 it was not considered normal to speak Māori. But hopefully in 10 years’ time it will be different, and speaking te reo will be considered the norm.”
Anton Matthews, FUSH Te Rarawa, Te Aupōuri

In a bid to help normalise the first language of their tamariki, Anton and Jess decided to run a beginners’ te reo Māori lesson at FUSH – free of charge. The lessons were scheduled for Monday nights throughout May.

“We intentionally chose to have the classes on a Monday night because we know that Mondays are typically quiet – for my wife and I, Monday is our date night. By kicking it off at 8pm we thought it would give people and parents like us an opportunity to put the kids to bed and get a babysitter over,” says Anton.

The first lesson was marketed on Facebook and they were shocked by the response – within hours around 3,000 people had indicated they were interested in attending. A lesson which they assumed would be small and low-key soon turned into what Anton calls “a bit of a taniwha.”

The couple had no option but to look for a bigger venue to accommodate the crowds, and the auditorium at Anton’s alma mater, Christchurch Boys’ High School, seemed like the perfect fit.

When Anton jumped on stage for the first lesson, his suspicion was confirmed – the tide had definitely turned. He was gobsmacked by the amount of people who had come prepared and ready to learn te reo – notebooks and all. 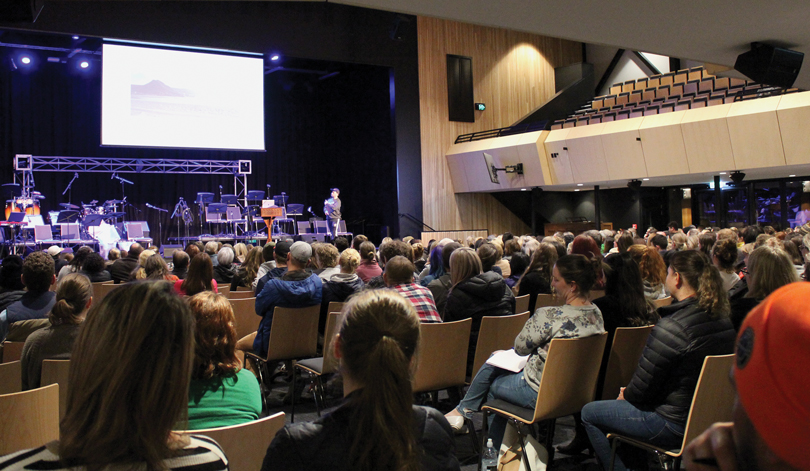 Above: A full house of Christchurch community-goers keen to learn te reo Māori.

“For once, I’m proud and happy to say that I got it wrong. I wish I had taken a picture of what I saw as I stood on the stage during that first night, so that I could show my daughter in years to come when she is old enough to understand that back then in 2018 it was not considered normal to speak Māori. But hopefully in 10 years’ time it will be different, and speaking te reo will be considered the norm,” Anton says.

Tahu FM presenter Jason Phillips (Ngāi Tahu – Ngāti Irakehu, Ngāti Makō) recalls the day that Anton approached him on the street in the hope of reaching out to the community through radio. Keen to support the kaupapa, Jason interviewed Anton on his radio show weekly ahead of each lesson.

“I believe the classes were so successful and appealing because Anton’s passion for te reo really shone through. He has a natural style of teaching and tries his best to share the language with as many people as he can,” says Jason.

Four one-hour lessons were held over consecutive weeks, attracting a staggering 600 plus people each week.

The popularity of Anton’s lessons was unsurprising to Kotahi Mano Kāika (KMK) Manager Paulette Tamati-Elliffe (Ngāi Tahu – Ngāi Te Ruahikihiki (Ōtākou), Kāi Te Pahi, Te Ātiawa, Ngāti Mutunga). According to Paulette, the appetite for te reo Māori is growing rapidly, with some of the programmes offered by KMK oversubscribed by 200 per cent. Tribal members across Te Waipounamu, rangatahi and tamariki in particular, are taking up the wero to commit to the tribal Māori language revitalisation strategy – Kotahi Mano Kāika, Kotahi Mano Wawata.

“The aspiration is for every Kāi Tahu whānau to use te reo Māori as the intergenerational living language between whānau members,” says Paulette. “We want every Kāi Tahu child to have the ability to articulate their thoughts, emotions, feelings, and knowledge in our ancestral Kāi Tahu reo.

“We know that this will require a concerted effort from our language champions, at least over the next two generations, but we have already seen that it is achievable.”

Where to from here? Due to popular demand, Anton has confirmed that he and his whānau are planning to visit a number of towns throughout Te Waipounamu to deliver the kaupapa to more communities. He also hopes to have more opportunities to collaborate as a rohe with local iwi, working together to normalise and celebrate the nuances of te reo Māori.

“First and foremost, my goal and aspiration is to show people that te reo Māori is so much more than a language used on a marae. It’s beautiful listening to our language on the marae, but you can also use it to describe every facet of the world, and everyday words.”

To keep up-to-date with the Matthews whānau and their te reo Māori journey, like their Facebook page:
www.facebook.com/whanaumatthews

Kotahi Mano Kāika (KMK) is the Kāi Tahu language strategy that aims to promote and revitalise Kāi Tahu reo with the goal of having at least 1,000 Kāi Tahu households speaking te reo Māori by 2025. To find out more or to participate at an upcoming KMK event, visit:
www.kmk.maori.nz or call 0800 KAI TAHU (524 8248).