Over the last year and a half, a rōpū of wāhine have been reclaiming the sacred art of karanga through a series of intensive wānanga offered by Te Wānanga o Raukawa in conjunction with the Nelson Marlborough Institute of Technology (NMIT).

Earlier this year, with the support of the Ngāi Tahu Fund, the rōpū began learning te reo Māori to assist their mātauranga. Kaituhi Arielle Monk was privileged to attend a wānanga to learn more about their journey.

Liz Kereru emerges from the tumbling surf, a small figure in the endless stretch of North Canterbury horizon. Sunshine warms the crisp autumn air, catching glistening droplets as she tilts her head to smile at Ranginui.

The visual metaphor could not be stronger – mana wahine, the sacred feminine.

Two wāhine follow her out of the waves, while others wander along the beach. Some are deep in kōrero, and others walk in solitude; bending now and then to touch the treasures of the shoreline.

Some are connected already in their own worlds outside of this moment. Others have never met before coming together in this space.

This is karanga wānanga.

Somehow, Liz’s signature red lippy is still intact after being submerged. There is a sense of vitality to her face as she surveys her tauira wāhine dotted along the beach. She is talking about the act of cleansing wairua within the context of sacred arts – today, within the kaupapa of karanga.

“This is a time that is solely for the wāhine. Whenever planning our wānanga, I always make sure we are close to the sea. This morning, we are here to cleanse our wairua and if the wāhine feel drawn to, they are invited to immerse themselves in the healing waters,” she explains.

“The cleansing element of coming to Hinemoana is an opportunity for us all to come back to ourselves. It’s a chance for our wāhine to shed the burdens of what’s out there in the world and to be tau with themselves, with this kaupapa, and with each other.”

This is the second of four quarterly wānanga for these Waitaha students, now in their second year of learning about the art of karanga under the direction of Liz, who also has akomanga in Te Tai Poutini and Kaikōura. Liz is contracted by the Kurawaka Retreat Centre to deliver a three-year programme of study, developed by Raina Ferris.

Liz says her dear friend Raina (of the Sciascia whānau of Ngāi Tahu) began offering tutelage in karanga 18 years ago in response to the systemic loss of mātauranga around the sacred art form – an effect which Ngāi Tahu is one of many iwi to feel.

Liz’s tauira wāhine are a contribution to the revival and strengthening of paepae around Te Waipounamu. She says that after seeing how the work of Raina over the past 18 years has turned the tide of generational gaps in mātauranga and cultural practice in the North Island, she leapt at the opportunity to bring the same to Te Waipounamu.

“It was in 2012 that our then upoko of Ngāi Tūāhuriri, Rakiihia Tau Senior, sent me to learn from Raina. I was brought up in a way and time where you did as your elders asked, and I still live by that. So I went and it was in true old school fashion; we didn’t enrol or anything like that – just turned up,” Liz laughs.

“That was partly because our pae karanga at Tuahiwi needed to be strengthened, but also because Te Matatini was coming in 2015 and as mana whenua, we knew we needed to be stronger.”

With tautoko from numerous taua and colleagues, Liz brought the course to Te Waipounamu in 2013. Each of the three years is punctuated with four wānanga to review and reinforce the self-directed learning.

“We talk about specific kaupapa, our first wānanga looked at tangihanga – but people must realise, this is not just about karanga. It’s all-encompassing. It’s about how to prepare the marae when you are expecting tūpāpaku, how to compose the karanga. Through learning the mātauraka which wraps around karanga, we are able to hold and reclaim the old ways. Without it, we have nothing.”
Liz Kereru Ngāi Tūāhuriri

Although based in Mahia on the East Coast of Te Ika a Māui, Liz travels to Ōtautahi, Arahura, and Kaikōura 12 times a year to deliver the wānanga component through the Nelson Marlborough Institute of Technology (NMIT) under the umbrella of the Te Wānanga o Raukawa, as an NZQA qualification. This requires structure, lesson planning, assessments, and achievement standards.

But despite the education system’s requirements for structure, wairua still weaves its magic into the wānanga, just as the karanga weaves its invisible thread across the ātea from hau kāinga to manuhiri.

Each year has a clearly defined focus: tuatahi – the healing and reconnection to self and to te ao Māori through pūrākau; tuarua – an in-depth immersion tikanga and overviews of different karanga, as well as an introduction to technique and practice; and tuatoru – an intensive continuation of Year Two.

Interviewing a rōpū of wāhine entrenched in karanga wānanga is beautiful to behold. The women squeeze into place over porridge and cups of tea, removing the chill of Hinemoana from their bellies. There are arms around one another, intense and emotional kōrero, and a genuine desire to share what they have learned and gained – and, of course, no wānanga is complete without the background chatter of tamariki.

“I just wanted to learn the reo any way I could; and when this course came up, it seemed like another way to do that. But I ended up crying for the whole of the first year,” Jaci says.

The first year, Liz explains, is about an internal awakening.

“Once the wairua has awoken, everything else in life will flow. Raina likens this course to the growth of the butterfly. The wāhine come in at a caterpillar stage, and, as they are munching away on the green leaves of mātauraka, they start to evolve into a butterfly. And that is so true of Jaci.

“The world we live in discourages our connection to our own wairua. Once that reconnection starts in a wahine, that’s when the crying comes for many. That’s why we have so much time spent in preparation. Our wāhine need to find the voice within again.

“This wānanga brings up so much about identity and relationships with themselves, their culture and their tīpuna. The importance of knowing who you are and of feeling whole is not to be underestimated.” 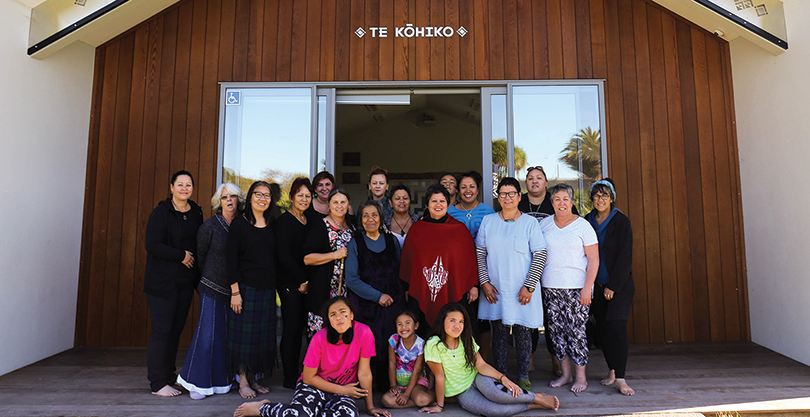 Above: Karanga akomanga, kaiako and kuia gathered outside their place of learning, Te Kōhiko at Kaiapoi High School.

“Āe, she cried and cried in the first year and I thought, ‘Gee, she’s not going to last!’ But here she is, and standing out on the pae as well. Jaci has just opened her wings and flown.”

For Liz – and the foundations of practicing karanga – tikanga is everything.

“We talk about specific kaupapa, our first wānanga looked at tangihanga – but people must realise, this is not just about karanga. It’s all-encompassing. It’s about how to prepare the marae when you are expecting tūpāpaku, how to compose the karanga. Through learning the mātauraka which wraps around karanga, we are able to hold and reclaim the old ways.

“Without it, we have nothing. For example, if we don’t have tikanga, where does the reo sit? On these courses, there is no requirement to have the reo, but you must follow tikanga. Here, we are crawling – and alongside us, the reo will grow.”

In 2012, TE KARAKA interviewed taua and wāhine across the Ngāi Tahu takiwā and highlighted a concern for the spiritual safety of wāhine with limited reo Māori practicing karanga on the marae.

That’s why there is now a concerted effort to bring reo Māori akonga to the rōpū. Through the Ngāi Tahu Fund, tauira Sarah-Jane Paki (Moeraki – Ngāi Tahu) recently secured these classes, allowing the wāhine to grow their reo as a collective.

“We need the language to revitalise pae karanga on our marae, but being able to develop that reo in a safe space, carrying the energy we have created here together, is important,” Sarah-Jane says.

As a kaiako within the kura of Te Kura Motuhake o Te Ataarangi ki Wairoa, Liz feels confident that with the foundations of tikanga, the language will follow closely for most tauira.

“I believe this kaupapa is driven by wairua and by our tīpuna. So many aspects come together at the right time because of forces at work behind what our eyes can see; the reo will come in time for the ones who need it most.

“It is in the way that I plan every wānanga lesson, but I never plan for our kuia to attend. They just turn up in the nick of time.”

Like tuning in to the radio, these elders seem to know when they are needed – they are called by a higher frequency that not all of us can hear.

“We live too much in the materialistic world and we’ve lost a lot of te ao wairua. But we are blessed that our taua are still attuned to that wairua and can come in to tautoko and advise, just as we have Aunty Bertie (Roberta Arahanga) here this weekend. It’s also good for me as a tutor because, while I am delivering the content, having them along affirms what I am teaching. They’ll often chime in to say ‘Āe, I remember that’s how it was.’ It’s confirmation of the mātauraka that I’m transferring to the girls.”

Liz acknowledges her mother, Te Ruahine Crofts, and her godmother Heeni Phillips for instilling in her ngā taonga tuku iho; taua Patricia Anglem, and the many taua of Tuahiwi for their support as whakaruruhau (sheltering forces) as she brought the course to Te Waipounamu.

“Te Whe (Hutana) was right here with me from the beginning. The same goes for Aunty Ranui (Ngarimu); she’s been a huge supporter and is still very much involved. She is my mentor who I look to and learn from, and she knows my every move, of course,” Liz says fondly.

“I grew up with my mum and dad, but as the youngest, I was often taken along to various kaupapa and so also grew up with everyone else’s parents and with aunties and uncles. I was a sponge, soaking all those kaupapa and the ways of our people, and I now see that as preparation for my mahi today. Now I know why I was so lucky to have that – for this right here.

“I truly feel that this is my calling, this is my purpose. And now, my way of life is like the vibration of my karanga.

“If we keep doing what we’re doing, our future as a people is bright.”