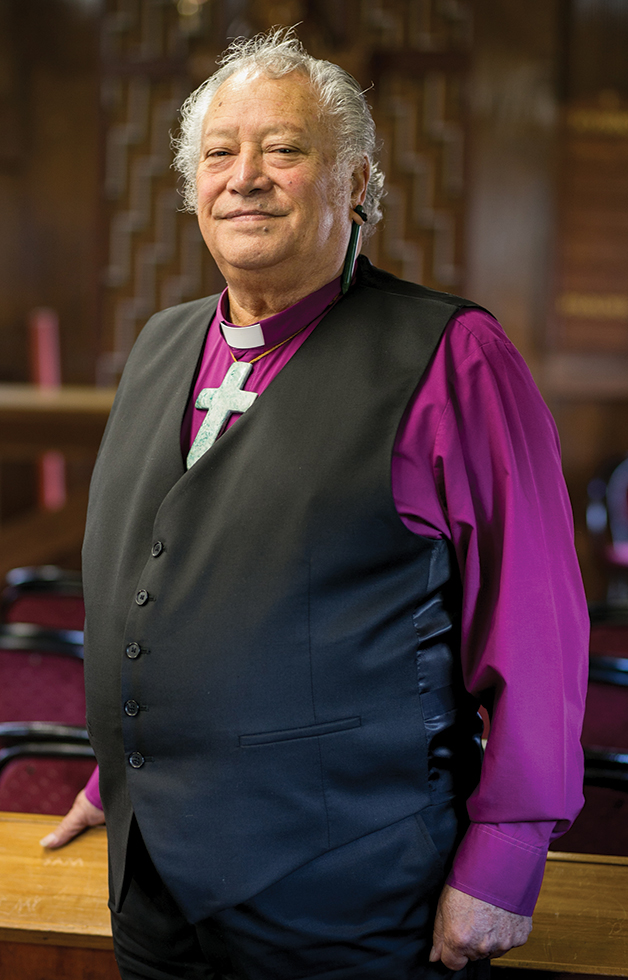 The Right Reverend Richard Wallace, newly consecrated Bishop of Te Waipounamu, seems perfectly at home when I visit him at his office at Te Hēpara Pai in Christchurch. However, 40 years ago he would never have imagined he would hold this role. The two things that have remained constant throughout his life are his deep connection to his iwi, and his enduring faith in Christ.

Bishop Wallace speaks fondly of his early childhood. “In those days the whole village brought us up really, the whole of Little River,” he remembers. “It was lovely, it didn’t matter where we went, we were looked after.”

When he was 11 years-old he was sent to live in Tasman, and it was while living there and attending Motueka High School that he had the first inkling he wanted to work in the church. He met members of the Christian Brethren Church and discovered that the messages of love and inclusion they preached resonated deeply with him. “I was 12 years-old when I gave my life to Christ, I gave my heart to Jesus,” he says. “I had this sort of spiritual calling, and I could see places right throughout my life where it happened.”

But it wasn’t until he met his wife, the Venerable Mere Wallace, that Bishop Wallace found his way home to the Anglican Church. When he was 17 he joined the Royal New Zealand Air Force (RNZAF), where Mere also worked. He spent time at RNZAF bases in Wigram, Hobsonville, and Ōhakea, where he and Mere began dating.

“When I went up to meet the parents they said, ‘If you want to marry my daughter, you have to be Anglican,’” he laughs. “So I went up to the church there and was baptised an Anglican, and we got married.”

Bishop Wallace began attending Anglican services regularly, but at that stage he had never considered the idea of entering the ministry. “My mother-in-law told me I’d make a nice minister, but that was the last thing on my mind!”

He remained in the air force for nearly 12 years, returning to Christchurch after he was discharged. “I started attending the Church of the Good Shepherd in Phillipstown,” he says. “I started going regularly when Brown Turei, who became the Archbishop, was the Missioner there.” It was the example of Brown Turei that led to Bishop Wallace becoming a kaikarakia, or lay minister, and seven years later an ordained priest.

In fact, the first time the Bishop considered entering into ministry was after the commissioning of his predecessor Bishop John Gray as kaikarakia in the Church of the Good Shepherd in Phillipstown.

“Following the service I was helping by cleaning the floors in the whare horoi (bathroom) at Te Rau Ōriwa Marae (in Whanganui), and I heard a voice say: ‘I suppose you will be next,’” he says. “I was a little stunned and then I saw the Reverend Brown Turei’s wife cleaning the next stall!”

His first role was as an assistant minister in Christchurch, but in 1989 he was installed as the first Māori Missioner for Nelson. Over 12 years in Nelson he progressed through the ranks of Canon and Archdeacon, before relocating to Hokitika to become the Archdeacon of Te Tai Poutini.

Being elected to the role of Bishop of Te Waipounamu has meant a return to Christchurch for Bishop Wallace, and a sad farewell to Hokitika which has been home to the whānau for 17 years – although he will continue in his role as Upoko of Te Rūnanga o Makaawhio. The transition was made easier by the comfort he felt at returning to Te Hēpara Pai, which is now located on the same site as the former Te Waipounamu College that Mere and their three daughters attended as boarders before its closure in 1990.

When describing the first few months of his tenure, “busy” is the word that keeps coming up. “I was sure that there was going to be quite a bit of work,” he says. “But I’ve never spent so much time sitting at a computer, writing letters and carrying out some of the duties that a Bishop does.” Some of the more notable events he has been involved in have included the tangi of his mentor Archbishop Brown Turei, as well as the opening of Te Hapa o Niu Tīreni at Arowhenua.

One of the Bishop’s first priorities is strengthening the relationships between individual rūnanga and the Anglican Māori Diocese. “I’m planning on going to each of the areas and looking at the ministry in each rohe,” he says. “I want to build a strong ministry team through the South Island, and ensure they have a relationship with their local rūnanga.”

One thing that stands out to the Bishop from his own experience is the notion that people let their faith lapse because they find it too difficult to reconcile regular church-going with their lifestyles. This should not be the case, according to Bishop Wallace.

“Christ is in everything and is everywhere,” he says. “Therefore don’t look at it as turning away. Take it with you.

“There’s a song that says, ‘The place where I worship is the wide open places, built by the hands of the Lord.’ And to me, that’s the essence of God.”

Bishop Wallace also hopes to use the influence of his role to affect positive change in the area of family violence. “I’m quite passionate about this, about bringing about a non-violent society,” he says seriously. “That’s what I try to encourage and preach about. I’ve worked [in the area] extensively over the years, helping to set up anger management programmes in Nelson and Hokitika.”

The key, he believes, is restoring to women the respect and status they have traditionally held throughout the history of Māoridom, but which has slipped away in more recent years. “I remember an interesting argument between some of my tāua and a kaumātua who always berated them and said they were trampling on his mana,” Bishop Wallace recalls. “He started reciting his whakapapa, but he couldn’t get anywhere without recognising a female ancestor. My tāua used to laugh and say, ‘Leave us out and see how far you get.’ I’ve always remembered that.”

This lesson has served Bishop Wallace well, as his own marriage has remained steadfast throughout his career. It helps that his wife Mere is actually an archdeacon herself. “When I was elected, lots of bishop’s wives tried to tell her what to expect and what her role is, and she said, ‘Hang on, I’m an archdeacon in the church. I know how to handle this.’”

Bishop Wallace and Mere have two surviving daughters, as sadly their middle daughter passed away with breast cancer. They also have two whāngai sons that they raised from infancy. They are the proud pōua and tāua to 10 mokopuna, most of whom they have had a close hand in bringing up. “We’ve always had grandchildren living with us,” Bishop Wallace says fondly. “At the moment we’ve got one grandson and his daughter in the house.”

Bishop Wallace extends this inclusive attitude to his ministry, and says he hopes that whānau members will not hesitate to approach him. “When I started this role I said I wanted an open door policy,” he says, smiling. “When my door is open, anyone can come in to discuss anything with me, or even just to have a cup of tea.”