Lynne-Harata Te Aika had the choice of two languages at school – French or Latin. And English of course, but that was it. Te reo? Fat chance.

“At high school in the late-1970s, I wanted to study te reo Māori. But you either did French or Latin or you did the commercial stream.”

Her chance came as a teacher trainee in Christchurch and she grabbed it. It was like opening a door into a room she always knew existed but hadn’t been allowed to enter, says Lynne-Harata (Ngāi Tahu – Ngāi Tūāhuriri, Ngāti Awa, Te Whānau-a-Apanui).

At 21, her son Henare (Ngāi Tahu – Ngāi Tūāhuriri, Ngāti Awa, Ngāti Kahungunu), is part of Ngāi Tahu’s second wave of bicultural speakers, a fluent speaker of te reo because his mum was determined he would be raised that way. With a Bachelor of Language at CPIT specialising in Māori, he is now completing a post-graduate Diploma in Secondary Teaching at the University of Canterbury College of Education. 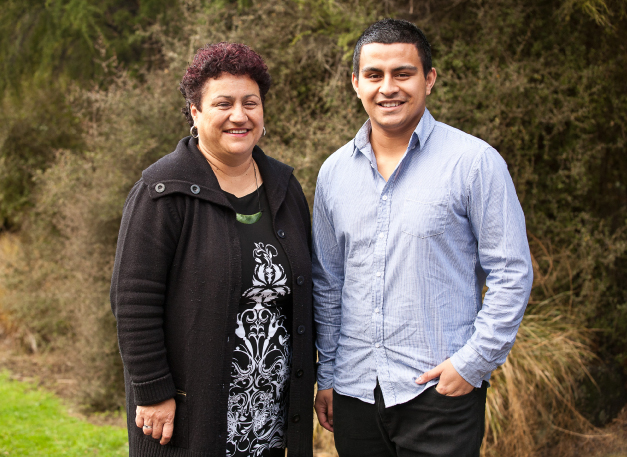 So while Lynne-Harata grew up in Timaru not even realising some street names were in te reo Māori, Henare, and his younger brother Te Mātauira, are confident in both te reo Māori and English. Does it make a difference and if so, what?

It’s not just about fluency, says Henare. It gives him a sense of belonging.

“I think it steered me in a direction … gave me some purpose really. I have been brought up under her wing and language strategies is what I know. I think I am on the same waka as her.

“And it’s good. There is a hole in your heart, it’s hard to describe but doing this sort of stuff fills it. It’s also about belonging. We moved back to Tuahiwi because we wanted to reconnect with our community, our hapū, our kāinga,” says Henare.

“And our extended whānau who were living there,” adds Lynne-Harata. Henare is living her dream, she says. “I didn’t make him,” she adds. “He’s following his own passion. At his age he is fluent in Māori, fluent in English, and he is only 21 for goodness’ sakes. It’s taken me double that time to get there.

“What I was trying to do – and this is before I got involved in tribal activities – was to give my children the opportunity to learn the language from birth so it wasn’t their fourth language, and to give them an insight into Te Ao Māori.”

When the strategy was launched, perhaps five Ngāi Tahu families spoke te reo at home. Currently between 20 and 30 families use te reo Māori at home as their primary language. And a large number of Ngāi Tahu whānau have committed to supporting or encouraging bilingualism in their homes, ranging from who use the odd Māori word here and there to those who use an equal amount of Māori and English daily with their tamariki.

Lynne-Harata still sits on the strategy advisory committee. At the same time she was focused on te reo in her community at Tuahiwi and at tertiary level.

After the family moved to Tuahiwi, she was a leading force in establishing a bilingual unit at Tuahiwi School and later set up Hōaka Pounamu, the bilingual and immersion teacher-training programme at the University of Canterbury, where she is head of Aotahi, the School of Māori and Indigenous Studies. Lynne-Harata was also one of the first graduates from the first intake of students to Te Panekiretanga – Institute of Excellence in the Māori Language.

She is renowned as a teacher, researcher and an advocate with research interests in Māori education including the journey from bilingual and immersion education from birth through to tertiary level.

With so much chatter around the best ways to ensure te reo survives, what do Lynne-Harata and Henare see as the best way to keep the language alive?

Plug in at every level is the answer. Ensure children have the chance to learn from birth to a tertiary level and beyond and ensure te reo is spoken when and wherever possible.

For any language to survive, it needs to be spoken in homes, leading to what the experts call ‘intergenerational language transfer’.

But te reo also needs fluent teachers coming through at a tertiary level, says Lynne-Harata, who has been teaching at Hōaka Pounamu for the past 11 years.

“We had that triangle shape with lots of teachers at the bottom, very few in the middle and at the top. Setting up the bilingual teachers’ programme, which is a post-grad programme now, was important. We have to get the quality of the teaching right. We’ve had 120 graduates in the last 11 years, which doesn’t sound a lot but it has made an impact.

“So many of the activities I have been involved in and that have motivated me have been initiatives not just for my children but for whānau, hapū, and iwi, particularly at Tuahiwi, but also at our other papatipu marae where we have held language wānanga for the tribe,” says Lynne-Harata. “We grew up away from the language, away from our home and our tribal identity so when we came back to Christchurch, I was determined to accelerate my children’s understanding of their Ngāi Tahutanga.

“It’s disrupting that loss of language and there was an opportunity at the school to revitalise the language and also to help revitalise our understanding and use of tikanga, our protocols as Ngāi Tūāhuriri.

“It was like unblocking a tap. It had been all blocked up and there was no cultural flow and suddenly people wanted to join the programme. People travel from Christchurch now and Rangiora and Kaiapoi and further afield to go to the school and connect with either their own hapū or a tribal initiative. That’s been the fantastic feeling for me – that others can enjoy learning the language and have their identity as Ngāi Tahu affirmed every day.

“Since we implemented the language strategy, we are growing our speakers of te reo.

“At the tangi for Maruhaeremuri Stirling, there were several women doing the karanga who have become proficient in the language and there were several young men doing the oratory. We couldn’t have done that five years ago, we would have been scratching to have a pool of speakers of language with that high level of fluency, so that was a proud day for me seeing that.

“I think the exciting thing about Henare and other young people is how they have short-circuited the process and learnt the language in a really short time. I am envious that he was able to do that but it is still the start of the journey.”