The thrill of the game

There’s nothing that stirs the blood more than seeing the black jersey and silver fern excelling on the international stage – something about it just spells home. Nā Jackie Curtis. 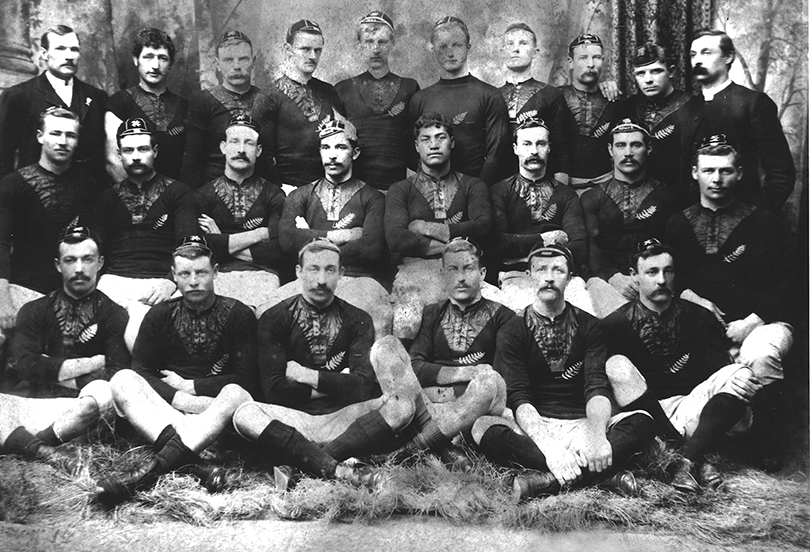 But many sports fans may not be aware that Ngāi Tahu has particular reason to feel pride in the All Blacks jersey – the design has direct whakapapa to whānau via Thomas Rangiwahia Ellison.

Also known as Tom or Tamati Erihana, he toured Great Britain and Australia in 1888/89 as a member of the New Zealand Natives football team, playing 107 matches in 54 weeks, 16 of which were spent travelling. Thomas finished the tour as the team’s second-highest point scorer with 113 points, including 43 tries.

His mother, Nani Weller (Hana Wera), was the only child of whaler Edward Weller and Nikuru, daughter of Taiaroa. His father, Raniera Taheke Ellison, was the son of Thomas Ellison and Te Ikairaua (Te Ikaraua) of Ngāti Moehau, a hapū of Te Āti Awa. His father, it turns out, had ventured south in 1862 searching for gold.

His rugby career began in 1882 when he won a scholarship to Te Aute College in Hawke’s Bay, and he started as a forward before moving to the wing. When he shifted to Wellington he played half-back for the Pōneke Football Club, and in 1902 he published The Art of Rugby Football, one of the game’s first coaching manuals.

Following his success with the New Zealand Natives team, Thomas was selected in 1893 not only as a team member, but as captain of New Zealand’s first official rugby team to tour Australia.

But before the 1893 tour he proposed to the first AGM of the New Zealand Rugby Football Union that the team’s uniform be a black jersey with a silver fern monogram, matched with a black cap and stockings and white shorts. With a switch to black shorts in 1901, this became the now famous All Blacks playing kit. 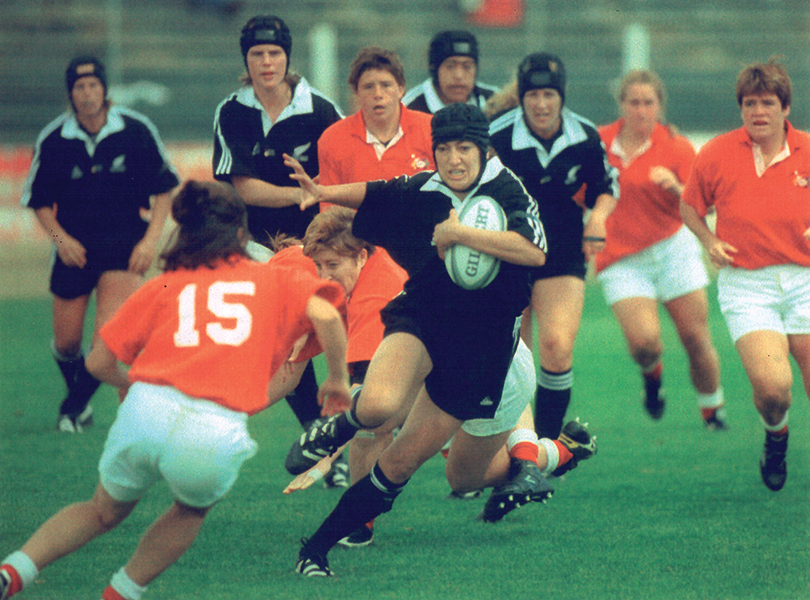 Above: Melodie Robinson playing for the Black Ferns.

Off the field Thomas Ellison became an interpreter in the Native Land Court in 1886. He had a particular interest in Ngāi Tahu land claims, but failed three times to get elected to Parliament as the member for Southern Māori. In 1902, while working for the Wellington law firm Brandon, Hislop and Johnston, he became one of the first Māori to be admitted to the Bar.

Melodie Robinson is better known today as a sports journalist and presenter, but she has also donned the black jersey as an international rugby union player for the Black Ferns. Melodie played 18 tests as blindside or openside flanker from 1996 to 2002, with the team winning two Rugby World Cups in her time. She also represented the Black Ferns Sevens in Hong Kong and Japan. Like Thomas Rangiwahia Ellison, Melodie has strong whakapapa ties to the game, with her great-great grandad and great-great uncle playing for the national side.

Her great-great uncle, Toby Robinson, from Little River on Banks Peninsula, was selected to play in the All Blacks twice against New South Wales in 1928 and Melodie’s great-great grandfather, Tom Robinson, gained selection as a 20-year-old for the Māori All Blacks tour of 1926-27. This tour was a collection of rugby union games by the Māori All Blacks against invitational and national teams from Australia, France, Great Britain and Canada. The team won all but five of their European games and all the Canadian games, but more importantly they are credited with the French team adopting the New Zealand style of play. 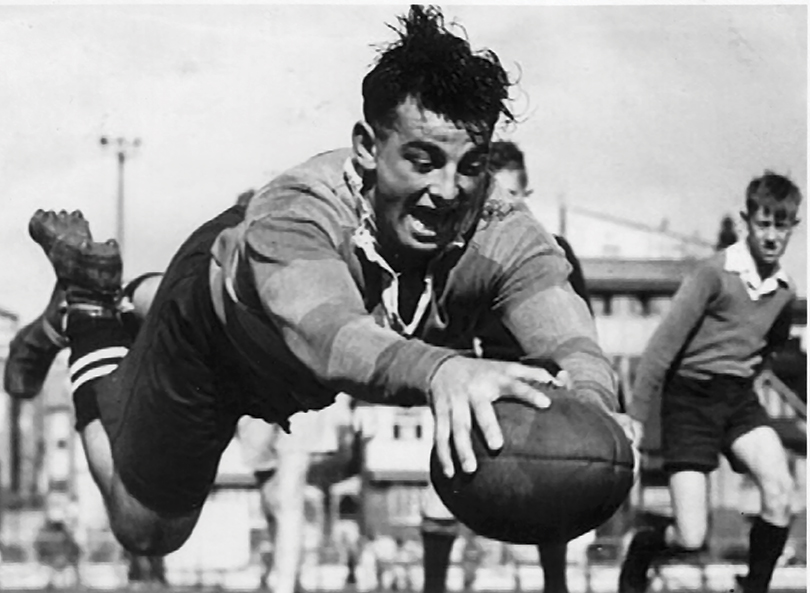 Melodie remembers watching the Rugby World Cup with her dad and clearly thinking that she wanted to be an All Black without realising girls were not allowed to play in the national team. So when she started university at Otago, she joined the women’s rugby team and her dad became her most loyal fan.

“As a child I spent my weekends at Little River, in a community that is obsessed with rugby. At the clubrooms there was so much All Blacks memorabilia and I really didn’t understand the strength and significance of that until I started playing myself.

“Perhaps my proudest playing moment was winning the World Cup. The women’s team used to call the cup Nancy Wakefield and unlike the men’s trophy we got to take turns at taking it home. I had Nancy in my bedroom for six weeks after winning. I was so proud of that.”

She says her pōua Francis also loved rugby and continued to play as a 62-year-old front rower for the Little River team.

It was 1949 that was to prove to be the year of controversy when Ben [Couch] and other Māori were ruled ineligible for selection for the All Blacks tour of South Africa because of its apartheid policies. There is a certain irony in this as Ben’s great grandson, Brigham Rīwai-Couch, travelled to South Africa to play a game of rugby while at Christchurch Boys High School, 69 years after his great grandad was denied entry.

A story of the All Blacks wouldn’t be complete without mention of competition against one of our more controversial opponents – South Africa. While the history of the 1981 Springbok tour of New Zealand that contributed to the downfall of apartheid is well known, the controversy in relation to our All Blacks goes back much further.

Ngāi Tahu first five-eighth Manuera (Ben) Couch represented Wairarapa at a provincial level, and was an All Black from 1947 to 1949.

However, it was 1949 that was to prove to be the year of controversy when Ben and other Māori were ruled ineligible for selection for the All Blacks tour of South Africa because of its apartheid policies. There is a certain irony in this as Ben’s great grandson, Brigham Riwai-Couch, travelled to South Africa to play a game of rugby while at Christchurch Boys’ High School, 69 years after his great grandad was denied entry. 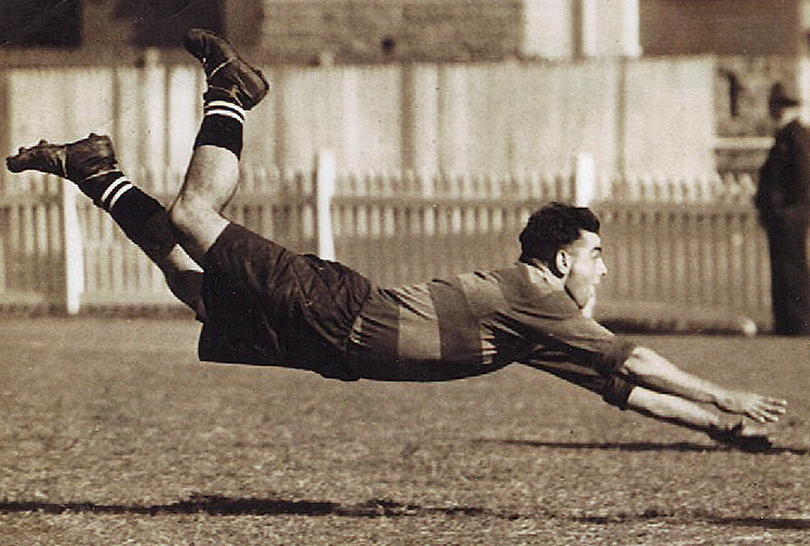 Brigham was selected to lead the haka as a tribute to Manuera Couch saying, “I’ve heard a lot about my grandpop – I know that he could kick off both feet. He was a very skilled man. And he was well known for his honesty and integrity as a human.”

According to Brigham’s dad and Manuera’s grandson, Jared Riwai-Couch, Manuera was hugely disappointed to miss the tour.

“At a very young age Manuera was sent from Rāpaki to Kohunui Marae in the South Wairarapa to milk cows for his uncle, Jack Riwai. This new lifestyle prevented Grandad from dipping his finger into the tops of whānau milk bottles around Rāpaki. Apparently he liked to sample the cream and then replace the lids without the homeowners knowing.

“After the morning milk, Uncle Jack would send Grandad, who was only a lad, down to the bottom paddock with a rugby ball. Uncle Jack had a stock whip. When he cracked the whip to the left or the right of him it was the signal for which foot Grandad had to use to punt the ball and run to catch it on the full. This is how Grandad maintained his fitness as well as speed.

It also enabled him to develop an educated boot off either foot with accuracy at a time when it was relatively uncommon. 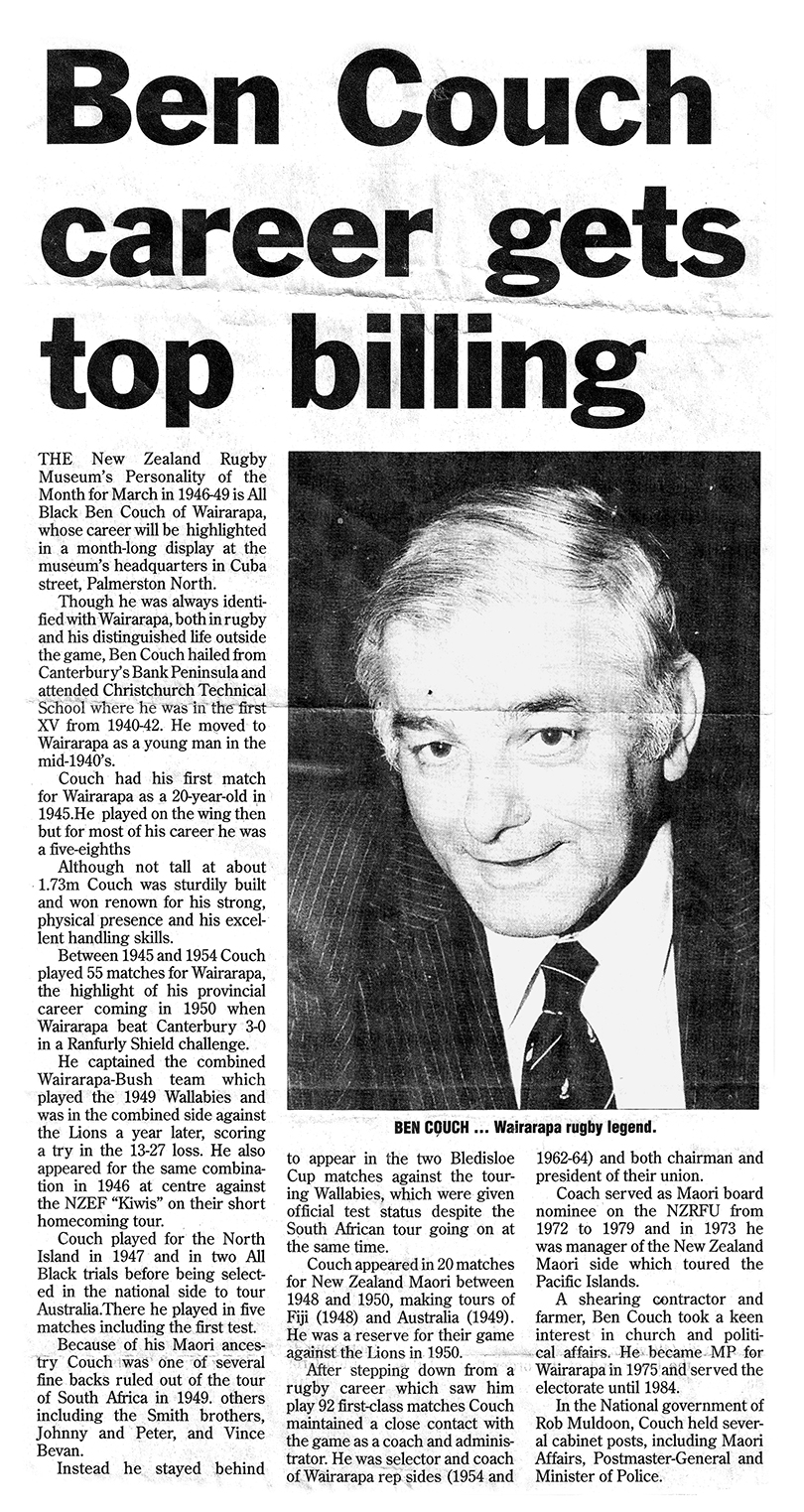 “Grandad returned to Rāpaki several times in his younger years and although he settled in the Wairarapa after meeting his sweetheart, Nana Bessie, he made sure at every opportunity to visit his whānau in Te Waipounamu.

“Grandad rarely spoke of his disappointment in not being selected to play in South Africa. However, he did make long and lasting relationships with players and administrators that continued over many years as Grandad served in our own national rugby administrations and as a Member of Parliament.

“I know he would have been proud to see his great grandson Brigham lead the school haka and take the field in the Republic,” said Jared.

In acknowledgement of the strong following of the black jersey in New Zealand, Ngāi Tahu Tourism has partnered with New Zealand Rugby to create the All Blacks Experience in Tāmaki Makaurau. The All Blacks Experience, which opened earlier this month, guides visitors through a state-of-the-art showcase of the All Blacks, the Black Ferns, and our other national rugby teams in black. The centrepiece of the guided tour gives visitors the chance to stand in the middle of the field in a stadium packed with fans, and literally come face-to-face with a 4-metre-high haka. The journey also includes first-hand stories from legends of the game, and a chance to try kicking, catching and lineout skills against today’s All Blacks and Black Ferns, in the hands-on interactive zone. It is located within the SkyCity entertainment precinct.