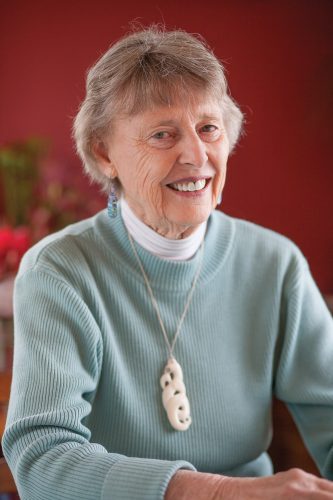 Denise Sheat is not a woman of airs and graces. In her mind there is no time for pomp or ego when there is so much work to be done. This humility is all the more likeable for the fact she is a veteran advocate for Māori education and biculturalism in Aotearoa, and a long-serving member of Te Taumutu Rūnanga, while representing Ngāi Tahu in various governance positions.

Earlier this year, her dedication to promoting and growing biculturalism in Aotearoa was officially recognised when she was awarded the New Zealand Order of Merit for services to Māori and Education.

Yet there is no arrogance about her. I arrive late at our interview after a previous appointment, but in reply to my jumbled apologies, she calmly says, “Don’t bustle yourself dear, you’re doing me a favour because I really should get on to some work around here.”

We exchange our respective whakapapa and make connections and, having established who we are, we crack on with the interview at Denise’s behest. And it’s that keenness to get on and do what needs to be done that attracted the unexpected but not unappreciated accolades this year.

The youngest of four children, Denise (Kāi Tahu, Ngāi te Ruahikihiki, Ngāti Rangi-a-moa) was born in Christchurch. When she was 25, she married John, who has now passed away, and began a rural life spanning almost 50 years on the Canterbury Plains. It was here she first fell in love with the idea of true biculturalism in one of the most unlikely of places – Burnham Military Camp.

“I left Christchurch and went to Dunsandel when I got married, and found it to be a bit behind in bicultural understanding. I didn’t really enjoy teaching there, so thought I would go out to Burnham where I noticed around 50 per cent of the children were Māori.

“For miles around there was not a school like it. It was a vibrant, inclusive school, but apart from an excellent kapa haka group, there wasn’t any kind of bicultural programme. The kōhanga reo movement had just started and I went along to their meetings in Burnham. I was so inspired by the ideas of those committed young mothers.”

Denise says the thought of tamariki coming through from kōhanga total immersion only to land in her primary school class and lose their Māori language through disuse horrified her.

“We had to pull our socks up,” she laughs, remembering her determination at the time. And so began her personal journey in te reo Māori. She would go along to the padre’s hut for rudimentary lessons after school once a week and on some weekends.

“It was really the Ngāti Porou women who taught me. They must have wondered what this fair-haired, blue eyed girl was doing. Eventually they realised I was Ngāi Tahu.”

As her understanding grew, she began to craft biculturalism into her daily teaching and soon had Māori parents from the army requesting a spot in her class for their children. The relationships forged with many of these parents drew Denise into one of her first committee roles – secretary of Te Whānau o Tūmatauenga. The committee met regularly to confer on family issues within camp, from community events through to encouraging te reo Māori. This strengthened the relationship established by Riki Ellison between Taumutu and Burnham Military Camp. Around this time, Denise started attending Taumutu Rūnanga meetings.

“I wouldn’t say it was an accident (this career path). It was more because I was longing for a change, and I wanted to learn more so I could help make it happen. I was impatient. Being secretary was like a baptism of fire, I was writing down ‘tomato’ for Tūmatauenga, and hoping I would remember to ask how to spell it afterwards. George Skudder was the president and he and his wife Bim helped educate me.”

Denise credits the near decade she spent at Burnham as the most special time in her career in education, and wraps it up with an anecdote. “I was sitting inside, about to open the door for class, and there were two boys sitting outside on the steps. One said, ‘Mrs Sheat is a Māori, you know’, and the other replied, ‘No she’s not, she’s Pākehā’, to which the other replied, ‘Yes she is, I’ve seen the Māori spots on her arm.’ I nearly died of laughter when I realised he was of course talking about the moles on my arm.”

“We liked to go where there were high numbers of Māori children, but it’s also important for all children to learn about biculturalism and what that means in New Zealand. I would go into some schools where parents appeared to be unaware of this.”

Although she didn’t grow up with te reo Māori in the home, Denise feels she grew up in a home rooted in manaakitanga and whanaungatanga, especially when her Māori grandmother was around. This upbringing, although sometimes marred by the toll war had taken on her father, began her journey as a bicultural New Zealander.

In the mid-1980s she was recruited by the Ministry of Education as a resource teacher of Māori. She travelled around Canterbury and across to the West Coast to teach schools how they could better honour their Treaty of Waitangi commitments to bicultural education, and to help with their Māori programme, Taha Māori, in the classroom.

“We liked to go where there were high numbers of Māori children, but it’s also important for all children to learn about biculturalism and what that means in New Zealand. I would go into some schools where parents appeared to be unaware of this, and I would explain that their children may not be growing up and remaining in the district; they’d be adults in a New Zealand where Māori culture is given a much higher priority and their children would be socially disadvantaged if they didn’t learn how to embrace this. It usually got their attention.”

If bicultural understanding was so new for the education sector at that time, how did anyone know what they were doing?

“Oh, we made it up as we went,” she jokes. “Bev and Bill Gillies from Rāpaki and others had started a good service, but they needed a bigger team. There were some stalwart people who had been doing their best for years, and others who came to help.”

From Katarina and Monty Daniels to fellow resource teachers and advisors Mike Davey, Amosa Fa’afoi, Hone Apanui, and Cass and June Tangaere, Denise credits many others with the success and groundwork she helped create for Māori education in Te Waipounamu.

Despite her love for the job, in 1994 her husband’s poor health prompted Denise to accept a position lecturing in Māori education at the Christchurch College of Education in Christchurch with Tom Rangi and Marge Wong. Although the day-to-day travel was arduous, it was much less than in her role as resource teacher, leaving more time to help John on the farm and be more supportive of elderly family members.

“I loved it at Teachers’ College because I realised we could reach more people than I could as a resource teacher. We thought we could train the students well and they would continue the good work in schools.”

“Our focus at [Te Taumutu Rūnanga] is on having a working relationship as mana whenua with Lincoln. With Ahumairaki we focus on attracting young Māori to Lincoln, making sure that courses are relevant, and interacting with Ngāi Tahu and Māori throughout New Zealand to create pathways into the university.”

She was often frustrated by the restriction of time and length of study of Māori at Teachers’ College, as it was never enough to get the students confident in using te reo Māori in a classroom setting.

“But what we could do was change their mindset at least, and we could really see that they understood that under the terms of the Treaty of Waitangi they should be delivering a bicultural programme within class. Hopefully they would continue to learn te reo Māori.”

During this time, Denise became the Ngāi Tahu representative on the Christchurch College of Education’s board, advising on tikanga and protocol with the University of Canterbury merger. Denise also represented Ngāi Tahu on the Arts Centre Trust for nine years before the earthquakes, and has been resident kaumātua at Ellesmere College for more than a decade. She sits on Lincoln University’s Māori Focus Group, Ahumairaki, on behalf of Taumutu. Denise is also the current kaumātua to the Canterbury branch of Early Childhood New Zealand, Te Rito Maioha, and acts as a cultural advisor for Kidsfirst Kindergartens/Canterbury Westland Kindergarten Association.

“Our focus at Taumutu is on having a working relationship as mana whenua with Lincoln. With Ahumairaki we focus on attracting young Māori to Lincoln, making sure that courses are relevant, and interacting with Ngāi Tahu and Māori throughout New Zealand to create pathways into the university.”

Denise served several terms as secretary of Taumutu Marae and was an education facilitator when the local story resource was published for the local schools. She led the education portfolio for some time and continues as a voluntary kaumātua, story teller, kaikaranga, and a stalwart of rūnanga meetings, with at least 25 AGMs to her credit.

Taumutu has a good relationship with at least 35 schools in its takiwā, and many early childhood groups. From the work of Riki Ellison and Cath Brown in the first place, followed by years of voluntary support from the loyal kaumātua group which includes Pat Nutira and Rosaline Brown, who is a remarkable teacher, story teller, and historian, there has been solid support.

Liz Brown is the portfolio leader now, and continues the work of organising an annual hui with all the schools where new resources are produced in response to requests.

Denise is happy that there are capable educators and a good facilitator stepping up to the mark. Her daughter, Tracy Rohan, is one.

Denise left Dunsandel five years ago, moving to Rolleston, and has continued her unwavering support for Māori education and biculturalism, all the while drenched in manaakitanga, and of course, sharing that cracking sense of humour.

“As next year will be my 80th year, I am thinking of slowing up a bit, doing my garden and a bit more art before I am too old. Being a kaumātua for Taumutu is a pretty busy job, which I will continue to enjoy.”