The world of virtual story telling 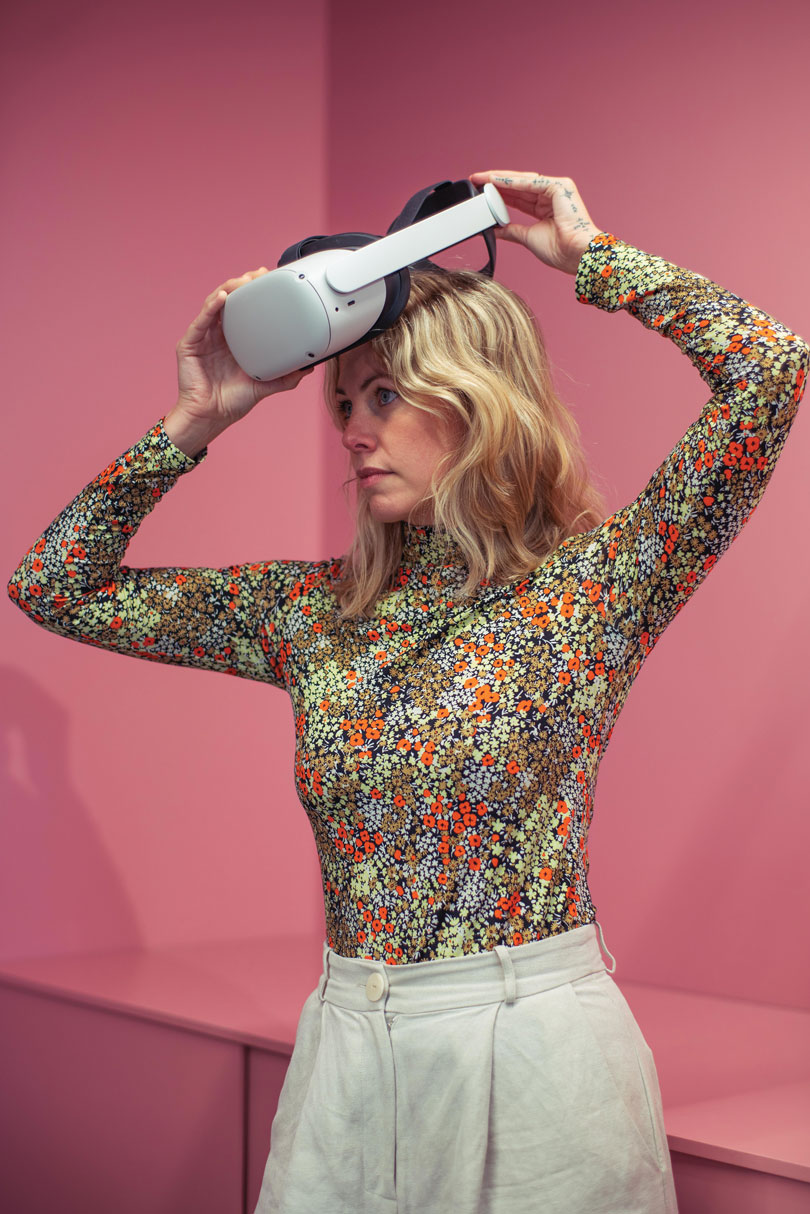 Kat Lintott, co-owner of Wellington-based creative agency Wrestler, uses virtual reality as a storytelling tool. In the worlds she helps create, users travel through space and time to tour virtual marae, navigate waka hourua or meet Hineraukatauri – atua of the pūtōrino. Kat talks to kaituhi Ila Couch about being an indigenous content creator and what excites her about storytelling and technology.

Kat Lintott has just returned from a city that only exists for eight days of the year: Black Rock City, a temporary metropolis created by tens of thousands of people who come to the Black Rock Desert of Nevada in the United States for a gathering known as Burning Man. Teams of artists from across the world populate the desert with sculptures and structures that encourage human connectivity and celebrate self-expression and self-reliance. It is a city created almost entirely by its citizens.

Due to Covid-19, the only way to experience Burning Man for the past two years has been through virtual reality, a computer-generated environment experienced with the use of a VR headset. Kat, who heads the Virtual and Augmented Reality projects at Wrestler, a storytelling agency she co-owns with husband, Ben Forman, says being able to attend the gathering in real life was an amazing experience.

“Burning Man is a celebration of what it is to be human,” says Kat. “One of the philosophies of Burning Man is once you get there, you can’t buy anything. Everyone shares everything. There is food, dancing, and thousands of pieces of art everywhere. You are living amongst giant sculptures that are 10 metres high. Everything is unfathomably giant.”

The daughter of retired Air-Vice Marshal, Graham Lintott, ONZM (Ngāi Tahu), and mother, Dianne, Kat was born in Singapore and spent her life living on air force bases around the world. “Change was always exciting for me. We would move every six months to two years for my whole childhood up until high school. I lived in London, Canberra, and all around Aotearoa.”

Growing up, Kat’s identity was that of an air force “brat”, but she says her paternal grandmother, Heather, would remind her of her whakapapa Māori. Kat remembers visits to Little Akaloa where her great-grandmother grew up, and having a sense of its significance to her whānau.

Other tangible moments of the whānau connection to te ao Māori came when her father began working closely with local Māori at Ohakea near Palmerston North where he was Base Commander. “He spent a lot of time with Māori within the organisation to re-establish the importance of tikanga and te ao Māori at the air force base. When Dad retired, he was gifted a korowai, which signified to us the importance of what he had done.”

Kat says she connected with her taha Māori when she started working with VR as a storytelling tool. “I had this dream of creating a 3D marae and putting a hologram of a person inside to experience what oral and traditional storytelling felt like in a modern, digital context. I thought it would translate well because it was immersive; much more so than a video talking to you.”

The Ngāti Awa wharenui was completed in 1875, but was disassembled and shipped abroad in 1879 against the wishes of its people. Mātaatua was sent to Australia and London where it was incorrectly reassembled and displayed as part of a travelling exhibition.

The wharenui came back to Aotearoa in 1925, but it was not returned home to Whakatāne. Mātaatua was gifted to Dunedin for display at the Otago Museum.

I had this dream of creating a 3D marae and putting a hologram of a person inside to experience what oral and traditional storytelling felt like in a modern, digital context. I thought it would translate well because it was immersive; much more so than a video talking to you.”

In 1996, Ngāti Awa negotiated its return as part of Te Tiriti o Waitangi settlement and the first piece of the whare, the pare or lintel, was brought home to Whakatāne by a Ngāi Tahu delegation from Ōtākou.

“Because of the history of the wharenui, it was important that everyone had the opportunity to have their say before we could move forward,” says Kat. “We were permitted to turn the whakairo of Irakewa, the founding ancestor’s story of Whakatāne, into photogrammetry. It was a process that involved taking lots of photos from different angles of the whakairo, this carving, and turning it into a 3D object.” 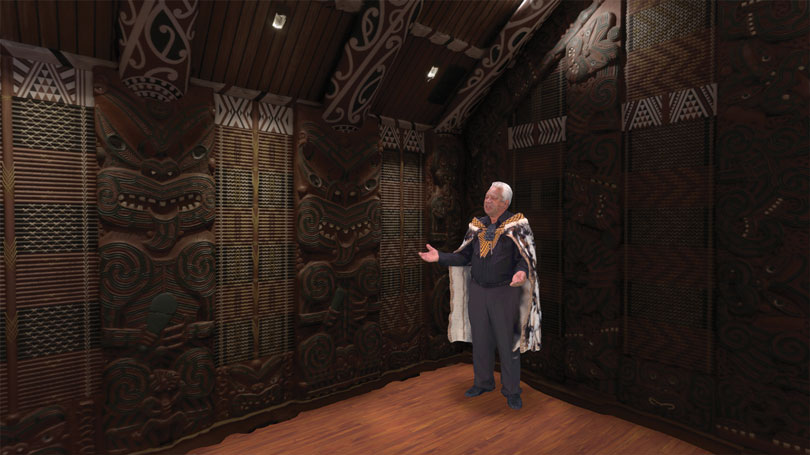 After pulling an all-nighter, the team was able to present their work to educator, author, and esteemed kaumātua, Sir Hirini Moko Mead, then in his early 90s. Sir Hirini was instrumental in negotiating the return of Mātaatua, so when his blessing was given to create a 3D model of the entire wharenui, it was a significant moment for everyone involved.

“His vision and support for this new technology, and exploring their (Ngāti Awa) stories in a whole new way, was inspiring,” says Kat. “We were grateful to be part of the journey.”

The resulting six-minute VR experience brings users of this digital technology inside Mātaatua wharenui where they are met by a hologram of Joe Harawira, the current chair of Te Rūnanga o Ngāti Awa, who shares the story of the whakairo of Irakewa.

Local rangatahi were involved in creating a VR game where they became the characters on the waka hourua, navigating the journey from Hawaiki to Whākatane. “They got to be on the waka, see the size of it and feel what it would have felt like – the textures of the wood, what the stars would have looked like. It was cool to hear them get excited about reconnecting to their whakapapa in such a different way.”

One of the benefits for Kat in co-owning her own company has been the ability to determine a kaupapa Māori approach to the mahi she does.

The project was officially selected for the 2020 imagineNATIVE festival in Toronto, Canada, the world’s largest presenter of indigenous screen content. With Covid-19 restrictions on travel, the global premiere of Mātaatua Virtual Reality ended up taking place in Whakatāne. “It worked out perfectly,” says Kat. “We brought the festival to the community, shared our work, and talked through how our project was made. We also got to see other indigenous films from around the world.”

Another project that brought Kat closer to understanding her whakapapa Māori, was Rangi Tūwhera Open Sky, a VR experience created with Te Whare Wānanga o Waikato. Users enter the ngahere where they can hear and interact with a 3D version of a real pūtōrino – a taonga pūoro made from two split pieces of wood, hollowed and bound together. The pūtōrino in Rangi Tūwhera Open Sky was played by tohunga taonga pūoro, Horomona Horo (Ngāpuhi, Taranaki, Ngāti Porou).

“There is a story wrapped around every taonga pūoro, and what we did was create an experience where you could meet the pūtōrino and hear its voice. We got to be in the presence of Hineraukatauri, the atua of flute music. It was such a cool experience to work with Māori choreographers, musicians, composers and 3D modellers.”

“There are characters we can follow through all their past lives, knowing that every decision they make will affect them in their future lives. It is a way of showing how indigenous cultures think in advance about the potential results of the decisions they make.”

One of the benefits for Kat in co-owning her own company has been the ability to determine a kaupapa Māori approach to the mahi she does. When New Zealand Police wanted a recruitment campaign to boost the number of wāhine Māori on the force, this model was presented as a way to proceed. 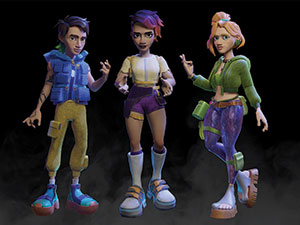 “We had as many wāhine Māori, and then as many Māori as possible on the film crew. We had Māori mentors and advisers, and we tried out a system where the crew was very separate from the police to give them the feeling of autonomy. In the advertising world, it’s not that common to have a kaupapa creative approach. That was the first time for us doing it fully from beginning to end.”

The making of Puhikura followed a documentary storytelling format and a diverse range of wāhine Māori were approached to talk about their experiences in the lead up to becoming police officers. “We wanted to know what was hard about it, why they wanted to do it, and what their friends and whānau thought.”

Kat says it was a challenge to find someone in Te Waipounamu, but when they did, she was a Ngāi Tahu woman who spoke to the rejection she faced because her life experiences made her an undesirable candidate for the police force. “Her story was incredible and made the whole series stronger,” says Kat.

As a mother of two tamariki, Kat is acutely aware of how important it is to create enriching experiences in a technological space that is overpopulated by violent video games and misogynistic content.

In addition to being on the board of the National Science Challenge uniting mātauranga Māori and Western science, and executive producing an eight-part comedy web series called Self Help, Kat and Ben hope for an end-of-year launch of their passion project, Soul Æther.

“We have always wanted to make a sci-fi fantasy world for the young adult genre, particularly for 12 to 17-year-olds, because it’s such an impressionable age,” says Kat.

“There are characters we can follow through all their past lives, knowing that every decision they make will affect them in their future lives. It is a way of showing how indigenous cultures think in advance about the potential results of the decisions they make.”

By creating a world where its characters live by a set of values – the core value being balance – Kat hopes its users will consider how we as humans navigate the balance between technology and nature.

“It’s not all about being in a digital space,” says Kat. “Everything I do – whether it’s video, documentaries, or virtual experiences – is about getting people to experience something entertaining, beautiful, or evocative that they can take back into the real world. That’s the mahi I get excited about.”