A rangatahi voice with impact

Ngā Manu Kōrero is an annual speech competition for secondary school students throughout Aotearoa. With categories for te reo Māori and English, as well as prepared and impromptu speeches, it challenges rangatahi to demonstrate their fluency in both languages and their ability to perform under pressure.
Kaituhi Alice Dimond catches up with this year’s winner, Hinepounamu Apanui-Barr. 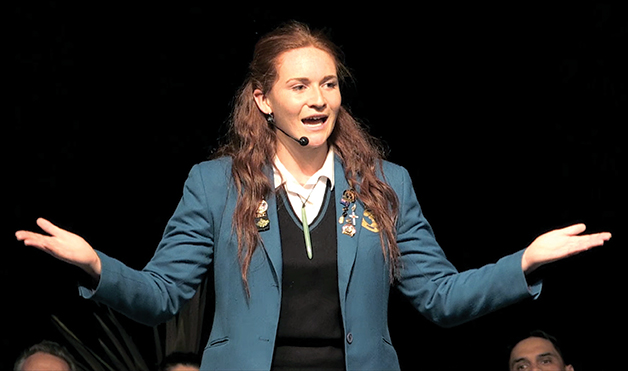 Hanging up the phone from Hinepounamu Apanui-Barr (Ngāi Tahu – Kāti Māhaki, Ngāti Porou), I could not help but feel inspired. Despite being only 17-years-old, she managed to beautifully articulate her musings about this world and her place within it as a young Ngāi Tahu wahine.

As I stumbled over each question, having been caught up in her previous answer, her ability to listen carefully and communicate her responses clearly showed maturity beyond her years.

Having competed annually throughout High School, this was her fifth and final shot. “I have competed in the Te Reo Māori section every year at regionals, so this was my first year competing in English and also my first year making it through to nationals.”

“It was pretty surprising. I really wasn’t expecting anything,” laughs Hinepounamu. “Making nationals was a big deal for me and I just wanted to deliver a really good speech having made it to the finals, so yeah, I was really shocked when it came to prizegiving.”

Hinepounamu’s impromptu speech topic was “Rangatahi voice can make an impact”, a topic perfectly suited to her and her passions. Watching her speak, you wouldn’t know that she had only been given the topic five minutes before walking on to the stage. Her eloquence could inspire any young person to start making a difference.

“I think the fact I struggled with [my Māoritanga] slightly was really good for me because it made me assert who I am and what I believe in. I am now really proud of my identity and who I am. I am able to be myself, my Māori self, in whatever environment I am put into.”

In her speech, Hinepounamu talked about the importance of rangatahi being politically aware. “At the age of 18 we have the right to vote, and it is so important that we exercise the right to do so. We have the worst voting turnout in all of New Zealand. If we actually represented ourselves in the polling booths, perhaps we could also represent in government.”

Hinepounamu’s own political interest saw her take up the opportunity to be a Youth MP earlier this year, working alongside Māori Party list member Marama Fox. “It was really awesome being able to see what she does each day. She is such a role model to me,” Hinepounamu says.

“I learnt a lot about what politicians actually do for our people, and it made me realise if more Māori got involved in politics, we could have a much bigger say in the legislation that is getting passed. I think there is a vast misconception that parliament is not a place for Māori, but it really should be and can be.”

Common misconceptions about Māori have at times meant Hinepounamu has struggled with self-identity. “I was confronted with identity issues when I first moved from a small Māori school in Porirua to a predominantly Pākehā mainstream college”, says Hinepounamu, “That was hard, and I think it probably has been the biggest transition in my life.”

However, this has not deterred her from being anything but proud of her Māoritanga. “I think the fact I struggled with it slightly was really good for me because it made me assert who I am and what I believe in. I am now really proud of my identity and who I am. I am able to be myself, my Māori self, in whatever environment I am put into.”

Being secure in her Māori identity is something that Hinepounamu believes is important. “Being a Māori leader at school, and strongly Māori, it kind of normalises it. I really want to show the Māori girls at my school that there are possibilities anywhere.”

The most important advice Hinepounamu says she could give to these young people is to stay connected with their whānau, their marae, and their iwi. “I think that that really carries any person through life, to have appreciation for who you are and where you came from.”

Hinepounamu’s connection with her Ngāi Tahu hau kāinga has at times been difficult, being based in the North Island. “I am from Kāti Māhaki on the West Coast. It is a really special place for me. It is a big trip though, so I sometimes struggle to get down there as much as I would like.” She has also been involved in other Ngāi Tahu opportunities while growing up, including Te Ara Whakatipu, Manawa Hou, and Kura Reo Kāi Tahu.

Next year Hinepounamu intends to move closer to her Ngāi Tahu whānau by relocating to Otago, to begin a Bachelor of Laws. From here she is unsure what she will do, but says that she wants to work in an area that is advocating and improving outcomes for Māori. “I don’t really know what that looks like yet to be honest, I haven’t worked that out, but I do know I want to help people and make some sort of difference.”