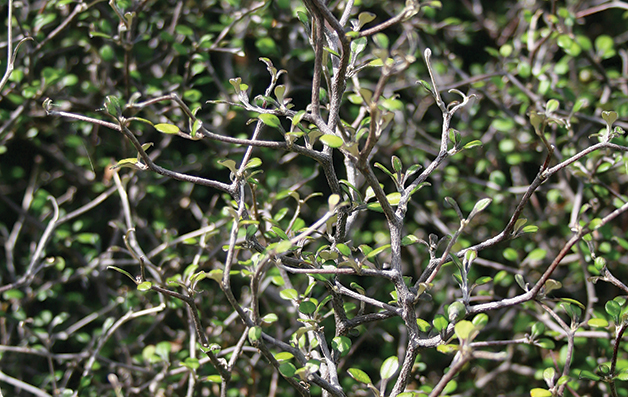 If ever there was a plant that defines “an impenetrable thicket” it must be korokio, appropriately known as the wire-netting bush.

Corokia cotoneaster is a tough evergreen shrub from the dogwood family that grows in lowland hills, lower mountain scrublands, river flats and rocky places throughout the country and outlying islands.

It actually prefers drier sites, and in Te Waipounamu is not found naturally west of the Southern Alps. It is almost impervious to gales or drought, cold temperatures, salt-laden sea air, and poor soils.

In sheltered places it can grow up to three metres in height, but on exposed sites it remains a tight compact bush with its distinctive zig-zag tangle of densely interlaced and tortured branch-lets.

It would be hard to find a bush better designed to snag an angler’s hook, and it can take an age to retrieve your gear, usually only by cutting it free.

The hardiness and dense foliage of korokio make it ideal for shelter or for clipping into a compact hedge as a deterrent to keep small domestic animals out of your garden.

Small silvery-grey leaves on black wiry stems are covered with a soft felt underneath. The shrub flowers profusely from October to January with bright yellow star-shaped flowers, and the red, orange, or yellow drupes ripen in late summer or autumn.

Ngāi Tahu used fine twigs of korokio as tinder when making a fire (hika or hinga), using a hardwood rubbing stick (kauati) of kaikōmako or tōtara in a grooved base (kaueti) such as the softwood māhoe.

When a spark was generated from this process it was fed with wisps of twigs of a dry flammable timber such as mikimiki (prickly mingimingi), korokio in scrubland, or tūmatakuru (matagouri) on open flats.

In Māori Healing and Herbal, Murdoch Riley records that several shrubs of the dogwood species have medicinal value as a tonic. The leaves of korokio were boiled and when cooled, the liquid was drunk as a treatment for stomach complaints and ulcers, which some sources said gave instant relief.