For the last six years the whānau of Te Rūnanga o Moeraki have been on a journey of cultural revitalisation and reconnection. Through a series of intensive wānanga they have been learning te reo as well as traditional waiata, customs, and stories that are unique to their takiwā.
Kaituhi Anna Brankin reports. 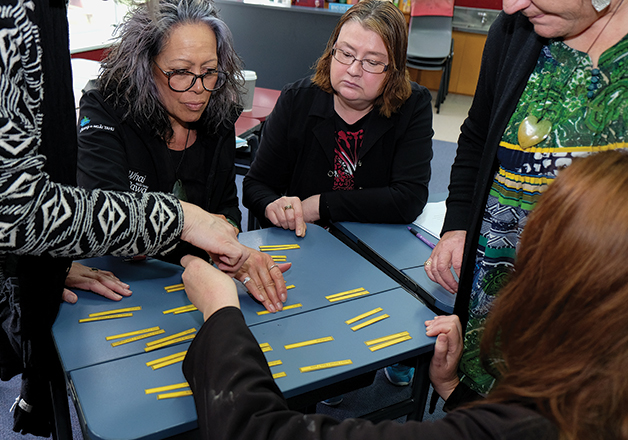 Above: Mary-Anne Tipa and Jennifer Brookes taking part in a learning activity.

The wānanga represent a revitalisation of their own, as they emulate the renowned wharekura Ōmanawharetapu that Matiaha Tiramōrehu held in Moeraki until 1868. Tiramōrehu, widely known as the father of the Ngāi Tahu Claim, was also a renowned scholar with extensive knowledge of Māori traditions and whakapapa. He sought to share this with others, and in his wharekura taught Ngāi Tahu tamariki the traditional knowledge and customs that had been handed down for generations.

Unfortunately, in a tale that is all too common throughout Aotearoa, Moeraki whānau lost a lot of this knowledge as colonisation and the pressure to participate in a settlers’ society overwhelmed them. As the years passed the wharekura of Tiramōrehu became a distant memory, as loss of land and financial hardship meant that whānau were forced to leave the takiwā in search of opportunities elsewhere. Over time, this led to a real sense of disconnect: with the land, the language, and the stories of the area. 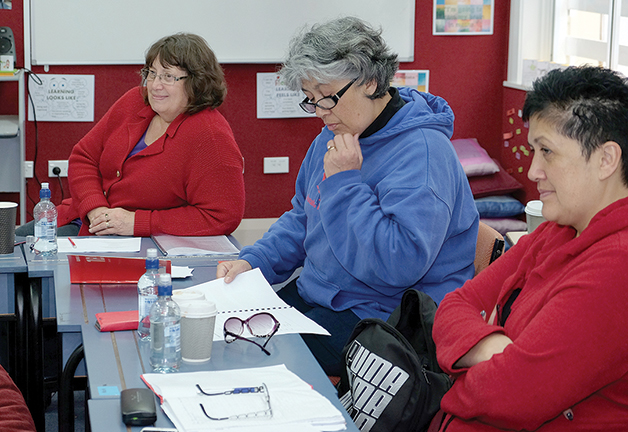 Moeraki kaumātua Joseph Tipa (Uncle Darkie) reflects on his childhood. “I was born here in the early 30s when it was quite tough. There were no shops, there was no money, and no jobs. You know what our supermarket was? The sea.” He never learnt te reo, and was told by “the three wise men” (the kaumātua of his time) that “if you want to get anywhere in this world, you must be educated. If you want to compete with the Pākehā you’ve got to go to school.” The desire to pursue better opportunities, as well as a social stigma towards traditional Māori practices and language, meant that Uncle Darkie’s generation were taught to prioritise adapting to Pākehā ways over their own culture.

While he grew up during this period of loss and disconnect in Moeraki, Uncle Darkie is pleased to see that the tide is beginning to turn with these wānanga, which were initiated by his own son and daughter-in-law. When Patrick and Nola Tipa made the decision to learn te reo six years ago, they wanted to do more than just learn the language. “We wanted to go home,” Nola says. “We saw it as an opportunity for us to come home and to bring others with us.” 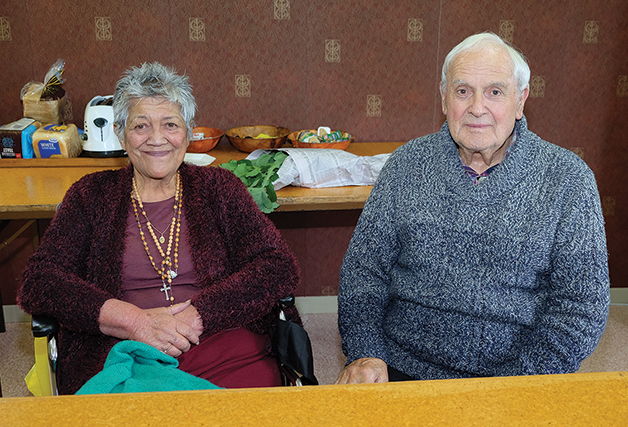 Above: Judy and Uncle Darkie Tipa.

Patrick and Nola approached the Christchurch Polytechnic Institute of Technology (now Ara) and Kotahi Mano Kāika (KMK), who were able to come up with a way to deliver content to Moeraki whānau in a series of block courses held at Moeraki Marae over several weekends throughout the year.

“We were coming home, we were learning the stories of our whakapapa and visiting our culturally significant sites. We wanted to share it with more of the whānau.”
Nola Tipa

The wānanga were even more successful than they had hoped for. “We realised it was growing into something that was more than just the reo,” says Nola. “We were coming home, we were learning the stories of our whakapapa and visiting our culturally significant sites. We wanted to share it with more of the whānau.”

Sarah-Jane Paki, Patrick’s younger sister and a regular attendee of the wānanga, came up with a way to make it more accessible for whānau. She had always wanted to attend kura reo, which are week-long immersion courses, but struggled to juggle this with her parenting responsibilities. “On most kura reo, children can only come if they’re fluent in the reo. That was the reason I suggested we start our own in Moeraki, so that my children can come, they can see mama learning, and it gives them an incentive to learn as well.” 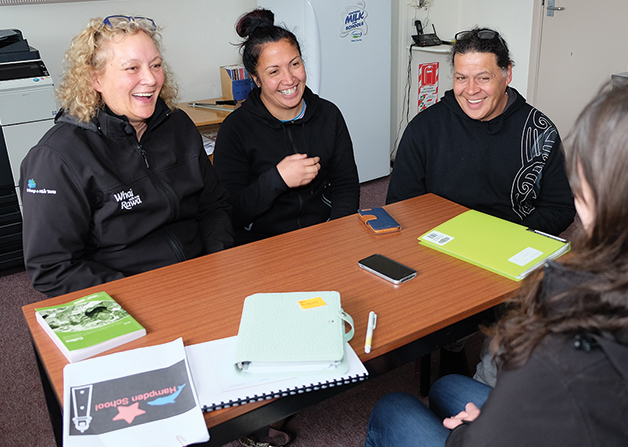 Above: Nola Tipa, Sarah-Jane Paki and Patrick Tipa laughing as they explain how the wānanga came about.

With the assistance of Te Pūtahitanga o Te Waipounamu and Ngāi Tahu Funds, the Moeraki kura reo was launched in 2015. Held in the September/October school holidays, whānau are encouraged to bring their tamariki for a week of learning and whanaungatanga. The correlation between this kura reo and the traditional wharekura of Moeraki is clear, and this inspired the name Te Kura o Te Tira Mōrehu Reo o Moeraki.

This year’s wānanga ran from 27th September to the 1 October, with nearly 70 whānau members. During the day the adults attended classes at nearby Hampden School, led by kaiako Hana O’Regan, Kare Tipa, and Fern Whitau.

This year was the first time that a class was offered for absolute beginners, which proved to be a popular choice. Ranui Ryan says, “I’ve been to other wānanga, and this is the best. It just feels like a family hui and it’s much more relaxed. I think it’s a more realistic programme because it caters to the absolute beginner.” Taone O’Regan agrees, saying “It’s nice to have the option to come in at beginners’ level. I feel supported to do it, it’s just fantastic.” Students who have felt intimidated by the prospect of attending classes in the past now say that Te Kura o Te Tira Mōrehu Reo o Moeraki is a safe learning environment where they can learn in the comfort of their papa kāika, with the encouragement and support of their whānau. 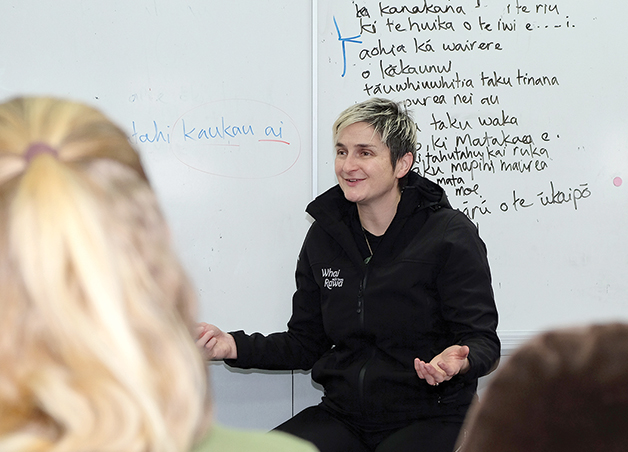 Above: Hana O’Regan leading the advanced class. Her commitment and tireless efforts in support of these wānanga have been a big part of their success.

For Allie Foot, who travels from Christchurch for the wānanga, this couldn’t be more true. “It means everything to be able to learn here. It’s actually quite emotional.” The opportunity to spend time at Moeraki as part of her te reo journey is of special significance to Allie. “My mum wasn’t allowed to speak Māori. She was one of those ones who was punished at school for it.” Allie never learned the language as a child, but her mother ensured that she had a strong connection to Moeraki and her whānau there. They would take the early bus from Ōamaru to the Hill Grove stop every weekend, and walk into the village of Moeraki from the highway. “We learned about the families and the trees and the birds on our walk in. We used to come here every weekend until Mum died in 1964.”

Allie has also been able to take advantage of the tamariki-friendly kura reo by bringing her mokopuna Josh to Moeraki for two years running, an opportunity that means a lot to her. Seeing him spending time on the marae connecting with his heritage and gaining confidence in his reo is extremely rewarding for her.

“We feel super fortunate that for our kids being at their marae most holidays is just the norm, it’s what they’ve always known. All the history of loss and heartache and the effort that has been put in to getting things back, they’re just oblivious. And that’s the ultimate result really, that it’s just totally normal for them.”
Jessie Moss

Young parents Mara Tipa Te Kahika and Jessie Moss have also drawn motivation from their tamariki, Kaahuia (six) and Irihāpeti (two). Mara spoke te reo as a child, but says, “I feel like I had a complete break between the age of about 16 until our first daughter was born.” The couple made a conscious decision to raise their kids with te reo as their first language, so opportunities to bring them back to Moeraki as part of this journey are greatly appreciated. With the support of KMK the couple have been able to access the Kāika Reo grant to make travelling down from Wellington possible, and are grateful that they are able to give this experience to their tamariki. 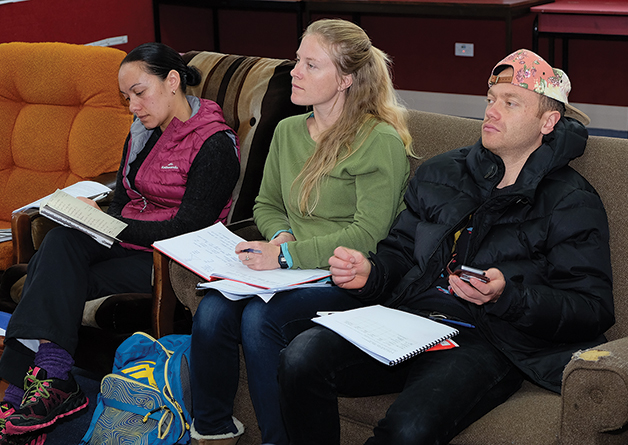 “We feel super fortunate that for our kids being at their marae most holidays is just the norm, it’s what they’ve always known,” Jessie says. “All the history of loss and heartache and the effort that has been put in to getting things back, they’re just oblivious. And that’s the ultimate result really, that it’s just totally normal for them.”

This year, while the adults attended their language classes the tamariki were occupied with a coding club, a new initiative run by Tracey Henderson of Coding Aotearoa. This gave them the opportunity to learn about their history in a different way, using stories shared by Moeraki upoko David Higgins to write code for a quiz about the marae. For Arabella Paki (eight), these stories were the highlight. “Uncle David was telling us a story about Aoraki and his brothers and the stairway to poutama. It was just such a cool story. Today we’re going to go for a walk and he will tell us another story.” 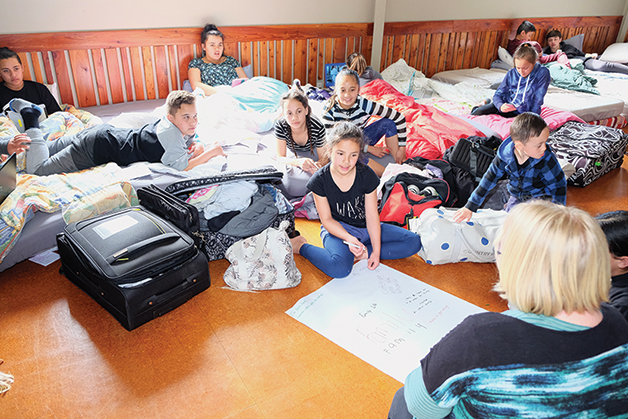 Above: Tamariki brainstorming ideas for the coding club in the wharenui.

Most of the tamariki had never done anything like this before, and enjoyed the challenge. Te Rautawhiri Mamaru-O’Regan (12) is one of them.

“This is the first time I’ve done code – it’s a really exciting experience. We’re making a little skit on the computer about how great our marae is.”

Some of the older children have been accompanying their parents since the first wānanga, and throughout this time have acted as kaiāwhina, taking on more responsibility at the marae while their parents attend classes. This year their efforts were rewarded, and they were presented with cultural awards, unique pounamu badges carved by Gavin Thompson that they can wear on their school blazers, in celebration of their leadership in te reo and manaakitanga on the marae.

This year was also the inaugural presentation of a whānau reo award that recognises commitment to reo. This was awarded to Sarah-Jane in recognition of her effort to revitalise te reo for her whānau. The presentation of these awards add a special touch to the kura reo, as they celebrate progress and above all the commitment that each student has made to attend. 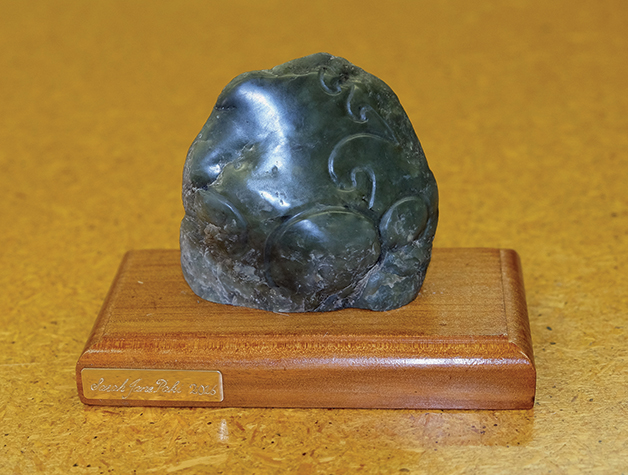 Above: The whānau reo award, presented this year to Sarah-Jane Paki.

Whānau have travelled from as far south as Awarua and as far north as Palmerston North to attend these wānanga, but all say the effort was worth it. A profound gratitude for the opportunity to engage with stories and places unique to Moeraki is universal. James Buchanan in particular has appreciated the chance to revisit his roots while taking a break from his studies in London. “Moeraki is really special – it’s got that kind of feeling that I don’t experience in many other places.”

For James, these wānanga represent a turning point in the story of Moeraki, as the whānau begin to reclaim their heritage after years of loss. For him, the comparison to the wharekura of Matiaha Tiramōrehu could not be more apt.

“It’s really special that Moeraki has that history so accessible. It is very special to be coming to something called the Tira Mōrehu wānanga, harkening back to that original wharekura.

“There’s a real poignancy when you think about the literal meaning of tira mōrehu – a group of survivors. We are the survivors of those who were here before, his pupils and his friends, and we have that very important job before us to uphold the legacy he represents.”