Ngāi Tahu has a strong artistic tradition, stretching from traditional rock art and carving to contemporary practices of sculpture and painting, and Te Rūnanga o Ngāi Tahu is celebrating this in the upcoming web series, Ngā Ringa Toi o Tahu. This eight-part series, created with funding from Te Māngai Pāho, will highlight the lives and practices of prominent Ngāi Tahu artists. Filming is underway and the series is scheduled to be completed mid-2017. 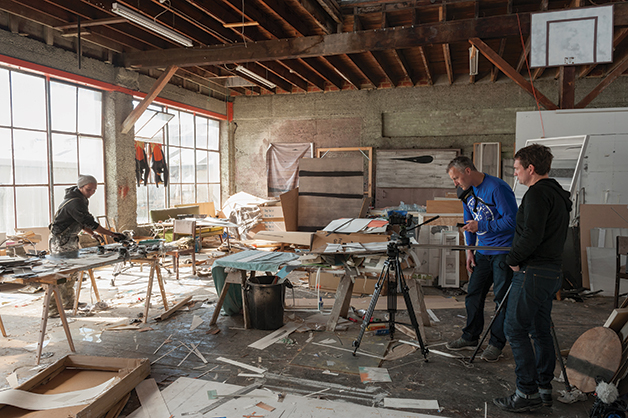 Above: Simon Kaan at work in his studio with director of photography Richard Sutcliffe and series director Simon Leslie.

Ngā Ringa Toi o Tahu follows on the heels of Ngāi Tahu Mahinga Kai, a twelve-part web series that showcased the traditional food gathering practices of the iwi. Released in September 2015, this series generated an extremely positive response and in November 2016 it was awarded Best Web Show at the New Zealand Web Fest Awards.

This national accolade suggests that great things can be expected from Ngā Ringa Toi o Tahu, which was also awarded Best Pilot or Trailer at the same event. The web series is an opportunity to give recognition to a number of prominent Ngāi Tahu artists and discuss how their work contributes to an ever-developing Ngāi Tahu aesthetic.

“Ngā Ringa Toi o Tahu not only celebrates the work of Ngāi Tahu artists and looks at what a Ngāi Tahu art aesthetic is – it also gives recognition to people for the work they’re doing on the ground to encapsulate the sense of what it is to be Ngāi Tahu in a solid form for future generations to look back on.”

The artists featured in Ngā Ringa Toi o Tahu are Simon Kaan, Fayne Robinson, Areta Wilkinson, Priscilla Cowie, Lonnie Hutchinson, Fiona Pardington, Nathan Pohio, Reihana Parata and Morehu Flutey-Henare, and Ross Hemera. Their crafts range from traditional practices such as weaving and carving, to contemporary fields such as photography and multimedia installation. The common thread running through all of their work is a profound connection to their Ngāi Tahu whakapapa, and the desire to contribute to the development of iwi visual arts.

For many of these artists, inspiration comes from traditional stories of our tīpuna. With this in mind, Dr Te Maire Tau and others researched and wrote Grand Narratives, a comprehensive history of Ngāi Tahu in Canterbury. These narratives have acted as a starting point for many of the works incorporated into the Christchurch rebuild, as artists strive to use symbols and stories to express our unique identity throughout the city. Te Maire, who is the director of the Ngāi Tahu Research Centre at the University of Canterbury, says the secret to a Ngāi Tahu aesthetic is simple. “I’ve always said we need to design around our values,” he says. “You can only design for what you are, and we are our values.” 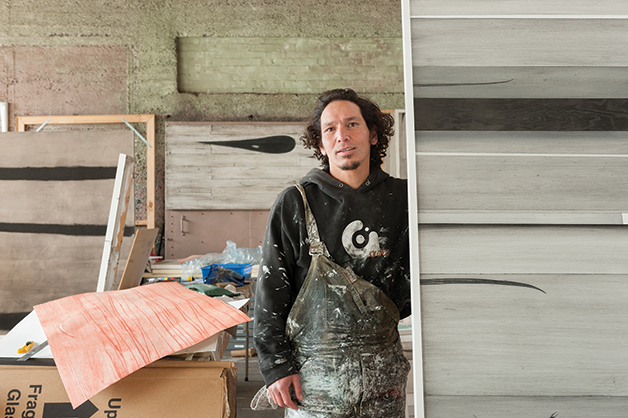 Dunedin artist Simon Kaan agrees, saying that his sense of what it is to be Ngāi Tahu is rooted in the example of manaakitanga and whanaungatanga demonstrated by his pōua, George Simon. He has continued to explore his Ngāi Tahutanga throughout his work, and says he has gained a greater understanding of it in the process. Simon was the first artist to be interviewed for Ngā Ringa Toi o Tahu, and feels extremely privileged to be part of the kaupapa. “I would love for this web series to raise awareness of and increase engagement with Ngāi Tahu visual arts. Art isn’t created in a vacuum, and we need engagement from the iwi to be sure that what we’re doing is even relevant.”

The web series offers an alternative insight into Ngāi Tahu visual arts, enabling the viewers to hear directly from the artists about their influences and creation processes. For Simon, this is a welcome change from the status quo of gallery showings, which restrict viewers from actually engaging with the artists. He believes that this relationship between artist and viewer is crucial to an understanding of the work. “Historically, artists were revered as tohunga,” he says. “They were our historians, they were the source of knowledge and culture. Ngāi Tahu visual arts are just as important as the reo, they’re a part of our culture that we need to protect and develop.”

When asked what makes Ngāi Tahu visual arts unique, Simon says it is the symbols and underlying philosophies. “We’re a migratory people and that comes through in the aesthetic, as well as the connection to the land and the sea,” he explains. He refers to the Ngāi Tahu creation story, which states that Papatūānuku, the earth mother, was married to Tangaroa, god of the sea, before she married Ranginui, the sky father. “That brings in our connection to the sea, which I really love. I spend a lot of time in the water; I love the rhythms, and that influences my work.”

Above all, Simon is excited by the opportunity Ngā Ringa Toi o Tahu provides to explore the Ngāi Tahu aesthetic, which is something he thinks about on a daily basis as part of his work. The web series seeks to uncover what a Ngāi Tahu aesthetic is, but according to Simon, there is no right answer. “What’s important is that we are continuing to develop, and not just recycling what has been done already. We need to engage with our philosophies and draw on the past to create something new.”

In a way, Ngā Ringa Toi o Tahu does exactly that. The web series draws on a long history of storytelling within Ngāi Tahu culture, using modern technology to share our stories with a widespread, contemporary audience. And as Simon hopes, the highly anticipated series will offer Ngāi Tahu whānui around the world the ability to participate in the ongoing development of our visual culture. “I think there’s a really exciting potential there, to engage, to enrich the culture, to inspire. We need collaboration with whānau, with rūnaka, with the iwi.”