From traditional voyaging to contemporary racing, from a means of transport to the fastest growing water sport in the country, kaituhi Anna Brankin meets two wāhine embracing the resurgence of waka in Aotearoa. 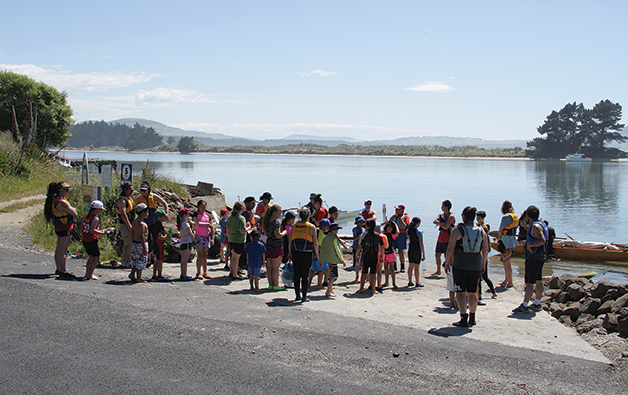 Above: Whānau and friends of Hauteruruku ki Puketeraki Waka Club gather at Waikouaiti.

Waka play an integral part in our migratory history, as the means by which our tīpuna voyaged here from the ancestral homeland of Hawaiki. They are woven throughout our mythology, with Ngāi Tahu stories asserting that Te Waipounamu itself is the waka of Aoraki, our tipuna mauka, capsized in the ocean with he and his brothers turned to stone along its back as the principal mountains of the Southern Alps.

The historic significance of waka is strong, so it is fitting that in recent years the popularity of waka has reignited. Paddlers around the country have been turning a traditional mode of transport into a popular water sport.

I spoke to waka enthusiasts Suzi Flack of Kāti Huirapa Rūnaka ki Puketeraki and Karina Davis-Marsden from Ōraka Aparima about the waka initiatives that are taking place within their respective takiwā.

Suzi’s waka journey began six years ago when her husband Brendan got hold of native timber and decided to build a single-hulled waka using instructions he’d found in a book. The couple had never paddled before, so when Suzi saw that the Dunedin waka ama club Fire in Ice were hosting an open day, she decided to go along with her daughters. “We got hooked,” said Suzi. “We’d go into town twice a week, learned how to paddle a waka, learned all our skills. Meantime, Brendan was still under the house toiling away every night carving his waka.”

As the waka neared completion, interest in the project grew and in 2011 Hauteruruku ki Puketeraki Waka Club was formed. And, as Suzi says, it just snowballed from there. “We somehow caught the attention of HEHA, an organisation funded through the Ministry of Health – Healthy Eating, Healthy Action. They loved what we were doing and asked if they could fund a second hull for us.”

Promoting this philosophy was easy because from the outset, the waka club was about getting whānau together and active. “It wasn’t just about getting on the water and racing,” says Suzi. “Our whānau fitness increased, people gave up smoking, and we just embraced the lifestyle of being healthy around waka. There was a seat on the waka for everybody. Our kaumātua could paddle, our little pēpi could sit in the waka, and our youngsters could learn how to paddle.”

This sense of inclusiveness is one of the reasons that Karina believes waka has been so successful for Ōraka Aparima as well. “I like that it’s a cool sport for all ages. If you really want to go for it and compete, that’s great, but if you just want to enjoy it you can do that as well.

“In summer we have the waka out at the marae, and I love that we can drive it down the road and some whānau sticks their head out of the gate and says ‘oh yeah, let’s go for a paddle!’” she laughs.

Above: Ōraka Aparima waka ama crew competing at the 2015 Icebreaker competition
in Dunedin.

Waka came to Ōraka Aparima by way of Karina’s nephew, Kayne Davis. He learned to paddle while studying in Christchurch and quickly realised that it would be an awesome rūnaka initiative. He presented his case to the executive, and as Karina says, “it was just one of those days where everyone agreed. We were pretty lucky that they had the foresight to think outside the box and let us go ahead. It was a new initiative that got us moving and got us out on the water.”

In return, the crew have been able to increase awareness of Ōraka Aparima over the seven years they’ve been paddling. “We have the capacity to let people know who we are,” says Karina. “Because we’re on the water, we’re quite visual and people ask about us. So we can tell them where we’re from, what we do, and what we’re about. It’s good for the rūnaka to have us out there.”

They were the first crew to start paddling on the Ōreti River just outside Invercargill, but as the popularity of the sport has increased, four new clubs have started up. The Ōraka Aparima crew see this as an opportunity to expand the sport in the deep south, and to foster some friendly competition.

“It’s a small area down here so we have to support each other,” says Karina. “Last year we ran our own 5km and 10km races, just for the little clubs. We thought if we can do this together and we still like each other, then maybe we can do something else. And we still liked each other!”

For both clubs, the concept of traditional voyaging and the chance to walk (or paddle) in the footsteps of their tipuna is the ultimate goal. With that in mind, earlier this year each club underwent their own unique journey. On Waitangi weekend, the core members of Hauteruruku ki Puketeraki travelled to Lake Pūkaki to paddle its length towards the base of their tīpuna mauka, Aoraki. “It was a very cool trip for our club,” says Suzi. “We give a lot to other people, so what was really lovely about this haerenga was that it gave to ourselves – it gave us the chance to grow a bit more.” 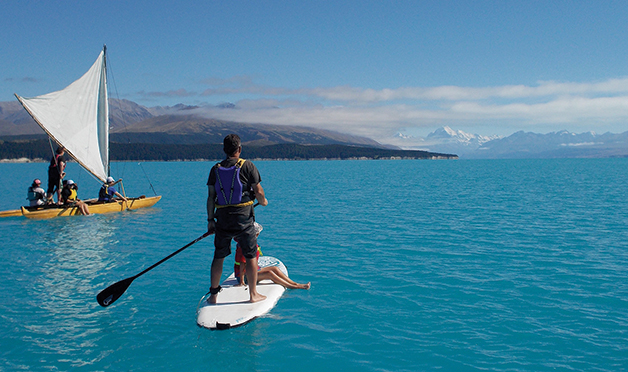 Above: Members of Hauteruruku ki Puketeraki on their haerenga to Lake Pukaki, paddling towards Aoraki.

The Ōraka Aparima crew’s haerenga came by way of rūnaka member Nic Low, who travelled from Piopiotahi (Milford Sound) to the Ōraka Aparima marae, Takutai o te Tītī, via the trails of his ancestors. Most of his journey was on foot, but he asked the crew if they would paddle across Lakes Te Anau and Manapouri with him, and they leapt at the chance. “It was absolutely incredible,” says Karina. “It gave me an understanding of what our tīpuna felt when they were out there on the water, understanding the natural elements – the same ones we deal with today.”

For both crews, it is this sense of connection that makes waka so meaningful: connection to one another, to the environment, and to their tīpuna. Hopefully, as the sport increases in popularity, more whānau will have the opportunity to paddle and to experience that unique connection. Because, as Suzi says, “there’s nothing like sitting on Takaroa, flying through the water in the wind, in the rain, in the sun. You’re all working together, your hearts are all beating at the same time, you’re in time with each other, and you’re in time with your world.”