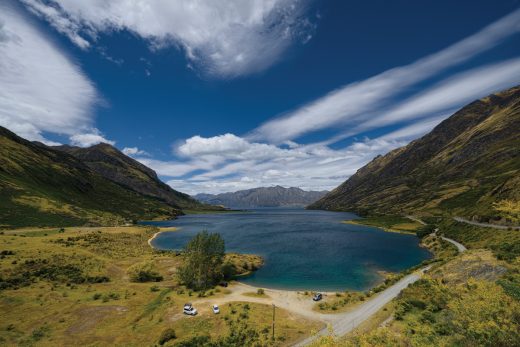 Manuhaea was traditionally a kāinga mahinga kai (food-gathering settlement) and kāinga nohoanga (settlement) on the eastern side of “the Neck” – the narrow isthmus of land separating lakes Hāwea and Wānaka. It was renowned as a small lagoon where tuna gathered. Manuhaea was also the site of a whare wānanga (traditional place of learning). The Ngāti Tama leader Te Pūoho and his travelling party attacked Manuhaea during their 1836 southern raid on Ngāi Tahu, and the inhabitants escaped over Ōmakō (Lindis Pass) and down the Waitaki River. One of the people to escape was Rāwiri Te Maire, who was to become an invaluable source of information on the Ngāi Tahu history of the interior of Te Waipounamu. In 1868, a 100-hectare fishery easement was allocated at Manuhaea abutting the lagoon, due to its significance as a food-gathering area. However, the lagoon and part of the fishery easement were drowned when Lake Hāwea was artificially raised to store water for hydroelectric power generation in 1958.
Photograph: Tony Bridge