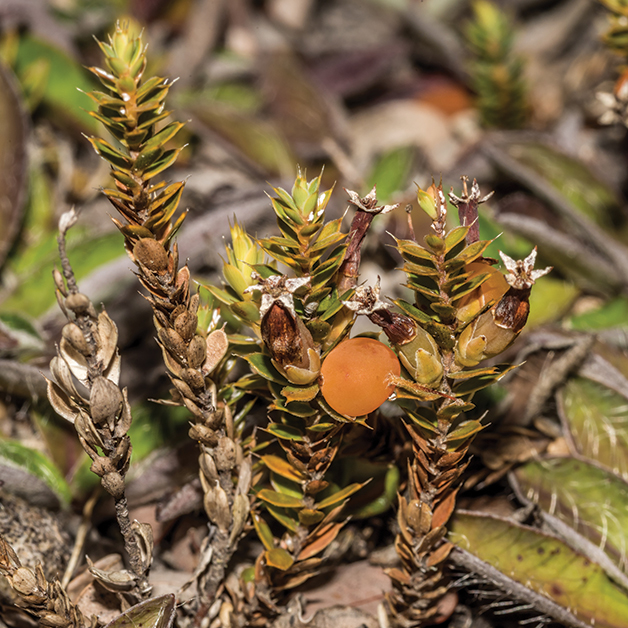 There are not that many native New Zealand plants that produce a sweet and tasty fruit that you can pick and eat straight off the plant.

Pātōtara, a prickly low-growing shrub, is one of the few. Its juicy yellow/orange berries that ripen in summer and early autumn were once a popular sweet treat for Māori and Pākehā children, in the days before they could buy confectionery from the corner dairy.

This hardy, heath-like shrub is common in dryland sites at all altitudes throughout Aotearoa, ranging from coastal sand dunes at sea level to rocky outcrops, low tussock grasslands, and sub-alpine herb fields up to 1600 metres.

The plant spreads laterally, often forming quite dense stands of upright stems up to about 15 cm tall. The leaves are close-set, 4–9 mm long by 1–2 mm wide, with a hard texture and a tip that narrows to a fine sharp point that can be prickly to touch.

Pātōtara has a long flowering season from September to January, with flowers and fruits appearing on the plant at the same time and fruits ripening from February through to April.

The white tubular flowers are about 1 cm long, with five distinctly bearded lobes at the mouth of the tubes. They are very fragrant, with a strong honey-scented aroma.

According to some sources, when the plant was more plentiful, the fragrance of its profuse flowering filled whole alpine valleys. With an offshore wind, apparently its fragrance was perceptible to mariners at sea, even before land was within sight.

Pātōtara berries are a bright orange/yellow colour when they ripen, the size of currants, and taste like apricots.

In Traditional Lifeways of the Southern Māori, Herries Beattie’s informants told him the kiore (native rat), bush weka, and reputedly even the koreke (extinct native quail) relied on a diet of berries from native plants, including pātōtara.

This plant also features in a number of recipes for traditional Māori perfumes and scents, including the most famous of them, “the grand Māori perfume.”

This recipe required the aromatic ferns mokimoki and piripiri, resin from tarata (lemonwood) and taramea (speargrass), kōpuru (scented moss), kāretu (scented grass), the roots of pātōtara, and a few other obscure ingredients that were combined with pork fat.

A similar list of aromatic plants was used to make an oil to anoint the corpse of deceased persons before burial. In this recipe the root of the pātōtara was carefully scraped and smelt like cloves, according to one source in Murdoch Riley’s Māori Healing and Herbal.

Another of Riley’s sources recorded that the flower and roots of pātōtara were used in a compound to make another well-known scent from taramea.