Jeanine Tamati-Elliffe (Kāi Te Ruahikihiki, Kāi Te Pahi, Te Ātiawa and Ngāti Mutunga) wanted te reo for her kids. So she had to learn it one step ahead of them. Kaituhi Aaron Smale spoke to her about her whānau journey. 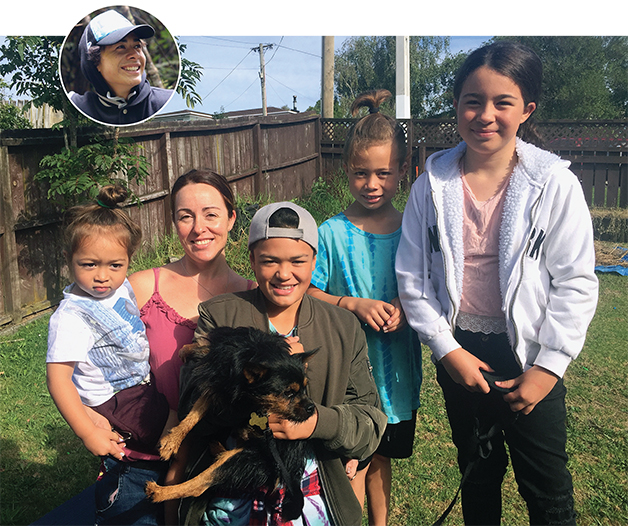 Jeanine laughs with a mix of pride and embarrassment as she talks about her teenage son pulling her up on her grammar.

“I was corrected by Kiliona the other day, it was rather humiliating. I was trying to correct my eight-year-old daughter on something she had said. Most of the time I’m just exhausted, tired, so busy, just trying to do what you do every day to even think about how correct my grammar is.”

Her 14-year-old son asked her to repeat what she’d said and then pointed out she was incorrect.

“But actually he was right. Dammit. They now have the role of teaching me.”

She admits it was only a matter of time before he and her other four children would be outstripping her. After all, they’ve grown up as first language speakers, despite Jeanine herself being only a couple of steps ahead of them when they were learning to talk. Although she’d learnt smatterings of te reo growing up in Dunedin, she knew when she started having kids that she wanted more than that for them.

“My son Kiliona was my first little guinea pig. He was the one I could try things out on when there was no-one around to judge me or to even correct me. It was so foreign really. Singing in the reo was one thing, but speaking it requires a different depth of knowledge – it’s a different part of your psyche that you have to tap into to be able to use and maintain it. Part of that is owning it and saying, ‘Actually this belongs to me. I need not be so ashamed of being a learner, or being ashamed of not knowing it.’ That in itself is a massive hurdle. It took me a few kids to work that out.”

As their primary language teacher in the home, she was swotting furiously to stay ahead of them. She moved to Auckland, partly because of the language opportunities it offered. But by the time her third child was born, her daughter Hana-Amaia, she had made the decision to speak to her exclusively in Māori.

“The way I always looked at it, a child’s language development is slow enough that by the age of two they will only be speaking in two or three-word sentences – it’s a slow incremental increase in language ability, which meant my job was to stay one step ahead of them. If they were at three words, then I needed to be able to use sentences with at least five words.”

Keeping ahead of her kids then stepped up a gear when they began going to school. Enrolling them in a mainstream school with an immersion unit also meant there was a struggle to figure out what her language philosophy was, and whether it was being catered for. The language unit she enrolled her older children in was good, but attending a mainstream school meant having to compromise the way in which her children were immersed.

“After five or six years in a Māori unit, I was actually exhausted with the number of battles we had had to endure as a reo-speaking whānau. The hardest thing was actually the exposure our kids were getting to English from the non-reo speaking teachers, kids, and whānau of the school. While it was absolutely fine for a lot of the other whānau at the school, it just didn’t fit with our ideal model for immersion. I just wanted the reo to be normalised for my kids, like it is at home – in all aspects of their education.”

The other challenge was the complacency of other whānau with reo who varied in their commitment to the language with their tamariki.

“It is always a challenge for people learning te reo Māori as a second language to truly own the reo in a normal and natural way – it takes time. But for me, as someone who had made that commitment wholeheartedly to raise a new generation of reo speakers, I began questioning whether being immersed in an environment where tamariki have reo only as a kura language was right for us as a whānau.

“Which is why I thought Kura Kaupapa was definitely worth a go, and it was the best move we’ve made so far. Over the past three years Te Aho Matua has provided connection. The reo is valued greatly and normalised not just for our reo speaking kids, but their whānau too.
I haven’t had to compromise any of my own values by moving to Kura Kaupapa Māori, in the way I had to as part of the mainstream system. I’ve found for my tamariki an education that mirrors the values of our whānau.”

She had never been concerned about them not learning English, as they are surrounded by it and have picked it up easily.

“My tamariki have always had a natural interest in languages as a result of being bilingual. They have taught themselves how to read English and have been attending weekly out of school tuition classes with the support of Te Rūnanga o Ngāi Tahu.

“I personally haven’t really put major emphasis on their needing to know English. It’s just happened naturally and they know they’re pretty clever because they can speak both languages, fluently and easily.”

She also rejects the idea that a Māori immersion education could be a barrier to tertiary study in sciences and technical subjects like medicine and law.

“It’s my generation and older that still have trouble trusting or seeing the value of learning through Kura Kaupapa Māori. Many still believe Māori immersion may be a hindrance to succeeding in the traditionally preferred, predominantly Pākehā universities. We still haven’t dealt with the historical trauma of having our language being taken from us, which makes it easier to buy into this idea. But I’ve seen its successes and have faith that Te Aho Matua as a foundation which harnesses the strengths of our tamariki, is creating a new generation of first language speakers who will be confident and capable future navigators, healers, educators, craftspeople, and strategists. We have the past few decades of Kura Kaupapa Māori graduates who have become today’s change-makers and leaders.”

She points to her cousin Dr Lily Fraser (nō Puketeraki), a reo-speaking General Practitioner who graduated from Te Wharekura o Hoani Waititi and then went on to study at Otago Medical School.

“She was the first graduate from Hoani Waititi to receive a medical degree, and is an example to my tamariki and other kura kids that you can aspire to become a doctor, a lawyer, or whatever you want to be.”

She hopes to get back down to Te Waipounamu one day soon to reestablish herself there, and add to the growth of Kāi Tahu speakers of te reo living in the iwi takiwā.

While she felt slightly chided by her teenage son correcting her, she’s actually chuffed.

“His knowledge base and his articulation in the reo is far better, far greater than mine, because it’s part of who he is. As a māmā it’s really awesome when you see that. You know you’ve nailed it.”