In this issue we take the opportunity to acknowledge Tā Mark Solomon on his 18 years as Kaiwhakahaere o Te Rūnanga o Ngāi Tahu (pages 10 – 15). We reflect upon his contribution to Ngāi Tahu, to Māoridom, and in fact to the whole of Aotearoa. Over the last 18 years he has been a constant presence, playing an instrumental role as Te Rūnanga o Ngāi Tahu found its feet post-Settlement, forming strategic relationships with the Crown and other iwi, and guiding Ngāi Tahu through difficult times, such as the Christchurch earthquakes. The years he has dedicated to the iwi, and the affably humble way he has always carried himself, mean he will be missed by many.

On pages 30 – 33 we discuss the issue of whenua in Tūrangawaewae – Where Do We Stand? Tūrangawaewae means “a place to stand”, and this article highlights the fact that as an iwi Ngāi Tahu needs to take a clear direction on tūrangawaewae and the concept of land ownership. When Te Kerēme (the Ngāi Tahu Claim) was settled, the intention was to restore mana whenua and kaitiakitanga in Te Waipounamu, but in recent years there seems to have been a more commercial focus. Is there a way to honour the aspirations of Ngāi Tahu tīpuna by increasing the tribal footprint, while still allowing the wealth of the iwi to grow?

Te Whaka a Te Wera at Paterson Inlet, the largest mātaitai (customary fishing reserve) in the country, is a fine exemplar of kaitiakitanga. Fifth-generation Rakiura resident Phillip Smith talks to Rob Tipa about its importance, and the responsibility to ensure sustainable use of our natural resources.

Twenty years since the Ngāi Tahu Deed of Settlement was signed, it is important that the iwi remember why Te Kerēme was fought, and ensure that their actions and decisions continue to build a legacy that Ngāi Tahu tīpuna would be proud of. 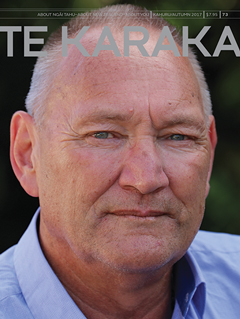