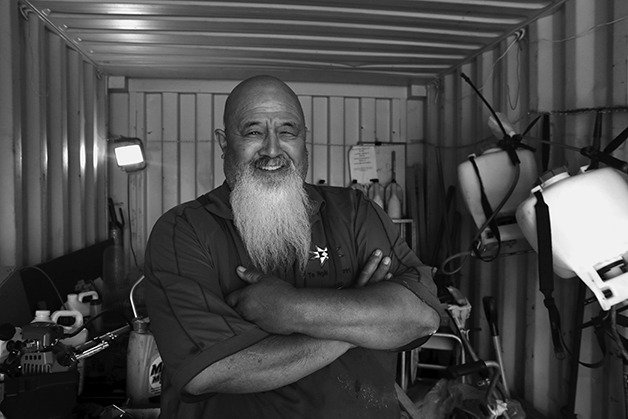 Rex Anglem loves getting out of bed and going to work.

“I don’t know what I’ll do when I retire. To be honest I’ll retire when I’ve got a wooden suit on me,” he says with a chuckle.

Rex (Ngāi Tahu) works at Tuahiwi Marae three days a week as the groundsperson, mowing lawns, tending the gardens, and helping to keep the modern new facility looking spick and span. He also looks after the nearby village church and whānau cemetery.

As well as this, Rex spends two days a week at the Tūhaitara Trust doing what he describes as labouring, “brush-cutting, planting, watering, and range-running”, monitoring the public track that runs the length of Tūtaepatu Lagoon between Woodend and Pegasus.

Rex’s 34 years of curing beef hides for Belfast-based Colliers Watson was brought to a premature end after the Christchurch earthquakes forced the closure of the factory. However, fortune smiled on him, and he found work at the Tūhaitara Trust followed soon by his mahi at the marae.

“I can’t stand being inside – I couldn’t be behind a desk,” he says. “I love it here. To be honest, it doesn’t feel like work.”

Rex’s father William Te Hau Tapanui passed away more than 20 years ago. His mother Patricia (Aunty Pat) Anglem, who turns 95 this year, is a regular visitor to the marae. Rarely is there a day she doesn’t make the short scooter trip from her neighbouring property to ensure everything is as it should be.

Born in Temuka and raised in Tuahiwi, Rex has been married to Margaret for 47 years. “We met at a party, had a few drinks, and that was it really.”