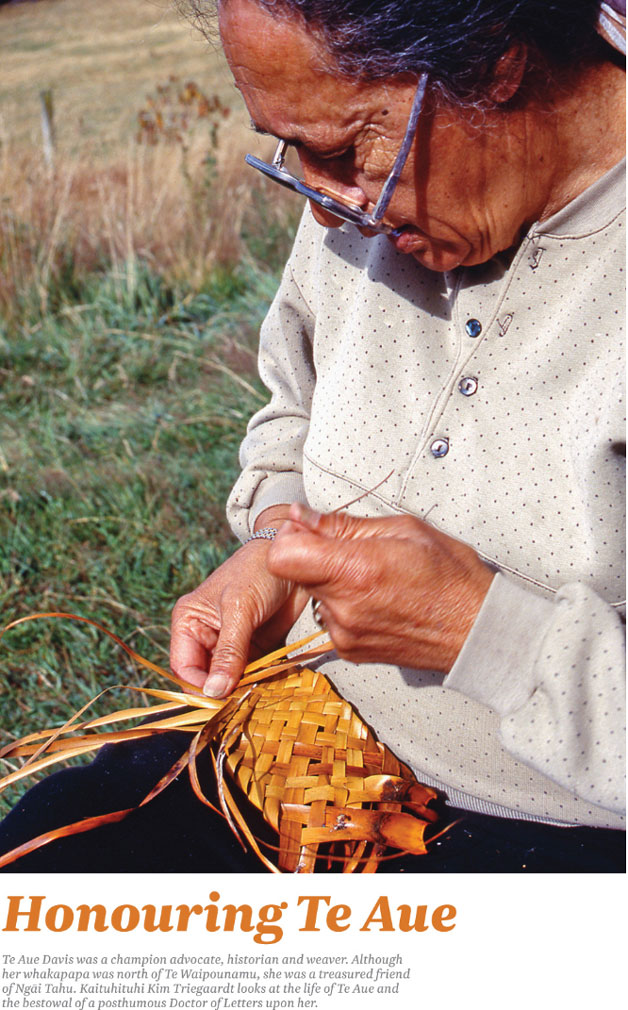 “So what are YOU going to do about that?” It is a simple sentence and it used to freeze former Minister of Māori Affairs Koro Tainui Wētere in his tracks. Tā Tipene O’Regan (Ngāi Tahu) laughs as he remembers weaver and historian Te Aue Davis remonstrating with her cousin for some breach of Māori tradition.

Te Aue (Daisy) Davis was many things to many people – historian, master weaver, heritage champion, tāua and mother. She was a welcome and beloved friend of the Kāi Tahu people, says Tā Tipene.

“When we were looking to translate documents into good quality Māori for legislation, including the translation of the Crown Apology in 1998, she was the one we called on. She was responsible for translating a huge amount of documentation around the settlement,” says Tā Tipene. 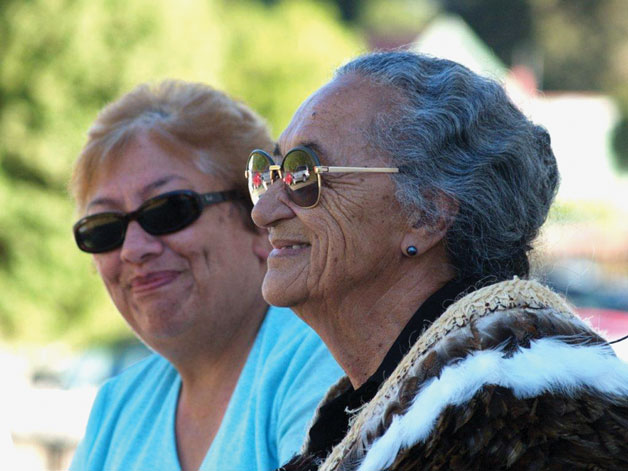 Te Aue was affiliated to Ngāti Uekaha and Ngāti Maniapoto, and knew the manuscripts of her father John Davis and his older brother Edward virtually by heart. This love of literature saw her engaged by the New Zealand Geographic Board in the mid 1980s as a researcher and editor of three publications planned for New Zealand’s 150th anniversary celebrations in 1990.

She produced the first handbook of Māori place names and their origins and derivations, a Māori Oral History Atlas and a pair of Māori Place Names maps in Te Reo Māori. The handbook Ngā Tohu Pumahara: The Survey Pegs of the Past is still in print.

Tā Tipene remembers vividly Te Aue’s response when he phoned to ask if she would accept an Honorary Degree of Doctor of Letters from the University of Canterbury.

“Upokokohua koe! — I should boil your head,” she told him.

“But she was pleased,” he says. “Although she did tell me to hurry up because she didn’t have long left.” 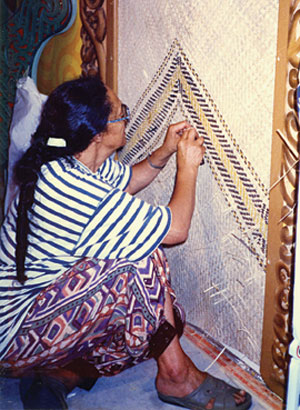 Working on a whāriki at Takahanga Marae 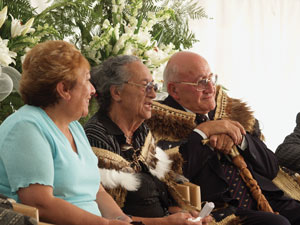 Sadly the 85-year old Te Aue fell victim to cancer faster than even she had anticipated. She passed away on November 28, 2010, before she could accept the honorary degree.

Last December, the doctorate was awarded posthumously to her family at Takahanga Marae, Kaikōura. It was a significant place because Te Aue had helped redevelop the Takahanga wharenui, Maru Kaiteatea, for Ngāti Kurī hapū in the 1980s.

“She really was quite an extraordinary woman and a treasured friend of Ngāi Tahu,” says Tā Tipene. “She has left behind a cultural and scholarly legacy for a huge number of Māori people whose lives she touched throughout New Zealand.”

Tā Tipene first met Te Aue in the early 1970s in Gisborne during hui around the Draft Māori Affairs Bill revision. She was always there with her friend Naida Glavish (Ngāti Whatua) supporting their northern kaumātua with advice and care.

“She had a huge competence in history, Māori traditions, botanical knowledge, natural resources and other things in which we shared an interest. She was a major source of traditional information and later we would spend long evenings in Auckland with Hori Forbes (then chairman of the Tainui Māori Trust Board) talking until long in the night about everything, especially Te Ao Māori,” says Tā Tipene, remembering evenings filled with robust debate, challenging questions and lots of laughter.

As the conversation turned to legislative affairs and the wider field of Māori/Crown relationships, Te Aue would make known her ideas with the confidence born of a natural scholar.

“She was never intimidated by academic or bureaucratic arrogance,” says Tā Tipene. “She was spectacularly bilingual. Her command of English was as profound as her command of Te Reo Māori.”

Te Aue was a confidante of some of the great Māori intellects of the time – John Rangihau of Ngāi Tūhoe, Pei Te Hurunui Jones of Tainui, Sir James Henare of Ngāti Hine and Māori Marsden of Te Tai Tokerau to name just a few. “These were formidable bi-cultural and bi-lingual intellects but they dealt with Te Aue as an equal. She treated them with deference but never, ever, failed to stand her ground.”

Tā Tipene says he became something of a “mobile library” delivering books to his friend. He began calling on her translation skills more and more. 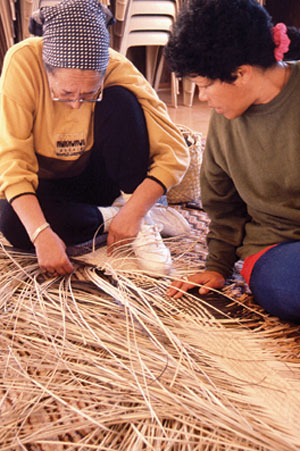 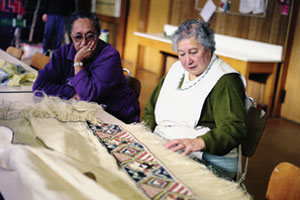 With the late Bessie Hildebrand.

“She would check my translations and verify them. The more she worked on our manuscript documents, the more interested she became in them.”

When Te Aue began to visit Te Waipounamu, generally to Kaikōura and Oaro, more frequently, Tā Tipene says she would sit with him and Bill Solomon, talking, disagreeing and arguing about all sorts of things. “It was always about questions and issues though, and we’d invariably end up on the manuscripts and their content.”

“We worked at a time when important policies were being developed particularly around Māori heritage and archaeological sites. She was staunch about maintaining the proper respect for ancestral approaches and traditional ways of managing relationships.”

The way certain materials or taonga are handled, the approach to tapu and the things that only men or women could do – these were all ancient traditions she fought for in her own indomitable, forthright way.

“She could be quite outspoken at times,” says Cliff. “But she knew what was right and even Dame Te Atairangikaahu would confide in her on matters to do with protocol.”

“We now have our own younger scholars emerging in that area, but Te Aue was there for us at a time when we had a huge need and matched with a huge shortage of scholarly competence. She played a key role in the re-assembly of Ngāi Tahu cultural content.”

Alongside her passion for words ran a similar affection for arts and crafts, particularly weaving.

The status of Te Aue as a fine weaver grew steadily over the years. She visited Government House several times to restore and repair some of the kākahu and taonga.

“She also began progressively doing a lot of conservation work in association with Te Papa and became widely known as an advocate for the conservation and management of Māori heritage treasures both at home and overseas,” says Tā Tipene. Te Aue produced a number of notable kākahu, including one for the New Zealand Olympic team and in 1986 became the first recipient of the Te Tohu Tiketike a Te Waka Toi award for outstanding achievement in Māori art. She acted as a mentor for young weavers, says Hana Morgan (Awarua).

“She was absolutely skilled not just around the art of weaving, but in the knowledge around her natural environment. She took my weaving to a higher level.”

Although Te Aue was born in the North Island at Marokopa and brought up in Waitomo, her involvement with Cliff Whiting on two major Ngāi Tahu marae projects – Takahanga Marae at Kaikōura and Te Rau Aroha Marae at Awarua – strengthened relationships between the tribes. She was a huge networker, and a simple phone call would have a rūnanga in the south shipping keikei or paru to a marae in the north and vice versa. “It meant we’ve restored, repaired or built more meeting houses in the last 30 years than in the previous 50 to 100 years,” says Hana.

“We’ll always appreciate that even though she was from another iwi, she was always prepared to share her knowledge.”