Toi Iho
The artist and the mutton birder

There they shared Ngāi Tahu kai with their hosts, and stories of gathering mahinga kai through internet phone calls via Skype with whānui. Ex-restaurateur Ron acted as chef on the trip, cooking tītī and tuna to share. In return, he was looking forward to working with Native American chefs and sampling their food, such as chillis and flatbreads. 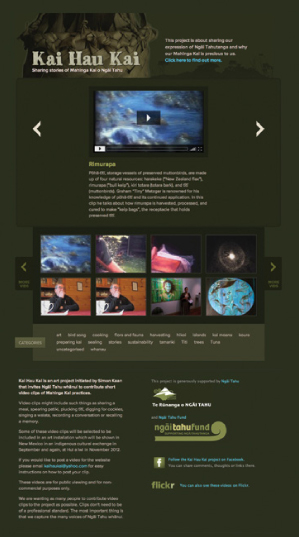 The pair planned to workshop ideas around mahinga kai while being hosted by the Native American college of Contemporary Arts in Santa Fe. “We will put together a hākari at the end of the wānanga, which will be about preparing food from a Ngāi Tahu perspective and a Native American perspective,” Simon told TE KARAKA shortly before leaving for New Mexico..

“Our whānui will be Skyped in to take part in discussions around the food. Those Skype calls will be recorded, turned into video loops and played in an installation at the International Symposium of Electronic Arts. The audience will be able to come in, eat our traditional kai, and have someone talking to them at the end of the table via the video loops.”

The idea came to Simon (Ngāi Tahu – Kāti Irakehu/Kāti Mako ki Wairewa, Guangzau, Satu Village) while taking part in a multimedia project called The Asian, which was exhibited in Dunedin in 2010.
As part of that exhibition, he was based in a Chinese restaurant and held internet phone calls via Skype with people in a nearby art gallery.

“People came in and shared a virtual lunch with me. It sort of got me thinking about how we communicate around food and how that works online. How do we share online?

“For one meal my cuzzie came in and did a karakia in the gallery. Well, how does that karakia count for my food over here? Does it travel through cyberspace? How relevant is it to communicate around food in cyberspace?

“Food is a ritual we partake in to different degrees and this can come under the idea of performance art. Whānau who are Skyped in will essentially become part of the art work.”

Simon had a website built, www.kaihaukai.co.nz, with seed capital from the Ngāi Tahu Fund. On the site are stories of mahinga kai collected from Ngāi Tahu whānau.

The website will continue after the New Mexico visit and the mahinga kai stories will become a valuable archive, he says.

“I want more and more people from outside to participate. It’s a timing issue because it’s not the season to be gathering kai but the website will continue, hopefully, to be a resource for us to contribute to and develop over time.”