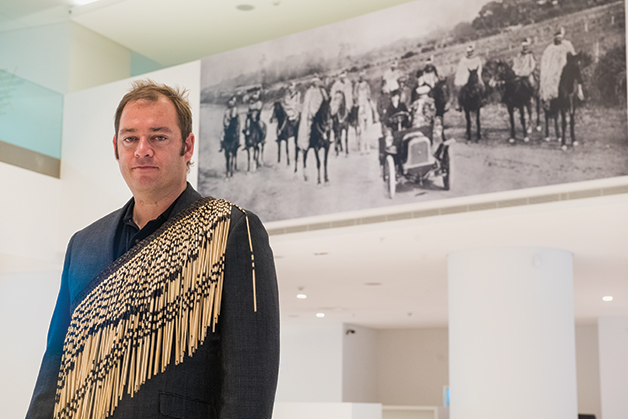 Ngāi Tahu artist Nathan Pohio (Waitaha, Ngāti Māmoe, Ngāi Tahu – Ngāi Tūāhuriri) is currently exhibiting his work, Raise the anchor unfurl the sails, set course to the centre of an ever setting sun! at one of the most prestigious art events in the world, documenta; both in Kassel, Germany, its traditional home, and in Athens. The artwork features a 1905 photograph of Lord Plunket visiting Māori leaders at Tuahiwi Marae. Nathan and his work came to the attention of the documenta 14 curator when he was chosen as a 2016 finalist for the Walters Prize, New Zealand’s most coveted art award, celebrating the best of New Zealand contemporary art. Nathan is pictured here at the opening of documenta 14 at the National Museum of Contemporary Art (EMST) in Athens, 8 April 2017. Nathan and his work will be featured in Ngā Ringa Toi o Tahu, a series of online mini art documentaries on Ngāi Tahu artists, to be released on 1 July.
ngaitahu.iwi.nz/toi