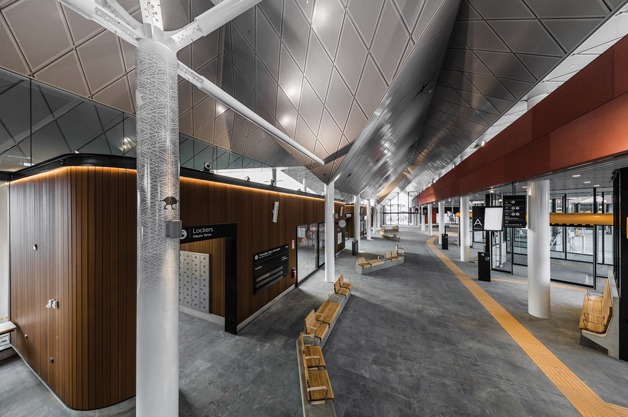 In the wake of the 2011 earthquake, mana whenua Ngāi Tūāhuriri realised that one way to bring meaning to the destruction in central Christchurch was to get involved in the recovery process, and ensure that Ngāi Tūāhuriri/Ngāi Tahu identity is visible in the city. Despite the historical and cultural significance of the area for Ngāi Tūāhuriri, Christchurch has always been a colonial city in terms of its design aesthetic.

The rebuild has provided a unique opportunity for mana whenua to reinforce their connection with the city. In 2014 Ngāi Tūāhuriri established the Matapopore Charitable Trust. The Trust works in partnership with CERA (the Canterbury Earthquake Recovery Authority) on the 17 anchor projects that make up the Christchurch Central Recovery Plan 2012. The anchor projects are developments intended to revitalise the city by stimulating investment and cultivating a sense of community in the CBD. They include large-scale projects such as the Justice Precinct, the Convention Centre Precinct, and the Performing Arts Precinct. Matapopore is tasked with ensuring that Ngāi Tūāhuriri/Ngāi Tahu history and values are represented in each of these projects.

It is the greatest opportunity Ngāi Tūāhuriri has had, says trust chair, Aroha Reriti-Crofts (Ngāi Tūāhuriri – Ngāi Tahu). “What’s happening now is more important because we’ve had the chance to be involved. It’s very exciting and satisfying.”

The significance of the Matapopore involvement is huge says Matapopore general manager Debbie Tikao. “It’s the first time that an indigenous culture has been involved in design processes on this scale,” Debbie says. There was initial uncertainty around what those outcomes might be, but this quickly transformed into enthusiasm and requests for even greater input as Matapopore demonstrated the value they could bring to the design process. For Debbie, this was exemplified at a steering group meeting for the South Frame anchor project when the CCDU project manager said, “The design team has done a great job, but it’s Matapopore who have brought the soul to this project.”

Ngāi Tūāhuriri/Ngāi Tahu values such as whakapapa, mahinga kai, manaakitanga, mana motuhake, and ture wairua, guide the work of the Matapopore project teams. Dr Te Maire Tau, Ngāi Tūāhuriri Upoko, Ngāi Tahu historian and director of the Ngāi Tahu Research Centre at the University of Canterbury, says the values can be captured by the overarching philosophy laid down by Ngāi Tūāhuriri Upoko Pita Te Hori in 1861: Kia atawhai ki te iwi – Care for the people. This simple statement provides the foundation for the Ngāi Tūāhuriri/Ngāi Tahu Grand Narratives, a comprehensive history of Ngāi Tūāhuriri in Canterbury written by Te Maire and others. Te Maire intended the narratives to act merely as a starting point for the design processes of the artists involved in Matapopore.

“I haven’t wanted to keep a hard grip on this. I really wanted the artists to be able to think for themselves,” Te Maire says. He says that this left the artists with two big challenges: interpreting and designing around the values, and developing a unique Ngāi Tahu aesthetic that doesn’t borrow from other iwi. 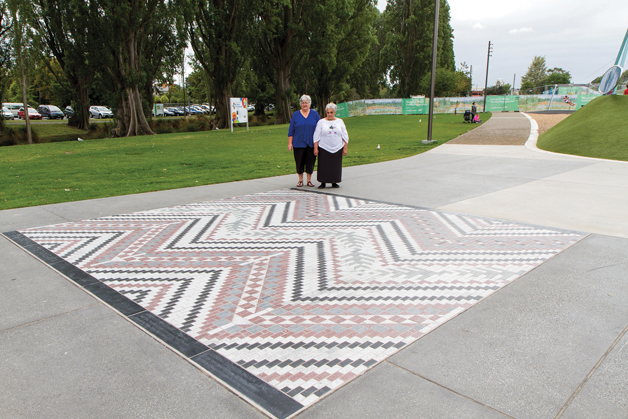 Morehu Flutey-Henare and Reihana Parata at Tākaro o Poi (the Margaret Mahy Playground), the site of the first Whāriki to be laid.

Two of the first artists to face these challenges were Ngāi Tūāhuriri weavers Reihana Parata (also known as Aunty Doe), and Morehu Flutey-Henare, who share a long-standing creative partnership.

Their contribution, Ngā Whāriki Manaaki, depicts the progression of a traditional pōwhiri in a series of 13 original whāriki designs. With the help of graphic designer Wayne Youle, Aunty Doe and Aunty Morehu were able to translate patterns that would traditionally be used to weave large floor mats into templates that could be laid using coloured paving stones. The 13 individual stone whāriki form part of the Art and Literary Trail, and will be installed along Te Papa Ōtākaro/the Avon River Precinct promenade. The 13th and final whāriki was the first to be installed in December 2015, and is located outside Tākaro a Poi (the Margaret Mahy Playground) on the corner of Manchester and Armagh Streets. Matapopore project manager for the Ōtākaro, Keri Whaitiri (Ngāi Tūāhuriri – Ngāi Tahu, Ngāti Kahungunu) says she was left breathless after her first site visit. “It was so beautiful to see it in place and know that it can stand the test of time and is built to last.”

The project as a whole is designed to provide a symbolic welcome for people visiting the city, and to reinforce the connection that we all share with one another.

The remaining whāriki will be installed over the next two years, with the project due for completion in early 2017. In the meantime, an interpretation panel will be erected at each site, featuring an image of the design and an explanation of its meaning.

When it comes to identifying the underlying value of Ngā Whāriki Manaaki, the clue is in the name. “We utilised the theme of manaakitanga after we read the kōrero from Te Maire,” says Morehu. “It came to us one night – boom! If we used the tikanga for the pōwhiri, then the tikanga for the whāriki would already be laid out through the city.” In addition to this, each whāriki is linked by a common pattern of three horizontal white zigzags that represent the waters that bring people together. The project as a whole is designed to provide a symbolic welcome for people visiting the city, and to reinforce the connection that we all share with one another.

The pair were unable to find any traditional Ngāi Tahu whāriki patterns so they decided to create their own completely original designs. This makes their whāriki totally unique, as their original designs partner with the new application of weaving patterns into paving stones.

Keri says that this continuation and development of traditional art forms is the most exciting thing about the work of Matapopore. “It’s Ngāi Tahu and Ngāi Tūāhuriri being able to express themselves openly in the public space, leaving these gorgeous pieces that the future generations can go back to. Suddenly there’s this real connection to the spaces within the city.”

Aunty Doe describes their involvement in the project by saying simply, “We were called, and we came, and we’re here. That’s virtually it.” Aunty Morehu agrees. “For us, it’s just about Ngāi Tahu being in the city. That’s enough for us really.” 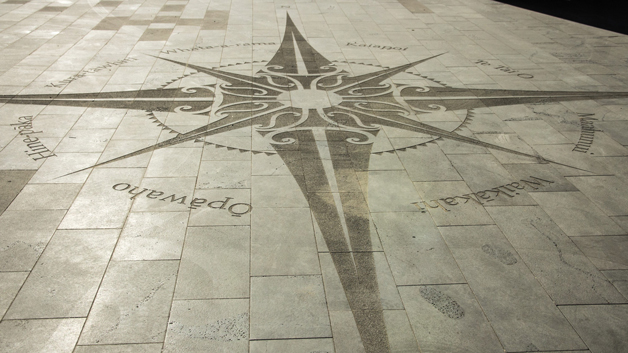 A 10 metre wide compass at the main entrance of the Christchurch Bus Interchange, highlights places of significance to Tūhaitara/Ngāi Tūāhuriri.

Ariki Creative is another artistic partnership exploring the way that Māori art is used in their work for Matapopore. Hori Te Ariki Mataki and Morgan Mathews-Hale specialise in digital and print media, and use their backgrounds in carving and tā moko artistry to influence their design processes.

“The medium has changed but the philosophy’s always the same,” Hori says. “When I was looking at doing design using computers and different software, it’s just like changing tools. What the designs mean is exactly the same as it’s always been.”

Originally, Ariki Creative was contracted by Matapopore to digitise the designs of other artists. “They must have developed a bit of faith in us, because we ended up doing some of our own design work,” says Morgan.

Morgan and Hori created the artworks for the Christchurch Bus Interchange, which opened in May 2015. This was the first of the anchor projects Matapopore was involved in and was led by Arapata Reuben (Ngāi Tūāhuriri – Ngāi Tahu).

This presence is further acknowledged by the 10 metre wide compass highlighting those places of significance to Tūhaitara/Ngāi Tūāhuriri at the main entrance.

“When I was shown the architects design plans I immediately saw the shape of a waka and thought this is an amazing piece of canvas given to our artists, hence confirming our narrative be based on travels to and from work (mahinga kai places – Hine-Pāka, Ōpāwaho), whānau and migrations just like a Bus interchange.” 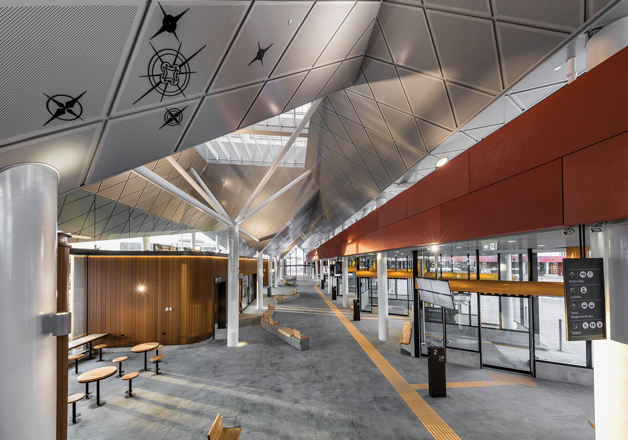 The designs are based on the narratives of Ngāi Tūāhuriri migration and travel. Working with the concept of navigation, works were created using Māori star lore and traditional constellations, with the underlying meaning that landscapes can change, buildings can change, but the stars have been there forever. The constellations can be seen embedded in the ceiling above the main passenger lounge in the Bus Interchange.

“It was the first time our statement was made,” says Aunty Aroha. “The designs were done by our people and it was just beautiful to see them, it was the exciting start of it all.”

The chance to be involved with Matapopore has been positive for Hori, who is from Ngāi Tūāhuriri himself. “I grew up in Christchurch,” he says. “The people have been there, but the stories haven’t. Christchurch is the whitest, blankest canvas in both senses of the word, and to be able to influence some change coming from Ngāi Tūāhuriri is mean.” He says that the opportunities provided by Matapopore have brought Ariki Creative into a different field, as they extend out of digital and print media into interior and exterior design.

Debbie says that this artistic development is consistent with one of the key objectives of Matapopore: to provide opportunities for growth and employment for Ngāi Tūāhuriri/Ngāi Tahu artists. Over the next few years, as the anchor projects are completed, we will see designs by well-known artists such as Lonnie Hutchinson, Fayne Robinson, and Priscilla Cowie, as well as numerous emerging designers who have been granted this unique opportunity to see their work become part of Christchurch’s enduring identity. Above all, Ngāi Tūāhuriri/Ngāi Tahu will be able to see their history and values reflected in the buildings and spaces around them. As Debbie says, “In years to come, when my children’s children are walking through the city, they’re going to be walking through a place where they feel a sense of connection, where they can see themselves.”