Toi Iho
Carving out a legacy 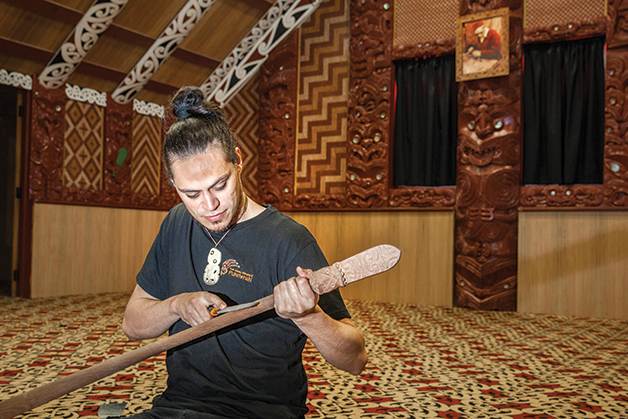 Rongomai-Tawhiti Parata-Taiapa is following in the footsteps of his famous grandfather. Kaituhi Aaron Smale reports.

When Rongomai-Tawhiti Parata-Taiapa visited St Mary’s Church in Tikitiki with his father and daughter, it was an occasion that had so many beginnings and endings. His daughter Hamoterangi was a newborn. His father Barney would pass away a short time later. And the church was where their whanaunga Pine Taiapa started his illustrious career as a carver.

“We went over to Tititiki and Papa blessed Hamoterangi in our church. It was good that he got to spend that time with her and meet my partner (Patricia Simon).”

Rongomai-Tawhiti’s grandfather Hone Te Kauru, also known as John, was Pine’s younger brother and the Ngāti Porou siblings would be instrumental in reviving traditional Māori carving, with the encouragement of Sir Āpirana Ngata.

It’s definitely had its pressure. People know straight away, ‘Yep, you’re a carver.’ I just try and stay humble about it and keep doing the mahi, I guess. I’m trying not to get caught up in the legacy. It gets overbearing sometimes.

Not only did they carve a number of wharenui and other buildings throughout the country, they also established the carving school at Te Puia New Zealand Māori Arts and Crafts Institute in Rotorua, where Rongomai-Tawhiti is a student.

Rongomai-Tawhiti (Ngāi Tahu – Kāti Huirapa ki Puketeraki; Ngāti Porou) finished his three-year diploma last year and has been invited to do a fourth year, which is like an honours year.

His study has been bracketed by life’s major events.

His mother Ranui Parata died just before he started his study and his father Barney Taiapa passed away shortly after Rongomai-Tawhiti’s graduation and the birth of his daughter. 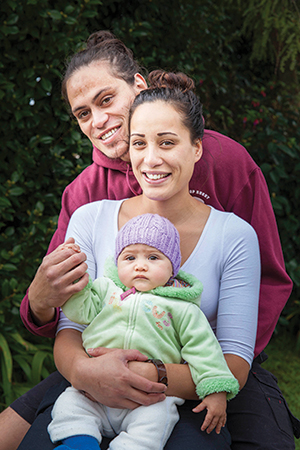 “It’s been a really, really rough ride. A month before I came up Mum passed away. That was really hard leaving Karitane and Dunedin to come up here and do my thing. I didn’t really get home to see Papa. The birth of my daughter (Hamoterangi) was awesome.”

In the time between he has been immersed not only in training to be a carver, but in absorbing stories about his koro, who had such a huge influence on the institute.

“Two of our tutors, James Rickard and Clive Fugill, were tutored under Koro. So they keep on telling the stories about how he was and how he taught, and how they moved around the country. You still feel his presence here in the mahi we do. The haka we do is in remembrance of him.“

Bearing the Taiapa name has put more weight on the shoulders of the young carver.

“It’s definitely had its pressure. People know straight away, ‘Yep, you’re a carver.’ I just try and stay humble about it and keep doing the mahi, I guess. I’m trying not to get caught up in the legacy. It gets overbearing sometimes.”

His last conversation with his father was about how proud he was that Rongomai-Tawhiti was carrying on the family tradition. There was almost an inevitability about it.

“We always knew whakairo was there. Papa didn’t talk about it much. But me and my brother used to go into the mānuka forest and build these little whare, without knowing anything about whakairo. We just had a passion for kaupapa and tikanga Māori.”

While his Ngāti Porou connections are strong, he grew up among his Ngāi Tahu whānau and regards the South Island as home.

“Mum and Papa decided to go back down to Karitane. We grew up amongst the Parata whānau there. That’s home for us. It’s a beautiful place, I love Karitane.”

His tutelage has been heavily influenced by his grandfather, but there has been ongoing debate among carvers over the years about how far one should depart from the traditions he and his brother laid down. 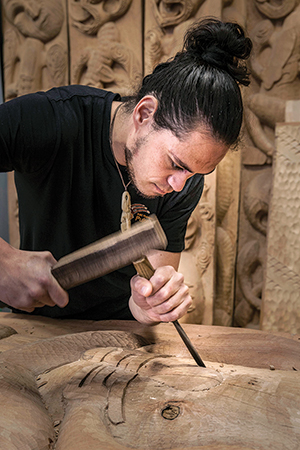 “My tutor here, Clive, he strictly stays to the traditional style in what Koro had taught him. When you look at a lot of other fullas that have been through here, like Lyonel Grant, he has contemporised his mahi. It’s still Māori, but it’s his own style. It’s up to the person how they see whakairo.”

He sees himself taking his skills back home to make available to Ngāi Tahu.

“My short-term plan is about my reintegration into Ngāi Tahu and how I can help our people down there.”

In the meantime, he is rounding out his training by delving more into whakapapa and honing his research skills. He has also added to his experience with being involved in teams that have tackled large projects, such as a 30 x 13 metre mahau (front porch), which was unveiled in 2013 at Te Matatini Kapa Haka Festival in Rotorua.

Our interview is accompanied by the constant tapping of mallets on chisels in the background, a reminder that all shaping of timber happens one tap at a time.

“Patience is definitely one of the skills you’ve got to have, because if you don’t have patience it affects the quality of your work. If you rush things it’s going to look rushed,” Rongomai-Tawhiti says.

Carving has become more than just a skill or a trade – it’s become a way of life.