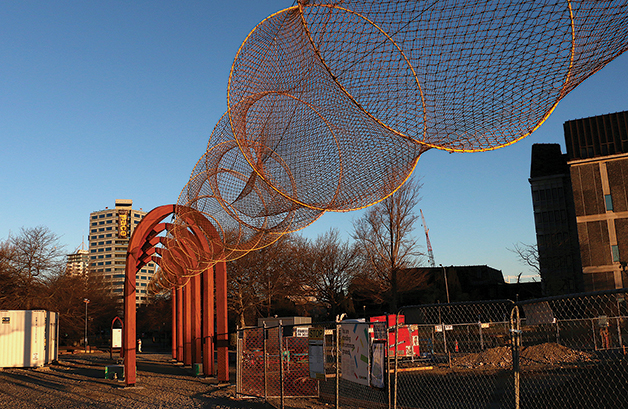 Sitting beneath the Arcades Project on a Sunday, the stillness is palpable.

The reverberating earth and the drone of heavy machinery that are incessant throughout the week are quiet. The cranes stand still across the skyline, towering like sleeping giants. The dust is settled, the traffic quieter, and the sense of unyielding “progress” calmer.

Above me, an enormous 50-metre-long hīnaki moves gently and organically in the breeze, its permeable woven nature a visual respite from the tonnes of concrete and surrounding scaffolding.

In Te Ao Māori you’ll often hear it said that we “walk backwards into the future”– ka mua, ka muri. Our vision fixed on history, learning from those who have gone before us as we forge new paths.

Amid its urban surroundings and in this ever-evolving city, the giant hīnaki speaks to those who have gone before us, and to those who will follow. Its impermanence is just another reminder of the fragility that surrounds. It is a clue to the environment and the relationship our tūpuna had with this whenua, with the Ōtākaro/Avon River.

The hīnaki, or eel trap, is the latest public artwork by Lonnie Hutchinson (Ngāi Tahu, Samoan). The work, titled “I Like Your Form” is located at the former site of the Crown Plaza Hotel, in close proximity to the Ōtākaro/Avon River and what was earlier known as Market Square (Victoria Square).

The work is a response to an invitation by FESTA (the Festival of Transitional Architecture) to intervene in the Arcades project, temporarily transforming the space.

For Lonnie, who is actively engaged in several of the rebuild anchor projects, this installation posed an exciting opportunity to make visible the mana whenua in this urban landscape. It is a recolonisation of the urban environment, and serves as a visual reminder of the traditions and cultural significance of the space, aspects which are not immediately apparent amongst the rebuild.

For Lonnie, the hīnaki can be interpreted in many ways. The trumpet-like form can be seen like a karanga. “It’s a shout out in a sense, a calling to the centre of town, to that site, to the river. It’s a reclaiming of a site”. With an immense personal investment in the project, it was an opportunity to “put something that has the essence of Māori and Ngāi Tahu back in the space”.

While the form is a literal one, its scale and context offer an invitation to the viewer to reimagine the space, the whenua, and the future.