A quiet sense of achievement

Adam Lord found his passion in life with the help of He Toki ki te Rika. Kaituhituhi Tony Bridge reports.

Sometimes it takes time to find your path in life. Adam Lord (Ngāi Tahu, Tuwharetoa, Te Whānau a Apanui, Ngāti Porou, Ngāti Kahungunu) seems to have found his at the age of 24.

Born in Hamilton in 1989, Adam later moved with his family to Katikati in the Bay of Plenty, where his father worked in the labs at the Waihi gold mine. When he was seven, the family moved again, this time to Te Anau in Southland, where his father had secured a job involved in the construction of the second tailrace tunnel as an engineer, running the lab at Manapouri.

Adam was 11 when his parents split up and he moved back to Christchurch with his mother. After a brief period at Chisnallwood Intermediate, he moved on to Burnside High School. Halfway through Year 12, he had had lost interest in school, and was itching to get out into the workforce. He took a labouring job at the Kate Valley landfill for a couple of years. Then, realising that was not going anywhere, he decided to go to Australia to work, and got a job as a storeman with Toll. That lasted for two years before he moved back to New Zealand.

When he got back, he tried his hand at study, taking on a personal trainer course, but lost interest in that, dropped out and returned to Kate Valley as a labourer. It was about that time that he realised he was going nowhere. “I saw that I needed to grow up, to make a move and do something properly.” About the time that the work at Kate Valley ran out, he heard about He Toki ki te Rika, the trade training programme launched by Te Rūnanga o Ngāi Tahu, CPIT and industry partners to train Māori for leadership roles in the city’s recovery.” I went along to an open evening they were having at CPIT, liked what I saw and signed up on the spot”. He entered the first intake in 2011.

After three months, he was having trouble supporting himself and studying at the same time, so he had a chat with his tutor, who set him up with some work experience. After a phone call, Louie McKenzie, the owner of McKenzie Builders, which has won a string of awards, including overall winner of the $1-2 million category of the Canterbury Master Builder’s House of the Year awards, gave him work experience. McKenzie liked what he saw, and extended the trial for another six months. At the end of that period he offered Adam an apprenticeship. Adam is now two years into his apprenticeship.

“He is going really well,” McKenzie says. “He has real initiative, and can think for himself. He also has a strong set of skills. He is a valuable member of the team. You know, he was involved in working on the house which won House of the Year and that was a really technical build.”
Adam’s supervisor and site foreman, Steve Van’tWout agrees. “ He asks a lot of questions, looks ahead and shows a lot of initiative. Louie likes to throw the young guys in the deep end and give them a real challenge to make them grow. The way Adam’s going he will be running a job by himself real soon.”

Steve explains that what sets the CPIT iTAB (Industry Training Association Building) apart is the method of assessment, which allows students to be assessed practically and verbally, usually onsite, rather than being expected to complete written assessments which test their ability to pass exams rather than demonstrate knowledge. Adam has done so well he has been awarded a certificate for being the iTAB Most promising Year 2 Apprentice.

“This is a really rewarding thing to do. Seeing a house rise from the foundations and come together gives me a real sense of achievement,” says Adam who wants to finish his apprenticeship, qualify and get more experience in the building industry. Down the track he hopes to start his own building company.

“He Toki has opened the door for me and given me a great opportunity. He Toki is a really good opportunity for young Maori. I would definitely recommend it, although you have to be totally switched on and motivated to do it.”

The new generation
He Toki ki te Rika, the Māori trade training programme was launched to connect Māori to the recovery of Ōtautahi. The programme is dedicated to creating the next generation on Māori trades leaders.

Te Rūnanga o Ngāi Tahu Kaiwhakahaere Tā Mark Solomon says “We are saying to our Māori youth, we’ll provide you with this training so that you can become the foreman, or engineer, or city planner, it’s about leadership.”

The initiative was launched by Te Rūnanga o Ngāi Tahu, CPIT and Hawkins with the support of Te Puni Kōkiri, the Tertiary Education Commission and the Ministry of Business and Innovation.

The course was set up nearly three years ago in response to the devastating February earthquake. Tā Mark made the comment in an interview that Christchurch now had the perfect opportunity to introduce an apprenticeship hub. His call was heard by Te Tai Tonga MP Rahui Katene and she brought it up in question time in Parliament. These simply actions ultimately lead to the creation of He Toki, which has changed the lives of so many Māori in Canterbury.

Since the beginning in June 2011 over 200 students have completed a course resulting in 89 transitions to full-time employment and 96 enrolments in further training. This year there were another 220 enrolments into He Toki courses. 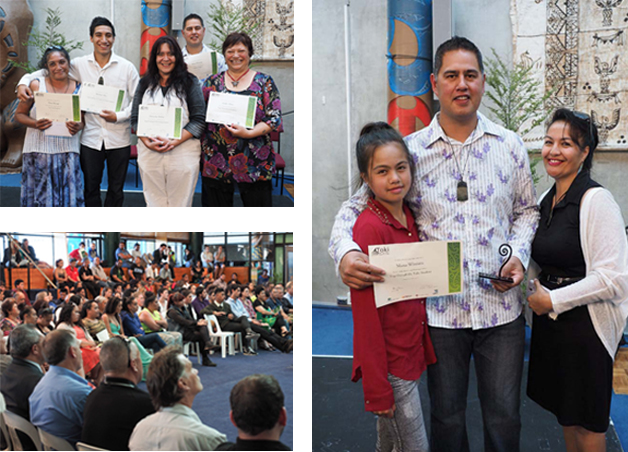 As part of the course He Toki students are taught the whakapapa of the programme and the history of Ngāi Tahu.

From the 1950s to the 1980s Rehua Marae was home to hundreds of Māori boys and girls who moved to Christchurch to learn a trade. Rehua Marae continues the proud tradition of supporting Māori trade training by hosting He Toki scholarship evenings as well as other significant He Toki events.

Local hapū Te Ngāi Tūāhuriri have played a key role in delivering the Ngāi Tahu history component of the course. In return, He Toki students have contributed to some of Kaiapoi Pā Trust’s restoration work.