A member of the Ngāi Tahu “A Team” negotiators throughout the settlement negotiations, Charles Crofts’ passion and commitment to the iwi back then and in the 20 years since can only be described as resolute. Kaituhi Alice Dimond recently spent time with the infectious character who is Uncle Charlie. 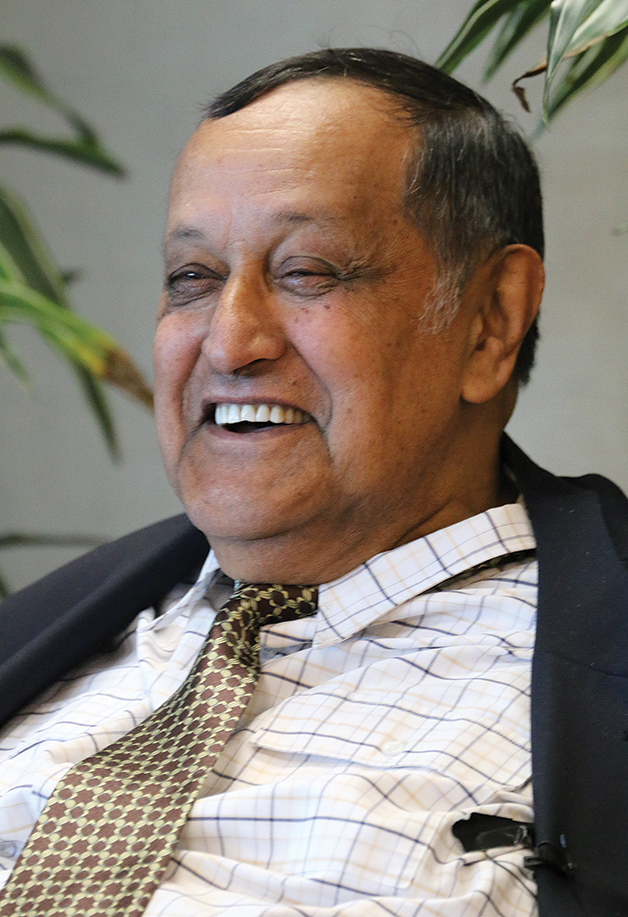 It is unlikely that you can have a discussion about the Ngāi Tahu Settlement without hearing stories about Charles Crofts (Ngāti Huikai, Ngāi Tūāhuriri), or as most of the iwi know him, Uncle Charlie.

As Charlie tells it, it was the “luck of the draw” that he was Kaiwhakahaere of Te Rūnanga o Ngāi Tahu at the time of settlement. However, as we speak in the home he shares with his wife Meri, eating mousetraps and sipping on tea, it becomes clear that there was more than just luck at play. Charlie is a man who was always going to do great things.

“It is said that you learn more at the feet of your Pōua and Tāua than anywhere else, and that was true for me. I didn’t realise it as a kid but when I started getting into the Ngāi Tahu negotiations I suddenly realised, ‘Oh I know all this stuff,’ – it was all coming back to me through the things that I had heard.”
Charlie Crofts Ngāti Huikai, Ngāi Tūāhuriri

Although most people will know Charlie as being from Koukourārata, he was born at Tuahiwi, in the back bedroom of his mother’s house. This means that Charlie calls two places home, and he speaks fondly of what each place has given him.

His Pōua, W.D Barrett, was one of those who were instrumental in the creation of the 1848 Blue Book, and Charlie says he would frequently hear his Tuahiwi whānau discussing Te Kerēme.

“It is said that you learn more at the feet of your Pōua and Tāua than anywhere else, and that was true for me,” says Charlie. “I didn’t realise it as a kid but when I started getting into the Ngāi Tahu negotiations I suddenly realised, ‘Oh I know all this stuff,’ – it was all coming back to me through the things that I had heard.”

After 20 years in the army, Charlie says he did not “start up with Māori stuff again” until the mid-1980s, when Meri and her sister Daisy decided they should return to Koukourārata to help support those still living at the papa kāinga.

It was here that Charlie started to realise the value of the knowledge he had acquired at the feet of his Pōua, as he saw how others responded to it. “I was under the personal opinion that I had to find my own turf in life, and Koukourārata offered that to me,” says Charlie. “When I had thoughts or opinions in Port Levy, people would always be saying, ‘Oh, tell me more.’” Before long, Charlie was asked to be Chair of Koukourārata, a role he still holds to this day.

With this in mind, a motion was put forward at a board meeting to put in place a new structure that could take Ngāi Tahu into the future.

“I remember that I seconded that motion,” says Charlie, “and I know this because I remember Aunty Rima Bell turning to me and saying, ‘Second that!’ I didn’t even really know what that meant but I knew I had to because one of my old Aunties was telling me to, so I seconded it. I think that is probably one of the wisest choices I have ever made.”

“I am proud to be able to say that I brought home the 170 [million dollars as part of the Ngāi Tahu Settlement], which is something no one else will ever have the opportunity to bring home,” says Charlie. “I say that I brought it home, but it really was Tipene [O’Regan] – he was the chair of the negotiators. I was just the chair of the iwi authority at that time.” However, Charlie was more than “just the chair”, and played a significant role in these negotiations as part of the “A-team”.

“We had an A-Team, a B-Team and a C-team, so as you can see we were really imaginative in the naming of our teams,” laughs Charlie.

“The A-Team were the negotiators, the B-Team would work out all the stuff we needed to know, and the C-team would determine all the nuts and bolts of the issues that were brought to us.

“It was really quite funny because we would have the B-Team sitting around us and then suddenly I would have someone’s finger in my side and I would think, ‘Oh no, they want me to shut up,’ so I would quiet down.” 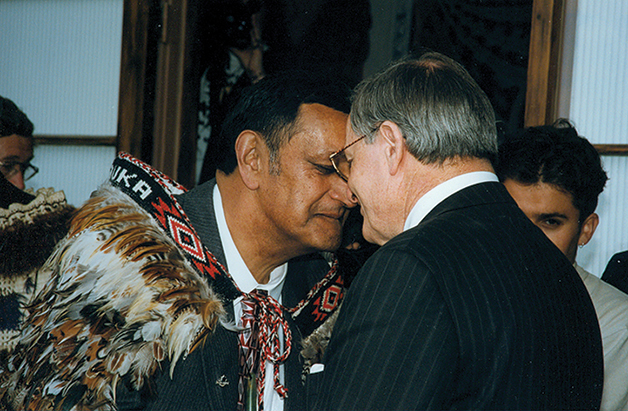 Charles with Prime Minister Jim Bolger at the signing of the Deed of Settlement in Kaikōura, 1997.

Charlie believes the range of people, knowledge, and skillsets that made up each of these teams was paramount to the success of the negotiations. He tells a story about an occasion where the importance of this collaboration was particularly apparent.

“I was sitting there and this fellow, Richard Meade [commercial advisor as part of the B-Team] gave me a dig in the side and said we needed to have a caucus, which means we would go to a private room as a team in the Beehive. We got to the private meeting and Tipene asked me, ‘What do we need a caucus for?’ and I had no idea!”

As Charlie recalls, Richard then went on to explain. “‘I have just realised that they are doing us out of interest,’ said Richard. ‘We are going to put the final figure to them and they will say that they will take it away. They are then going to take at least a month before they can talk to us again, and that time is worth money.’”

That day, Te Rūnanga o Ngāi Tahu managed to earn an extra 10 million dollars as part of the Settlement. “That was just something that the A-Team would never have thought of,” says Charlie.

When I speak to Charlie, the grounded and humble way he recalls these interactions makes it hard at times to remember that these narratives were the beginning of the thriving organisation that is Te Rūnanga o Ngāi Tahu today.

At one point during our conversation, Charlie takes me outside to show me the piece of pounamu that was used to symbolise the gifting of pounamu back to the tribe. It is sitting amongst the garden plants and other rocks, and if he hadn’t pointed it out to me, it would have gone unnoticed.

“It’s an ugly-looking piece,” laughs Charlie. “One night I had a phone call at 11 o’clock from Tipene, asking if I had a raw piece of pounamu. I told Tipene that I had an ugly-looking piece that I had been given from my nephew and he said it didn’t matter, so that’s what we used. I still sometimes give Lisa [Tumahai] a hard time now that I have the piece of pounamu that was given back to Ngāi Tahu.”

Despite this playful nature, Charlie is still human and shows raw emotion at points in our conversation. “The whole process of the negotiations was upsetting at times,” he says.

“Often I would be on the red-eye in the morning heading to Wellington, and then would fly home on the last flight that night. During that time O’Regan just did not seem to sleep. Whenever he wanted some crazy advice, and I mean crazy, he would just ring me and say, ‘Well, can you sleep?’” 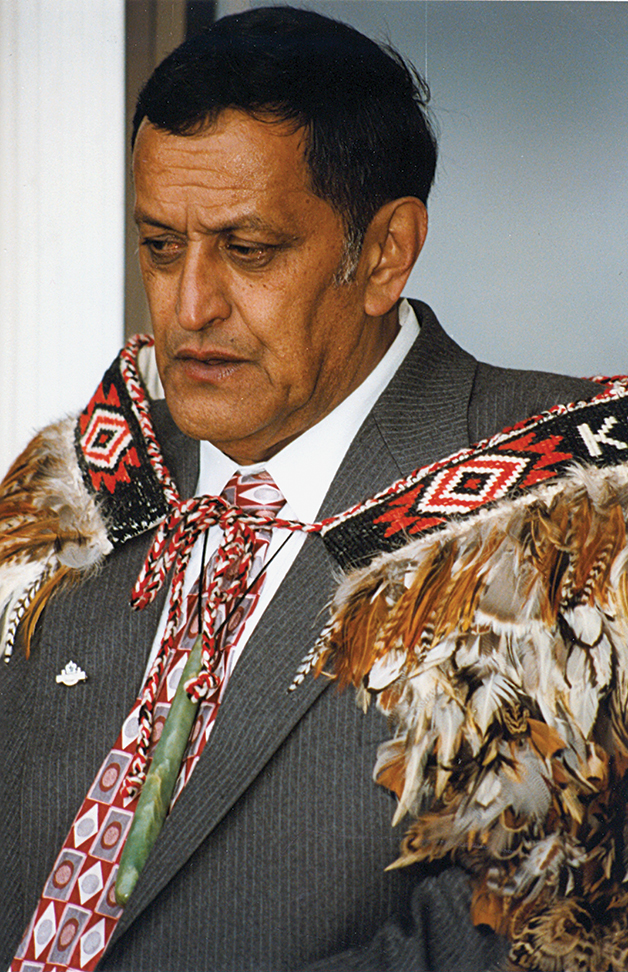 When I asked Charlie about the passing of the Ngāi Tahu Claims Settlement Bill in Parliament he paused for a moment, and then apologised, saying it still makes him “a little weepy”.

“It was marvellous. That’s all I can say,” he says simply.

Since then, the success of Te Rūnanga o Ngāi Tahu has made Charlie proud of the tribe and his own efforts as part of the settlement negotiating team. One thing that Charlie is particularly proud of is the revitalisation of te reo Māori within Ngāi Tahu.

“I think one of our biggest successes is the renaissance of te reo,” says Charlie. “The rest of our successes I expected, but the language was a surprise. What you have to realise is that te reo was just about completely dead amongst our people. Although I will never get to learning it myself, I love it when I hear young ones speaking it.”

As our kōrero nears an end, Charlie offers his recommendation for the tribe moving forward. “As far as commercial development goes, I have nothing but praise for the way we have developed. However, in terms of tribal development, I want to see some evolvement.

“We did not set up the structure of Te Rūnanga o Ngāi Tahu to stay as is forever, and it may be time we move away from the 18 [Papatipu Rūnanga]. I really want to see evolvement rather than devolvement within the tribe. And they better hurry up, because I am getting old,” he laughs.