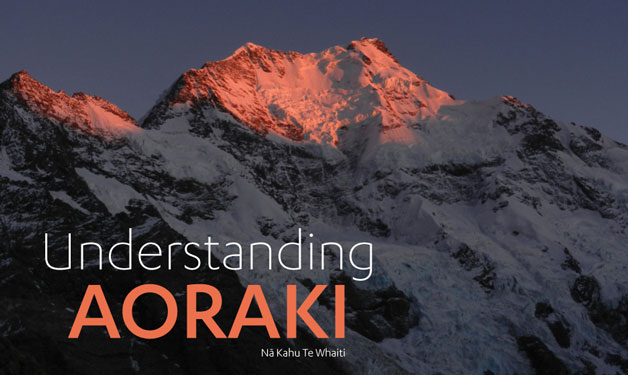 From a distance Aoraki is a quiet stunning vista. Close up, the sound of avalanches rumble through the valley, and sightseeing helicopters and planes fly above.

And as you get closer, the ridges of Aoraki get steeper and his boulders get bigger.

Alongside four other alumni from the Ngāi Tahu Aoraki Bound leadership development programme, I climb Kaitiaki Peak, right next to our maunga ariki Aoraki. Looking across, I realise just how enormous he is, his peak still one kilometre above where we stand.

From up there I can see to the east where his brothers make up the surrounding mountain range with Lake Pūkaki below, and beyond that the rolling Canterbury plains. It is far enough away from civilisation to blur human creations such as roads, cars and buildings.

Deadlines, bills and a worrying squeak in my car – all these concerns temporarily flee my mind. I am stunned by the natural beauty of Te Waipounamu and a view that encapsulates the whakataukī: Ko te kāhui mauka, tū tonu, tū tonu, ko te kāhui takata karo noa, karo noa ka haere – The people will perish but the mountains shall remain.

According to our Ngāi Tahu creation story, Aoraki is the eldest son of Raki (the Sky Father). Aoraki and his brothers brought the canoe (Te Waka o Aoraki) down from the heavens to visit Papatūānuku (the Earth Mother) – their stepmother.

When Aoraki and his brothers saw that they would not be able to separate their father from his new found love, they decided to return to the heavens to be with their, own, mother Pokoharua-te-pō.

However, when Aoraki was reciting the karakia for the journey back he made a mistake in his words. The waka stranded on a rock and he and his brothers were marooned. As time passed they turned to stone, their hair turned white and they became the highest peaks of Kā Tiritiri o te Moana – the Southern Alps.

Our group are on Kaitiaki Peak thanks to the relationship between Aoraki Bound and Alpine Recreation, a local outdoor adventure company.

Aoraki Bound combines the adventure-based learning of Outward Bound with Ngāi Tahu history and custom on a 20-day journey starting at Anikiwa near the Marlborough Sounds and ending at the base of Aoraki.

Alpine Recreation, a guiding company operating in Aoraki National Park, leads groups over the Ball Pass, which is the highest recreational climb you can do near Aoraki. The company’s founder, German immigrant Gottlieb Braun-Elwert, heard about Aoraki Bound in 2006 and, inspired by the journey, offered to take four alumni up the mountain to see Aoraki face-to-face.

Tragically, Gottlieb died guiding on Aoraki in 2008. However, his vision lives on and Alpine Recreation annually guides alumni up the mountain

I am accompanied by Matt Wheeler (Ngāi Te Ruahikihiki), Laura Vernon (Ngāi Tūāhuriri) and Nicola Hullen (Ngāi Tūāhuriri). We are led by Gottlieb’s daughter, Elke, who, at the age of 14 climbed to the highest peak on Aoraki.

From Kaitiaki Peak we survey the Ngāi Tahu takiwā and discuss the whenua below.

Pūkaki, the lake below, along with Tekapō and Ōhau made up a network of rivers, lakes, and wetlands that were important mahinga kai sites for Ngāi Tahu based in the centre of Te Waipounamu. Ngāi Tahu whānau would spend months there gathering kai – mostly weka and tuna.

The whenua below Aoraki also sits within the boundaries of the controversial Kemp deed, one of 10 deeds in which the Ngāi Tahu takiwā was divided and sold to the Crown.

Controversy surrounds the sale of the Kemp deed because Ngāi Tahu and the Crown disagreed over the inland boundary.

Ngāi Tahu believed Pūkaki and Aoraki were not part of this sale. The Crown believed they were.

The Waitangi Tribunal ruled in favor of the Crown. Maybe they should have held the tribunal hearing here, because looking across the Ngāi Tahu takiwā, seeing the trails and knowing the importance of the area, it’s very hard to believe our tīpuna would have signed away ownership of such a sacred mountain, and such a prosperous food source.