Wairua – a labour of love 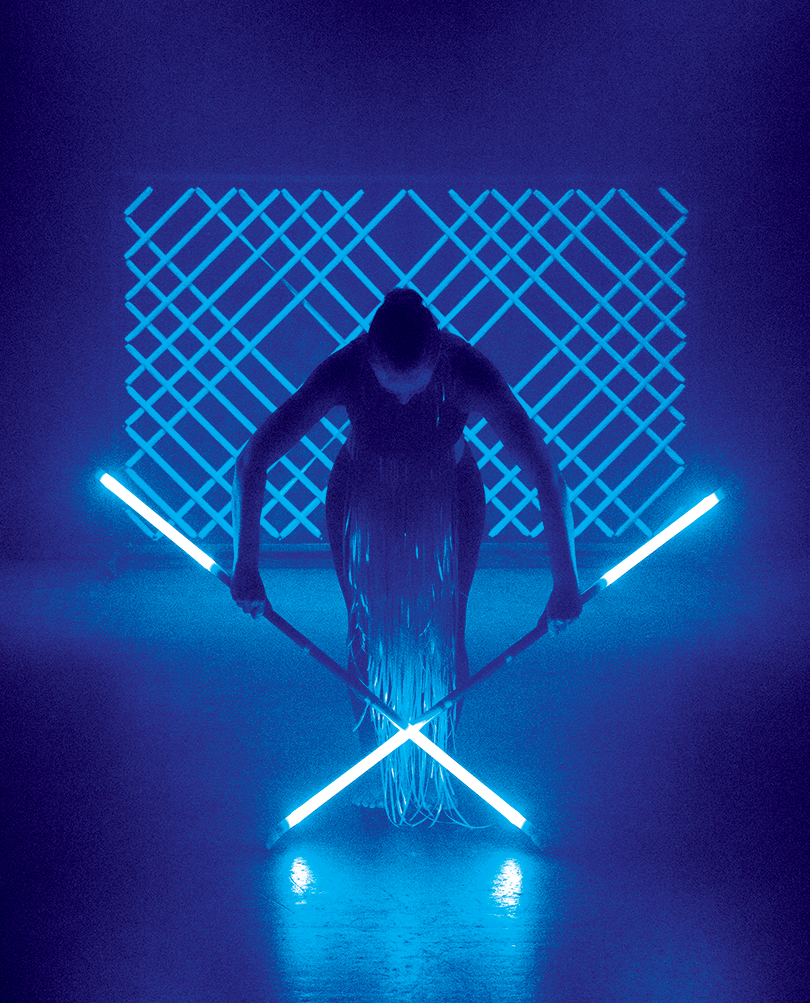 Ask Rua McCallum to describe how her retelling of the kāi tahu creation narrative came about and you quickly draw parallels between the birth of her immersive performance piece and the stories it weaves.

To call Wairua a labour of love is to understate the obvious. Theatre practitioner Rua (Kāi Tahu – Kāti Hāteatea ki Moeraki) has chiselled away at the bicultural, multimedia work in one form or another for 13 years, although it is within the last five that the story really began to take shape. The result is a work that explores a distinctly Kāi Tahu viewpoint and the whakapapa that connects us all.

Audience reactions run the gamut of human emotion – something Rua says reinforces her desire to create an artwork that could connect with those who see it.

“I set out for it to be an immersive, visceral experience,” Rua says. “From the comments that people have shared with me I think it has been different things for different people, but it has touched their hearts. On opening night, one person couldn’t speak – she just touched her heart and beamed at me. My response to her was that if I have touched one person, then I am happy.”

Rua left school at 15. After having children of her own and making the decision to leave her then partner, she returned to Dunedin to enrol in Māori Studies at the University of Otago. After the death of her parents she decided to pursue her interest in performance and eventually graduated with her Bachelor of Arts, complete with a Māori Studies major, minor in Performing Arts, and a postgraduate diploma in Theatre Studies. 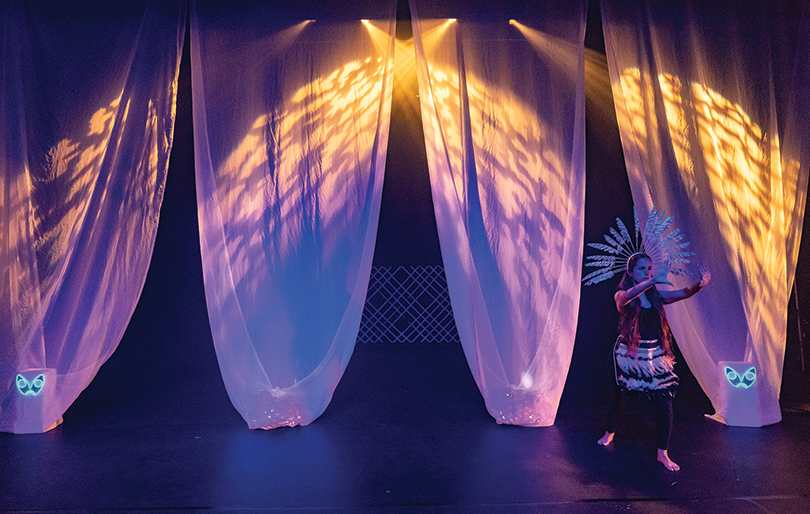 Rua is a well-known face in the cultural scene in Ōtepoti, in no small part thanks to a variety of roles – including co-teacher of a bicultural theatre paper at the university for 10 years and a stint working at Toitū Otago Settlers Museum. Her newest venture has seen her take on the position of kaitoko at Kāti Huirapa Rūnaka ki Puketeraki.

Wairua can trace its genesis to her desire to explore Kāi Tahu whakapapa, and the themes of identity and connection.

Rua calls the performance an “evolutionary process” that links back to a university internship in the summer of 2008. During that time she was involved in the creation of a theatrical piece exploring creation whakapapa, titled Rarotimu. In 2016, she joined forces with award-winning lighting designer Martyn Roberts. The duo had borne performances that explored the story of creation and decided to collaborate. The rest – as they say – is history. Wai=Rua A Line=Near was born. That year the performance was recognised with not one but two nominations at the Dunedin Theatre Awards, for outstanding innovation and lighting design – winning the latter.

Since then, in a case of life imitating art, the performance has been reimagined once more, and was seen, for the first time, at this year’s Dunedin Arts Festival. Piecing Wairua together has involved an entire team, all of whom have drawn on their considerable talents to boost the work.

“I don’t want the audience to intellectualise it, or try to work out what it was about; I want them to know it and feel it. To be transformed, to be blessed, not by seeing it but by engaging with something that helps them engage with themselves.”
Rua McCallum Kāi Tahu – Kāti Hāteatea ki Moeraki 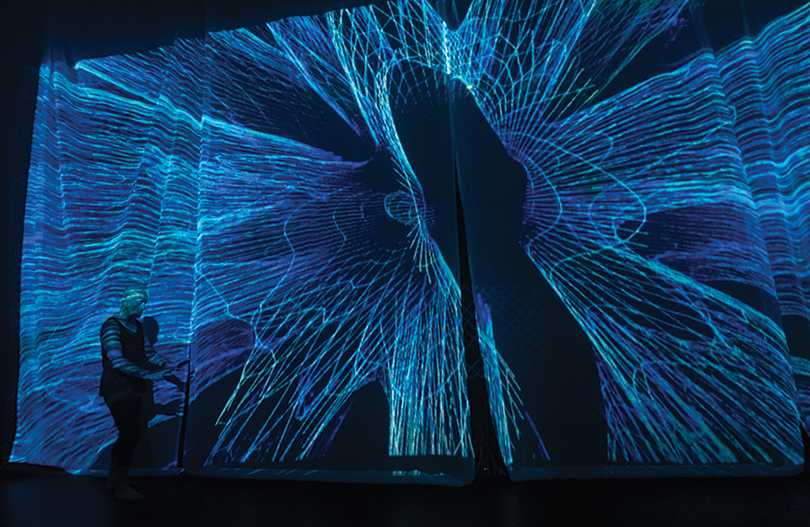 “Shannon van Rooijen was involved in Wai=Rua A Line=Near and stayed on with me, working on a series of workshops for Wairua, but due to work commitments left before we went into production this season. Taiaroa Royal and Louise Pōtiki-Bryant have worked with me through two workshops and a gruelling rehearsal period. Sound designer Paddy Free was there through two workshops and an intensely short rehearsal period, and Stephen Kilroy worked with us on the lighting. Over and above these people, Emere Leitch-Munro left her home in Taranaki with three children, to return to Ōtepoti to work on this season’s show, and then there was Ariana Tikao and Moana Wesley, who did many of the waiata vocals, and taonga puoro musician Alistair Fraser. Finally, Rangimoana Taylor helped me to conceptualise some of the underlying themes seen in Te Ao. All of these people need to be acknowledged. The ideas may have been mine, but without them Wairua would not have been what it was.”

Carved into four distinct acts, each representing different stages within the Kāi Tahu creation narrative, Wairua melds together dance, sound and light to touch all the senses.

The first stage, Te Korekore, begins by ushering the audience into the space. Drawing on elements of te ao Māori – karanga, karakia, a blend of original and traditional waiata – its heady mix of contemporary dance and movement, visual projections and surreal lighting states gives its viewers an immediate introduction into what to expect throughout the performance.

The second act, Te Pō, is more stylised. This act represents the femininity of the universe giving birth to itself – in stark contrast to Te Korekore, which introduces the concept of matter versus non-matter, and what exists within the nothingness of the dawn of the universe. Te Pō, then, is a representation of life beginning. It is mysterious and intuitive.

Te Ao, or the state of light, is in direct opposition to Te Pō: this part of the performance reflects a more masculine stage, and the balance between the mental and physical aspects of the universe. Te Ao is heavier on dialogue, and is more actor-led than the preceding two acts; reflecting the juxtaposition between the mental and the physical and their coming into being. 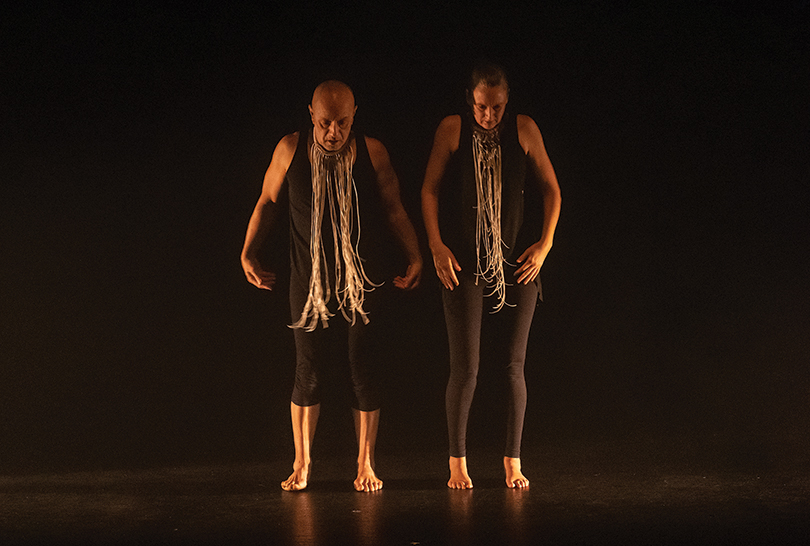 The final scene, Te Kore, is the performance’s dynamic culmination. Reincorporating aspects seen throughout the first three stages of Wairua while also introducing elements such as poi and mau rākau, the final scene again weaves contemporary dance with sound and light – images, shadows and silhouettes projected onto a gauze veil create a three-dimensional effect. This act represents a state in which all elements of the universe have woven together and are now intertwined as one consciousness capturing all the senses.

The impact on the audience can vary.

“I hope the audience is touched by it. Aroha, connection – not just spiritual, but a connection that their whole body, mind and spirit feels.

“One person told me she loved it, but didn’t understand what it was about. I replied, ‘That’s your first problem’. Another person sat on the edge of her seat for the whole 90 minutes and, at the end of it, she just said: ‘That’s what I needed’. She never justified that with why
she needed it, or what exactly she received that she needed, but for her she went away so happy that weeks later, when I saw her, she still felt that same happiness.

“I don’t want the audience to intellectualise it, or try to work out what it was about; I want them to know it and feel it. To be transformed, to be blessed, not by seeing it but by engaging with something that helps them engage with themselves.”