Walking into a new world 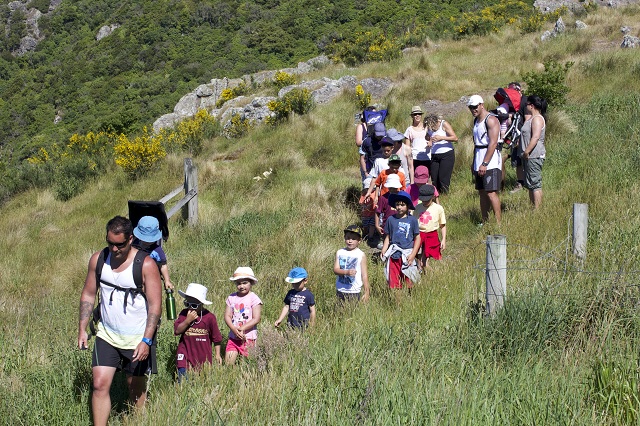 On a sunny Sunday morning at the top of the Port Hills, a young girl stands flanked by her parents. She looks up for reassurance and her mum offers a warm smile of encouragement. With new confidence, she turns to a group of peers and starts to recite her pepeha. The lineage that she repeats from memory is more poignant from here, with a clear view of the mountains in the west, beyond the rolling plains, and the turquoise waters of the peninsula to the east.

For the children of Te Puna Reo O Ngā Matariki, pepeha are just part of the routine. The group is made up of families committed to passing on te reo Māori to their children. They are practicing the philosophies championed by Kotahi Mano Kaika through reintroducing te reo Māori into their homes. As an extension of that philosophy, they meet for activities where parents and children have a chance to speak exclusively in te reo Māori with other families. Today they are walking along a hillside track, led by Eruera Tarena (Ngāi Tūāhuriri, Ngāti Irakehu, Ngāti Huirapa)

It’s clear that te reo Māori is the ordinary language of conversation for the tamariki, and that has been the goal from day one, Eruera says. “It’s about consistency and making it fun — if you try and get all tapu about it, it can turn the kids off. It’s important that we don’t force it, and that this is not viewed as a special club, but as a lifestyle. The tamariki attend bilingual units, kura kaupapa or mainstream schooling — all of their language needs are different; so when 8they come here it’s just one of those times when again it just normalises the language.”

Te Puna Reo O Ngā Matariki started about six years ago,  his wife,Te Marino Tarena (Te Āti Haunui a Pāpārangi) says. “Te Marino Lenihan and Priscilla Cowie wanted a group of Māori parents to bring up their kids with te reo, and we were all at Nōku Te Ao (kōhanga reo) at the time. We started with about five families and we’ve just grown from there over the years.”

The families take turns planning activities for the group. This ensures a variety of outings in different locations, usually once a month, which helps keep the children engaged. Because the trips are planned in advance, parents can take time to create a curriculum around the activities, offering the tamariki a chance to extend their Māori vocabulary and gain historical and cultural knowledge of the areas they visit.

Eruera stops the group at a high point in the track where they can appreciate the view. He points out to the flat plains and then to the rolling hills of the peninsula while explaining the features according to Māori folklore. On top of the hill, the stories become far more vivid.

Stace Hema and his whānau have been long-term members. For Stace it has been a big commitment but one that has its rewards, including a chance to spend quality time with his wife and children.

“I think (it’s been successful) because a lot of the members are friends anyway, and we’ve known each other for a long time through waka ama, dragon boating… so other families can come along and bolt on to a strong core, and I think that’s been the key.”

The more I spoke to the parents, the more it became clear that the success or failure of the whānau cluster was determined in the home. I continued my conversation with Te Marino Tarena, who, like the rest of the parents, is passionate about language revitalisation. She was willing to give some advice for families who want to make te reo Māori work in the home.

“Start in the home, speak as much reo as you can, and start to build those support networks. Then, if you want, of course, you can send your kids to bilingual schools or kura kaupapa.”

After speaking with some of the fathers, they were prepared to divulge the real secret to their success — the wahine. The mums meet every week with the under-fives, and that’s gone a long way to help build strong bonds between the children.

“A lot of the mums meet every Friday with babies and toddlers”, says Te Marino. “We have a kaupapa for a term, so this term we’ve been teaching our tamariki about jobs that exist out in the community. We just do age appropriate things like riding the bus into town.”

The children can now be considered native speakers of te reo, meaning that te reo Māori is their first language,  acquired from birth. “It’s an exciting development that’s significant for the wider iwi,” says Eruera.

“When these ones come in, we’ll have our first generation of native speakers in decades moving onto our marae, and it’s not just the reo that they bring — the cultural knowledge of this generation freaks me out.

“The most important thing about the puna is that it creates a critical mass. At the end of the day you can be as committed as you want as a parent, but the biggest influence for our tamariki is always going to be other children, so having other kids that speak Māori just normalises it.”

I was curious about what the parents had in mind for the children as they head towards their teens, a time where rebellion is to be expected.

“We do have a few teenagers in the group now, but as more start to transition into their teens, that’s going to be a challenge for us,” says Te Marino. “The tamariki are also at different schools, but those are the sorts of issues we sit down and discuss at the start of every year as a group, as well as planning our trips.”

“We do have a few teenagers in the group now, but as more start to transition into their teens, that’s going to be a challenge for us,” says Te Marino. “The tamariki are also at different schools, but those are the sorts of issues we sit down and discuss at the start of every year as a group, as well as planning our trips.”

The parents are optimistic about the future of their puna reo and ready and willing to face challenges as they arise. The intergenerational transmission of te reo Māori is hard work. It demands dedication, but this is a lifestyle they have all committed to, and when learning is made fun, they can all share in the success of language revitalisation.

As the children make their way back along the path for a shared kai, their mums take one last opportunity to ask the tamariki about what they have learnt. This reinforces learning and encourages a dialogue in te reo Māori. In those small but significant interactions lies the secret to this group’s success. A number of the parents are trained educators, and the children benefit directly from their expertise. The parents of Te Puna Reo O Ngā Matariki are in the early years of a lifelong commitment. They have pooled resources and knowledge in an effort to ensure a brighter future for their children, the iwi, and the Māori language.

“This is something that we should celebrate,” says Eruera. “These are the fruits of our labour, and the efforts of teachers at kōhanga reo, kura kaupapa and Kotahi Mano Kaika. I just hope we can guide them and give them the space to be who they are. “