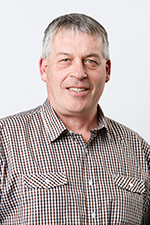 Terry has been actively involved in community work since 1989. He has served on various committees in the community, and continues to provide similar duties as an executive member of the Rūnanga.

He is the treasurer of the Hokonui Rūnanga Inc and has been the Hokonui Te Rūnanga o Ngāi Tahu representative since January 1999. Terry also serves on the Audit and Risk Kōmiti and the Corporate Governance Kōmiti. These kōmiti are an integral part of tribal development in areas of risk management, policy change and financial auditing procedures.

His focus is to ensure that the Hokonui Rūnanga can serve its members and the wider whānau and community. He believes that the runanga can protect and enhance spiritual, cultural, organisational, educational and economic aspirations of Hokonui in a setting of excellence, and that he can prudently represent Ngāi Tahu whānui by quality decision-making as a Te Rūnanga o Ngāi Tahu representative.