Takahanga Marae is the standing place for Ngāti Kuri. The Marae, buildings and grounds are sacred and has Mana that has to be respected by everybody who enters the Marae grounds – it is wahii tapu. The house that stands today is on the exact site of the original house, which stood some 200 years ago. The original Marae was built some 450 years ago by Kāti Mamoe.

The current Marae was built in the mid-1980’s and the Wharenui (meeting house) officially opened in January 1992. Beautifully carved it was built in honour of our tupuna Maru Kaitatea, son of the Chief Purahonui who led Ngāti Kuri south in a migration from the Wairarapa. Purahonui was killed during the migration and Maru Kaitatea took his father’s place as Chief and eventually settled in this area claiming mana whenua after being challenged to eat from a sacred poha (kelp bag) which contained the first fruits of the season. These fruits were tapu and were meant for high ranking chiefs only. Whoever ate from the poha and survived could claim manawhenua. Maru Kaitatea was the Chief who ate from the poha – thus claiming the area of Kaikōura. The poha was called Te Poha o Tohu Raumati which is the name of our Wharekai (dining room). Kaikōura’s exact name is Te Ahi kai koura a Tama ki te Rangi – the place where Tama ki te Rangi cooked crayfish. 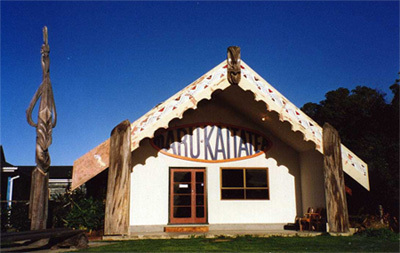 Today the Marae is the place where Ngāti Kuri, gather to korero and dialogue.

We realize that some people may never have been to, or stayed on a Marae before and that the environment will be unfamiliar to them therefore we would like to set your mind at ease regarding the venue and process.

We hope this website will provide some answers to any queries you may have. If you have any other questions or points of clarification before or during your time at Takahanga Marae, please do not hesitate to contact the Rūnanga office and speak with Gina or Raewyn Solomon or ask any of the Marae whanau present.