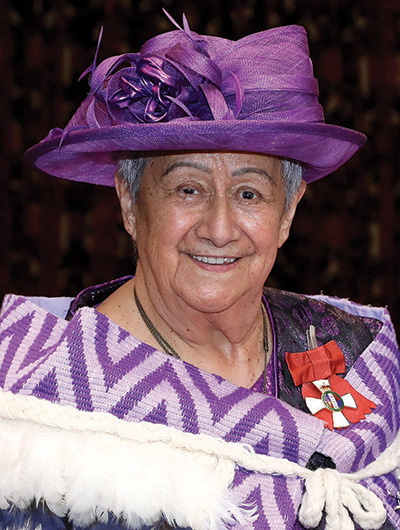 We are saddened to share with you the passing of Dame Aroha Hohipera Reriti-Crofts CBE. Dame Aroha offered decades of service to ngā iwi katoa through her mahi with the Māori Women’s Welfare League, as a teacher, as a guide, in kapa haka – her signature purple easily recognisable in so many realms within te ao Māori.

Dame Aroha was a kaumātua of Tuahiwi Marae and her community and has represented her hapū at an iwi level, including as a Representative on the Tribal Council of Te Rūnanga o Ngāi Tahu. She was active with the Māori Women’s Welfare League (MWWL) for 52 years and was president from 1990-1993. In her role at Māori Women’s Development Inc, Dame Aroha supported wāhine Māori in business start-up and development. As chairperson of Matapopore she ensured Ngāi Tahutanga and Ngāi Tūāhuriri values were embedded in the redevelopment of post-quake Ōtautahi. Among her other accolades, Dame Aroha was once named ‘Young Māori Woman of the Year’, was awarded the Queen Elizabeth II Silver Jubilee Medal in 1977, and in 1993 was named a Commander of the Order of the British Empire.

And yet, all these achievements do not adequately capture this kuia and her lifetime of service.

Entering the world in 1938, Aroha Hōhipera was born to Metapere Ngawini Crofts (née Barrett) and Edward Teoreohua Crofts. She and her whānau lived a simple, full life at the pā in Tuahiwi, a life of service at the flax roots and influencing at the highest levels.

From the age of seven, Dame Aroha was passionate about kapa haka: she was co-tutor of the Māori cultural performance group at the 1974 British Commonwealth Games in Christchurch; and was head tutor of a similar group at the 1975 New Zealand Games, also held in Christchurch. She set a world endurance record for a poi performance at 30 hours 19 minutes!
She became a teacher, in her mid-40’s teaching until 1989, a time of much change for her when she experienced health challenges and her husband, Peter Reriti, passed away. She took up new mahi and put down some old mahi, stepping more deeply into her life’s work – triggered by her role as kaiārahi for the Te Māori exhibition. She left teaching, and with 22 years as a member of the MWWL Ōtautahi branch driving her forward, Dame Aroha was elected president, where with fierce passion she campaigned for Māori health and wellbeing, empowering and inspiring others to take action.

Her leadership roles were many and varied, she was Chairperson of Poutama Training Centre Trust and a Board member of the Ngai Tahu Development Corporation. She was Chairperson of Nga Maia Māori Midwives Trust and a member of the Management Committees for both Rakaia Māori Land Inc. and Mawhera Māori Land Inc. She was Supervisor of the Whānau Toko i te Ora Parenting Programme. She was a member of Te Ropu Whakaruruhau Breast Feeding Authority and Te Ropu Kawa Whakaruruhau at ARA.

More than a leader of organisations, she was a leader of people – guiding and inspiring everyone who met her, and always putting her whānau first.

“I remember someone once asked me ‘what or who would you come back as, if you could?’ And I said ‘a woman’. Because women can do anything. We can love, we can hurt, we can fight. We are mothers. We are beautiful creations. So just be who you are. Don’t ever give up an opportunity. Never turn down an offer – if it is pono. There’s so much living to do, and I’m going to live it to the fullest until the day I die.” Dame Aroha Hohipera Reriti-Crofts.

Tangihanga o Dame Aroha Reriti-Crofts DNZM CBE JP was filmed for those who were unable to attend the service.