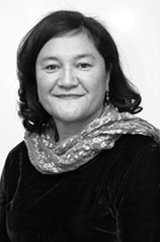 The other day my five-year-old nephew pointed out to me that I have “crazy hair”. Was I just trying to embrace the freedom of my naturally frizzy locks, or was it the result of three months into the leadership role having experienced a 360-degree view of everything that matters to Ngāi Tahu whānui? For a brief moment, I was jealous of all those separate government departments with their resources, before I headed back to my reality and expectations that are on the shoulders of our team.

This whirlwind tour of iwi, kāinga, whānau and individual-led tribal activities showed me that we are far from being a passive bunch. It emphasised that we are a vibrant, passionate and determined lot who want the best for our whānau in every which way you could imagine – phew! It’s an aspirational way of being and I see my role as enabling opportunities to bring this to tangible fruition. I am also a realist and note that if I want to better myself at something then I need to focus rather than skim the surface. It is an approach I bring to my new role.

Speaking of learning, someone said to me the other day that I was the first person in the tribe they had spoken to who did not know much about mahinga kai. Given I was at the Ngāi Tahu Seafood board meeting, I was embarrassed for a minute, but later I recalled childhood days. Dad bringing home his beloved kina, and promptly being told to prepare it out in the garage. Mum and her magnificent ways of presenting crayfish. The muttonbird tins that would arrive at a certain time of the year. Whitebaiting adventures starting at absurdly early hours. The neighbours always had eels hanging in their garage before they popped them into their homemade smokehouse. So as a child maybe I knew how to benefit from mahinga kai, but my appreciation of the cultural and social values that lay beneath was somewhat lacking.

Recent opportunities to meet with spirited and enthusiastic water-baby whānau of all generations across Ngāi Tahu has catapulted me into their world of mahinga kai, and more specifically the worry of polluted waterways, eroding ecological habitats and land use intensification. I now have my eyes wide open when I travel up and down Te Waipounamu watching the kilometres of irrigation and wondering about all that water. I am a believer in finding a balance to drive the economy, but not at the expense of the environment.

After all, we are supposed to be ki uta, ki tai (from the mountains to the sea) guardians and if we cannot sustain and regenerate healthy waterways, what is the point of having a healthy economy in an unhealthy surrounding? For me, the blinkers are off. I now take notice of what is happening, and will continue to be