In the language of scriptwriters, the term “story arc” refers to a central theme that unfolds within each episode or scene. For Ngāi Tahu sound mixer and recordist Hammond Peek, the story arc of his life and career can be summed up in a word: whānau.
The two-time Oscar winner talks to kaituhi Ila Couch about a career that has taken him all the way to Hollywood, but has always led back home. 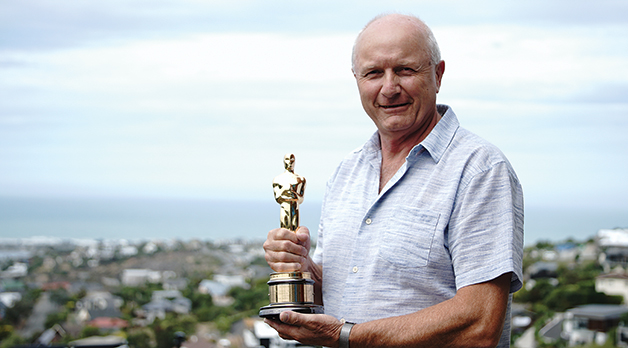 “If they’re stolen the Academy won’t replace them.”

What is easy to spot are the DVDs. Stacks of them in front of the television: Fences, Lion, Moana, Moonlight, La La Land. Over the course of two months, 30 to 40 films have been arriving by international courier at his Christchurch home. These are no ordinary DVDs. In the Motion Picture Industry they’re called “screeners”, sent out to Academy members to view and vote on.

The two-time Oscar winner has been voting since 2011, and his library would be huge if not for a few rules. “I’m not allowed to lend them to anyone else. In fact, I’m meant to chop them up once I’ve viewed each DVD.” As time consuming as it is, voting is a way to give back to an industry he has been a part of for 40 years. “Even though I’ve been recording sound all these years, ultimately my main reason for doing it is that I enjoy telling stories.”

The whakapapa of every family holds an interesting story or two, and for Hammond it is his maternal grandfather Thomas Norton (Ngāi Tahu, Te Āti Awa, Ngāti Kurī) who stands out as a fascinating character. “When you’re a kid you get told certain things you don’t question or follow up on, but I knew Granddad had been a whaler. At 14, he was the youngest gunner on the front of the whale chasers.”

Hammond grew up in Picton, not far from Arapawa Island, where his grandfather worked at Te Awaiti whaling station. The fourth of six kids, Hammond spent most of his childhood outside. “We didn’t get television until I was nine or ten years old, so we entertained ourselves.” 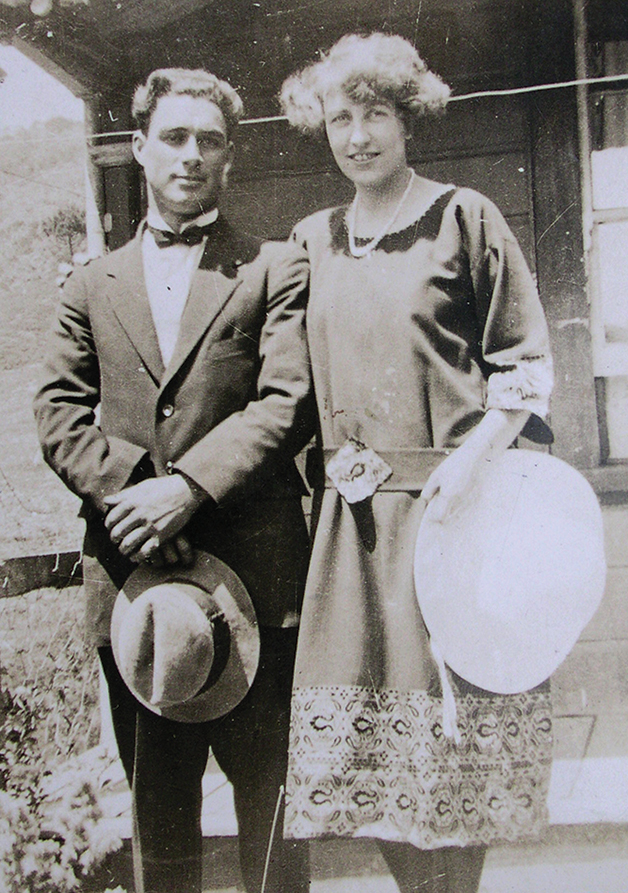 Above: Thomas and Bertha Norton (Grandad and Grandma).

At 16 he got a glimpse into what would be his future career when a crew arrived in Picton to shoot a kids’ series. “There were lights, cameras, reflectors, and actors; and I thought, ‘Wow – Hollywood. It would be great to do that.’”

At the University of Canterbury in Christchurch, Hammond studied mathematics, a subject he was good at but lost interest in. Having failed to pass enough subjects, he left university, made and sold jewellery, and enrolled in a graphic design course, where he met his future wife, Renata. The year he was married, Hammond accepted a job he was completely unqualified for. He agreed to fill in for a soundman who had fallen ill.

“We spent three days shooting mock interviews with the cameraman’s wife. That was my formal training.” From there he hopped on a plane to Auckland to record sound for a documentary. “I sort of adopted that stance, ‘Fake it ’til you make it,’” says Hammond.

“The rest I learned on the job.” And so it was that at the age of 24 and quite by accident, Hammond had stumbled into the magical world of production.

By the end of the 1970s the Peek family were living in Auckland, where a stronger market meant greater opportunities in commercials, documentaries, television dramas, and feature films. In those early years Hammond recorded location sound for Bridge to Nowhere and The Quiet Earth starring Bruno Lawrence; and Came a Hot Friday, featuring the country’s most beloved comedian, Billy T James. “One of the hardest things recording that film was shutting the crew up,” says Hammond. “They would be cracking up because he was just so funny.”

With Hammond frequently away on location, wife Renata was often left to single-handedly raise their five children – Eva, Ferand, Marcel, Lucita, and Michael. Hammond remembers how tough it was, hearing his son back home had broken his leg. “You’d hang up the phone and it felt really hard because you weren’t there. You couldn’t be the person who looked after the other kids, or take your son to hospital.”

In 1990 Renata’s own health took a turn for the worse when she suffered kidney failure. “When your kidneys pack up you’ve got to sit attached to a machine for 5–8 hours, three times a week. I seriously considered the possibility of ending my work in the freelance film and television industry so I could be home to sit with Renata and look after the kids.”

Faced with a potentially long wait for a kidney transplant, the couple shifted their family to Christchurch so Renata could tap into the support of her whānau there. “We had some really tough years. It was hard on our kids seeing their mum sick for a huge part of their childhood.”

To bring some stability to the family finances, Hammond took a break from freelancing and accepted the position of Head Tutor at the New Zealand Film and Television School in Christchurch. “It was the hardest year’s work I have ever done. There was all this stuff about waveforms and decibels. I had managed to get this far in the industry without really understanding the technical aspects of what makes sound, sound.” 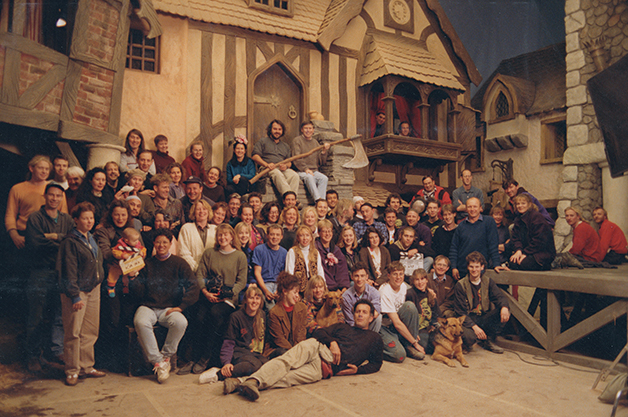 Above: Cast and crew on the set of Heavenly Creatures.

When he did return to production work, Hammond made sure to take jobs that allowed him to stay close to his family. In 1994 he was offered a feature film being shot in Christchurch. “I remember at the time thinking, ‘This is Peter Jackson – all the films he’s made to date have been splatter movies. Lots of blood and guts. Do I really want to get involved in a story where two girls murder one of their mums?’”

Before making a decision Hammond asked for a copy of the script. “I’m a pretty slow reader, but I was captivated.” Saying yes to the film Heavenly Creatures turned out to be one of the best decisions of his career, cementing his working relationship with Peter Jackson.

By the time The Lord Of The Rings films came along, the tough times that had brought the family back to Christchurch were behind them. After a seven-year wait, Renata had finally received a kidney transplant. “Her skin colour changed, suddenly she had lots more energy. It was like the Renata of old had come back to me. I was able to head off knowing my family was okay back in Christchurch.”

Hammond worked alongside a mix of local and international cast and crew during the 14 months it took to film The Lord Of The Rings trilogy. He describes the “family feel” on set as something special to the New Zealand film industry. “It becomes like a whānau for a particular period of time, and it’s very close. One of the runners on LOTR was a great surfer, so he took all the Hobbits out and taught them how to surf. That probably wouldn’t have happened in any other country.”

When Hammond won an Oscar in 2004 for Best Sound Mixing for The Lord Of The Rings: The Return of the King, he acknowledged the crew first in his acceptance speech. “A lot of people had their Oscar parties, and all the crew were glued to the TV. I felt incredibly proud being there.” Two years later he was back to accept his second Oscar for Best Sound Mixing on Peter Jackson’s version of King Kong.

Despite the additional accolades of a Cinema Audio Society Award for best sound in 2001 and a British Academy of Film Television Arts (BAFTA) nomination, he remains down to earth. “The unexpected thing was a lot of people didn’t call me up for documentaries and TV commercials. They weren’t sure now I’d won an Oscar that I would want to do them anymore.”

“I’ve filmed on quite a few marae, and in 1997 I was at Takahanga Marae for the signing of the settlement. I don’t think it really hit me until later on. It was such a critical part of Ngāi Tahu history and my own as I start to develop my connections to Takahanga Marae and the rūnanga of Kaikōura.”
Hammond Peek 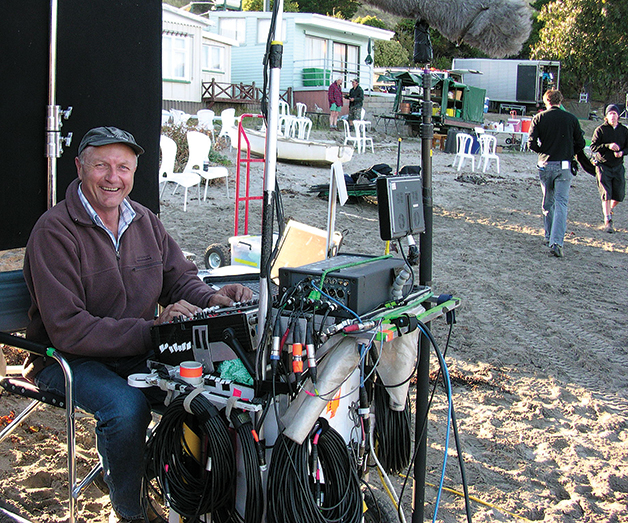 Above: On the set of Kaitangata Twitch.

Hammond’s last Peter Jackson project was the 2009 feature film, The Lovely Bones. In 2010 he worked on the TV series Kaitangata Twitch, filmed in Governors Bay. These days he says he hasn’t retired – he’s just stepped away from the industry. “I got tired of being away from home, and then I got to a certain point where I would rather do other things.” Alongside managing investment properties, he offers his services as tour guide with a Christchurch company taking LOTR fans to the Edoras location at Mt Sunday.

There has also been time for Hammond to dig further into his Māoritanga, which has intersected with his career many times over the years. “I’ve filmed on quite a few marae, and in 1997 I was at Takahanga Marae for the signing of the settlement. I don’t think it really hit me until later on. It was such a critical part of Ngāi Tahu history and my own as I start to develop my connections to Takahanga Marae and the rūnanga of Kaikōura.”

Having taken an introductory course in te reo Māori, Hammond is enthusiastic about the experience. “If you’re thinking about doing a te reo course, go for it. No matter what age you are. I always tell my wife, ‘I’m going to live to a hundred’, and they say the best thing to do to keep the old brain active is to learn a language.”

The arc of Hammond’s story comes full circle with his children Ferand and Lucita, who now work in the film industry. “My son often contracts to the digital department of Park Road Post in Wellington. He wants to direct his own feature film. Our youngest daughter works at Weta Digital on many of the latest blockbuster movies.” Just this year the family celebrated the 20th anniversary of Renata’s successful kidney transplant and 41 years of marriage.

“I thank God for the blessing of my soulmate and my five great kids, all who I am extremely proud of.”

As to whether he would like the chance to stash a few more Oscars around the house, Hammond has this to say. “If Peter Jackson called me up and offered me a job I’d have a nice chat and say no. I don’t miss it.

“For me, life keeps getting better.”