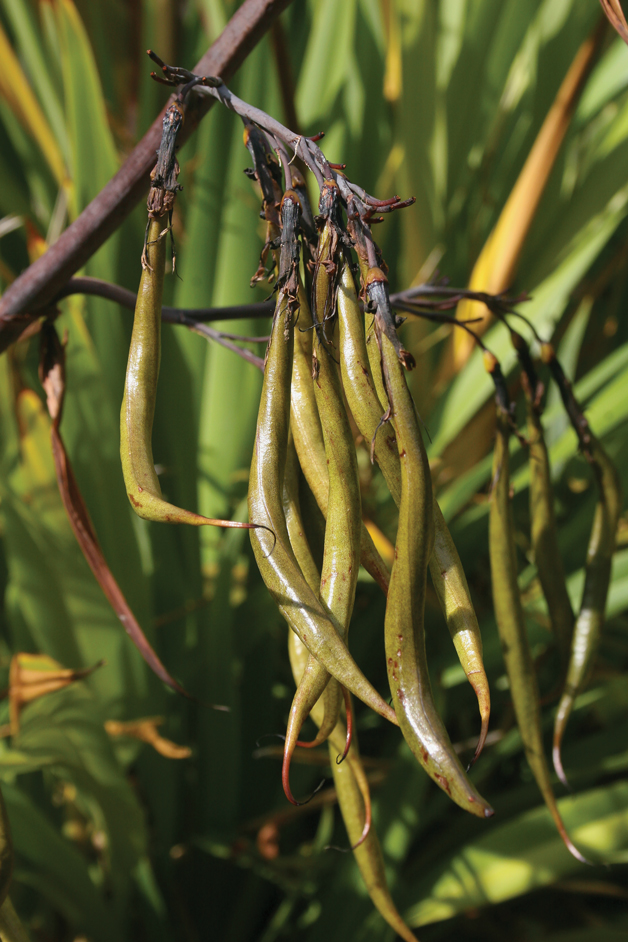 Although wharariki (Phormium cookianum) is commonly known as mountain flax, the name is misleading, because this hardy evergreen is just as likely to be found growing on exposed coastal sites as it is in high-altitude areas. Wharariki is one of this country’s most common plants, but it is easily mistaken for its close cousin harakeke (Phormium tenax).

Both species flourish in a wide range of situations, but wharariki is less tolerant of wet conditions than harakeke, and more tolerant of cooler temperatures. It is very hardy on exposed windy sites, and often grows on steep cliff faces, rocky outcrops, and mountain slopes.

Generally wharariki is smaller than harakeke – usually less than 1.6 metres and rarely more than two metres, according to most sources. Its leaves are usually light green, and they are shorter, droopier, and softer than harakeke.

Wharariki flowers are a light greenish-yellow in colour with some natural variation into tones of orange, red, or yellow. It flowers from November to January, and seeds ripen between February and March.

The most obvious distinguishing feature between the two plants is the seed pods.

Wharariki seed pods are long and narrow, often with a twist, and hang from the stalk, becoming curly and papery as they dry out. By contrast, harakeke seed pods stand upright on their stalks and are a deep red colour.

Historical records suggest wharariki was valued by Māori for the softness and suppleness of its fibre. Its fibre bundles are weaker and finer than harakeke, and it was more difficult to extract them. Therefore, it was more often used for plaiting than weaving.

Although wharariki was used to make kete (bags) or whāriki (mats), they were not as strong as those made from harakeke, and the fibre was not used to produce muka.

Traditionally the plant was used to make fishing nets, fine, silky sleeping mats, shoulder straps or waist belts, rain capes, and sandals. However, pāraerae (sandals) made from wharariki would only last half a day, whereas those made from harakeke or tī kōuka, if well made, would last three or four days on hard ground.

In his Field Guide to the Native Edible Plants of New Zealand, Andrew Crowe says the nectars of both species of flax were used either alone or to sweeten other dishes. On its own, flax nectar (wai kōrari) was a refreshing beverage, one of the few liquids other than water drunk by Māori. In the South Island, wai kōrari was mixed with the root of tī kōuka, or added to fernroot meal as a sweetener.

Considering the extensive medicinal uses of harakeke, there are surprisingly few references to wharariki being used in traditional rongoā in Murdoch Riley’s Māori Healing and Herbal.

It was used as a poultice to treat boils or “scrofulous swellings” caused by a type of tuberculosis. The mucus from the base of the mountain flax was regarded as the most valuable in the treatment of burns. Likewise, mountain flax produced the best purgative, Riley notes.