Aoraki Bound is a cultural leadership programme developed collaboratively by Te Rūnanga o Ngāi Tahu and Outward Bound. 2016 marks the 10-year anniversary of this initiative, and provides a timely opportunity to reflect on its beginnings, its successes and its future. 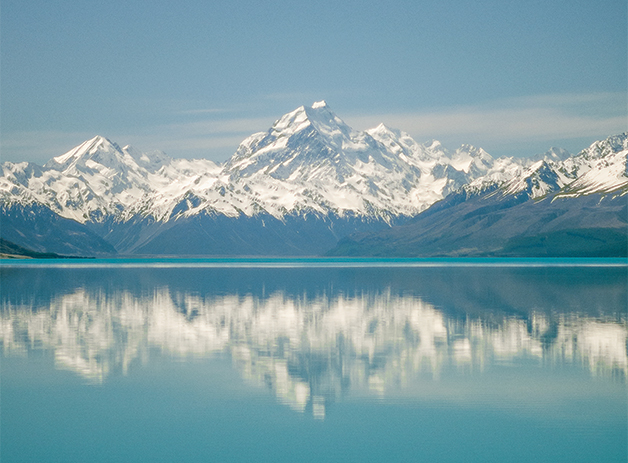 The Aoraki Bound story begins with co-founders Craig Pauling and Iaean Cranwell, and their personal journeys of discovery having grown up with no connection to their iwi. As young adults working with the iwi they got thinking about developing a cultural education programme to help reconnect Ngāi Tahu with their heritage and their landscape. As Craig says, “having those sorts of experiences is really important if you’re a person just starting your journey in terms of your whakapapa. I was exposed to this by working for Te Rūnanga, but not everyone has that opportunity.”

The idea of using the Outward Bound framework as a means to deliver cultural content came about when Craig attended an Outward Bound course in June 2003. He found the experience so rewarding that he wrote to Iaean mid-course telling him to book in to the next intake. Sure enough, by the time he returned home, Iaean was preparing to leave.

Iaean says, “When I came back from Outward Bound, Craig and I had a bit of a brainstorm and decided Outward Bound was awesome, but it didn’t have that kaupapa Māori element, tikanga Māori, whakataukī, kīwaha, the stories of the place that give a sense of belonging.”

This idea might never have gone any further if it wasn’t for another Te Rūnanga o Ngāi Tahu employee Patsy Bass, who happened to be on the Outward Bound Council. When she heard Craig and Iaean’s comments, she suggested they approach Outward Bound about developing a course for Ngāi Tahu, which could include that Māori content.

When thinking about what a Kāi Tahu-oriented course might look like, Craig and Iaean knew immediately that it should involve Aoraki, our tūpuna mauka and symbol of tribal mana. They remembered the late Kelly Davis, of Waihao, speaking about the importance of actually visiting and engaging with our landscapes. It was Uncle Kelly who first challenged Craig, Iaean, and other young Te Rūnanga staff about this, and subsequently took them to Aoraki. This is why the pair’s first thought was that if they were going to do something with Outward Bound, it had to incorporate the advice of Uncle Kelly to get participants to Aoraki. And so the concept of Aoraki Bound was born.

Once this kaupapa was established the support of tribal leaders was sought to get the idea off the ground and take it to the people. “We needed the buy-in from our chiefs at the time, our rangatira Tā Tipene O’Regan, Joe Waaka and Maika Mason,” Iaean says. “Without their mana we wouldn’t get very far.”

Fortunately, this support was given. According to Tā Tipene, “most of us intuitively knew that this was a good scheme, a good idea. So we went out and did it.”

In tandem with this, meetings were set up between Ray Watson and Trevor Taylor, the then CEOs of Ngāi Tahu Development Corporation and Outward Bound. Trevor in particular has vivid memories of an early planning hui that took place at Rāpaki, he saw the connection between Ngāi Tahu and Outward Bound while listening to whānau members (including the late Aunty Te Whe Phillips) talk about their aspirations for rakatahi. “I remember turning to our operations manager and saying, ‘I am hearing Outward Bound. Are you hearing Outward Bound too?’ Because the values which they were looking for were exactly the same values we try to instil in our students.” 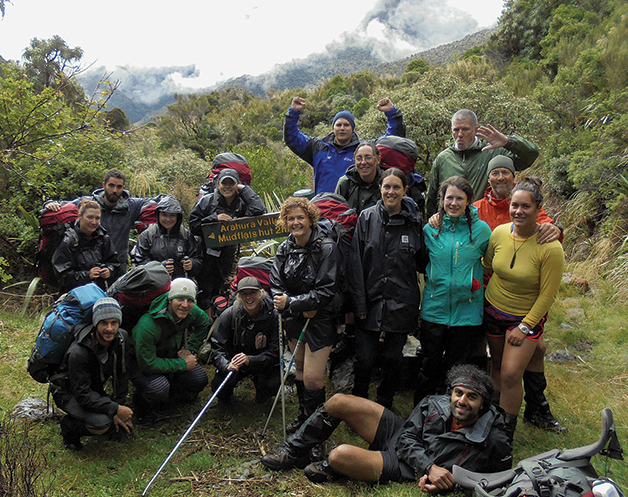 Tired members of March 2016 rōpū trying to muster up smiles for the camera.

With the agreement and support of all parties firmly cemented, Aoraki Bound went into design and development and the rest is history.

Trevor Taylor recalls a special moment at the conclusion of the pilot course: “It was at Lake Pūkaki. I had the privilege to stand by the kaikaranga, Aunty Te Whe, as she called the waka onto shore, and as the kaea on the waka responded. It was drizzling with rain, and at that time the cloud just parted and we could see Aoraki. And that was when I saw the impact of what that meant. It is those sorts of magical moments which make you actually think deeper into who you are.”

While there have been many tweaks over the last 10 years, the basic structure of the course I attended in March this year is similar to the original. We spent eight days at Anakiwa in the Marlborough Sounds, making use of the existing Outward Bound facilities. After this we embarked on a 12-day hīkoi through Te Waipounamu, immersing ourselves in Kāi Tahu tikanga and tales as we travelled in the footsteps of our tīpuna. In particular, we spent time in the takiwā of Ngāti Waewae at Arahura and Kāti Huirapa at Arowhenua, engaging with whānau from these areas and exploring their culturally rich landscapes. And like on the pilot programme, Aoraki came out through the clouds to greet us on the final stage of our journey.

Since the pilot course in March 2006, Aoraki Bound has gone from strength to strength. As Iaean comments wryly, in the beginning “there were some teething problems”. It was difficult to incorporate the cultural content into the existing Outward Bound activities, but they were determined that it could be done. Over the years this has been achieved, due to the high calibre of Kāi Tahu facilitators such as Eruera Tarena, Brett Lee, Tiaki Latham-Coates, Rangimārie Mules, and Sampson Karst.

As Aoraki Bound gained momentum and became an established programme, it began to influence the wider Outward Bound organisation. Today, it is considered a badge of honour amongst instructors to lead an Aoraki Bound course. Classic Outward Bound courses include more te reo and tikanga Māori, and it has even influenced the organisation at the governance level. “We used to have something we called our Strategic Direction,” Trevor says. “Now we call it our Kaupapa.”

“I credit Aoraki Bound with being the catalyst for change in my life and my reconnection to my taha Māori. To walk in the footsteps of my tīpuna was truly empowering and gave me the ability to forge a new path of my own.”
Keefe Robinson-Gore Ōnuku, Wairewa

And what about Ngāi Tahu? Tā Tipene says succinctly, “Insofar as I’ve heard nothing but praise for the overall experience I’d say that it’s really been highly successful as an initiative.”

Te Rūnanga o Ngāi Tahu CEO Arihia Bennett believes the success can be measured in part by the external organisations that have begun to engage with it. BNZ and Genesis Energy sponsor the programme, while Meridian Energy and Environment Canterbury are among the organisations that reserve places for their staff. “They love the opportunity for their staff to immerse themselves in knowledge and the underpinnings of what Ngāi Tahutanga is about,” Arihia says.

Anna Brankin enjoying the hīkoi through Te Tai Poutini/West Coast in March 2016; Keefe Robinson-Gore on his hīkoi in February 2015; Anna and fellow rōpū members descending towards the Arahura River; Arahura River: the home of pounamu.

According to Arihia, alumni who go back to their workplaces and communities with a greater understanding of Kāi Tahu are some of our biggest champions.

Feedback from the 265 Aoraki Bound alumni has been overwhelmingly positive, with many stating that their experience was life changing. Keefe Robinson-Gore (Ōnuku, Wairewa) attended in February 2015. “I credit Aoraki Bound with being the catalyst for change in my life and my reconnection to my taha Māori,” Keefe says. “To walk in the footsteps of my tīpuna was truly empowering and gave me the ability to forge a new path of my own.”

Following Aoraki Bound, Keefe chose to focus on his career, seeking employment at Te Rūnanga o Ngāi Tahu. A little over a year later, he is part of the Whakapapa Unit, spending his days reconnecting Ngāi Tahu whānui with their heritage and researching Kāi Tahu history.

Irai Weepu is another who can’t recommend Aoraki Bound highly enough: “Ka whati te tai, ka pao te tōrea! [As the tide recedes, the oystercatcher strikes!] Aoraki Bound is an opportunity to challenge yourself in many ways.

Irai attended the February intake this year, and says his experience reignited his passion for all things Kāi Tahu. The momentum he gained during Aoraki Bound carried him into the role of Kaitoko Mātauranga for Arowhenua and Waihao, a role that sees him working to empower whānau and support schools in this area to become culturally confident.

Aoraki Bound has also had a profound effect on me. Much like Craig and Iaean, I hadn’t had much contact with the iwi when I was younger. I often felt self-conscious about my lack of cultural knowledge, and was hesitant to put myself out there. Aoraki Bound challenged me to push the boundaries of my comfort zone, and gave me the courage to embrace my heritage.

Recently I stood at the Waitaha Kapa Haka Regionals as part of the Te Rūnanga o Ngāi Tahu team, something I never imagined I would do. I have developed my reo and my knowledge of Kāi Tahu history, and have forged lifelong friendships. Above all, my experience at Aoraki Bound has cemented my commitment to working with the iwi for the betterment of our whānau.

For Iaean, this is exactly what Aoraki Bound is about. “The challenge is that when you finish, you find some way to give back. It might be for your community, for your whānau, your hāpu, your iwi.” 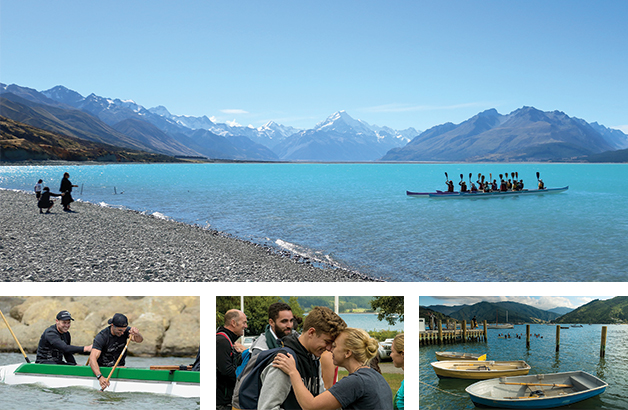 When asked where she sees Aoraki Bound in the future, Arihia says, “the first thing for us to do is stop and celebrate, congratulate those who came up with the idea and those who have been participating in it for all of this time. But it’s also a time for us to look forward.” One popular suggestion is the development of a shorter Aoraki Bound “crash course” for those who can’t commit to the 20-day course.

In addition to this, Tā Tipene believes that alumni need to be involved in follow-up programmes to reinforce their learning. “Knowledge is about this whole business of comprehending, understanding, and seeing relationships between things. Looking at a piece of landscape and thinking of all the human interactions of our ancestors with that landscape. You can look all that up, but knowing it inside of yourself is part of your being.”

One such initiative is the Ball Pass experience, provided for up to four Aoraki Bound alumni each year, and donated by the late Gottlieb Braun-Elwert and his wife Anne from Alpine Recreation Ltd. Aoraki Bound has also led to the development of other leadership programmes including Manawa Hou and the Tumeke programme run by Stephanie Leith in Murihiku. Further programmes and opportunities are in the works, but they take time and energy to make happen.

It’s the ability to put people, history and place together that makes the experience truly unique. “That’s what Aoraki Bound does. It gives people a sense of place and a sense of belonging to the landscape, and to Te Waipounamu,” says Iaean.
“In this day and age, it’s easy to lose sight of the importance of this for our people. Providing opportunities for both our people and others to do this may become ever more critical in
the future.”