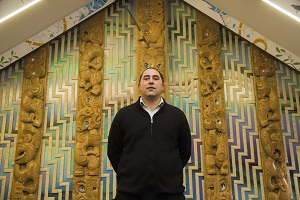 At TE KARAKA, we always ask people for their hapū and iwi affiliations.  Sometimes we get them, sometimes people don’t know or are unsure. Brett Lee is  straight to the point about his links to Rāpaki, although he is now living over the  hill in Christchurch.

“I always say Ngāti Wheke and Ngāi Tahu because I was  born and bred in  Rāpaki. Although I’ve got connections to some of the other  hapū on Banks  Peninsula and Tuahiwi, I’ve always just said I’m from Rāpaki.

“I lived there until after high school. When Mum and Dad used  to be out there, I used to go back all the time. Since the earthquakes they’ve moved out to Rangiora, although in saying that I seem to be out there more than when I was flatting. Because Dad is general manager at the marae, I seem to be there a lot.”

Brett, 28, is the latest from Ngāi Tahu to be invited to attend the country’s top Māori language school, Te Panekiretanga o Te Reo Māori, following in the footsteps of scholars like Hana O’Regan who attended in 2004, and Karuna Thurlow and Kari Tipa, who recently graduated.

Te Panikiretanga o Te Reo Māori was set up in 2004 by Dr Tīmoti Kāretu, Dr Te Wharehuia Milroy and Professor Pou Temara, and designed to take fluent Māori speakers to a higher level. It is dedicated to excellence in scholarship, teaching, and research in the Māori language, and its founders make no apology for its focus on elite students.

Brett is nervous, of course. Who wouldn’t be? “My first thought is that it is a massive honour. Second, I was kind of freaking out. A little bit nervous about going. I’m not the most fluent in te reo and I’m not sure what to expect. From what I’ve been told a lot of the assessment is around whaikōrero and that.”

It is a marvelous opportunity — 12 wānanga over the year, one a month, with up to 25 students invited to take part. “They basically select you, usually based on your commitment to te reo from attending kura reo throughout New Zealand,” says Brett who, for the past three years has worked for Te Rūnanga o Ngāi Tahu as a language advisor, helping implement Kotahi Mano Kāika, Kotahi Mano Wawata (one thousand homes, one thousand aspirations), the tribal strategy for supporting te reo.

He knows how hard the journey to learn te reo can be. “Growing up, I was always around the marae and most Māori spoken was during pōwhiri and tangi. When I went to Cashmere (High School), I did kapa haka. But I didn’t feel like I could hold conversations in te reo, and it got worse in the seventh form when I was the only one at school studying Māori and had to do it through correspondence.”

After taking te reo Māori at Cashmere, Brett went on to complete a degree in Māori studies at the Christchurch Polytechnic Institute of Technology. Getting involved in kapa haka at high school helped him focus on te reo, he says.

“When you start learning all those songs or when you are competing, you need to know what those words are and what the actions mean.”

Brett reckons he still struggles a bit with conversational te reo these days. At polytech, because he was with a tight group of friends, they began to speak te reo among themselves.

“We had a core group of us that stayed three years. We were pretty tight and we started getting our conversational skills up, but I still struggle today to be honest. It’s hard to find people to hold conversations with.

“For me, my whānau doesn’t really speak it; they choose English. My partner is Pākehā, and the majority of my friends speak Pākehā.”

As a language advisor for the tribe’s language strategy, Brett sees the challenges in keeping te reo alive. What is the best hope for survival of te reo? That question is asked a lot, he says. Wānanga are important, especially full immersion, which helps a great deal with conversational skills.

“You’ve got to find a way to make it the norm. Sports teams speaking te reo is good, but the main focus needs to be on young ones and their parents speaking te reo in the home. If you can get parents involved, they will pass on the language.

A language has to be relevant, he says. “You have to find a way to make it part of everyday life.”

Professor Kāretu was involved in setting up Kura Reo — week-long wānanga aimed at those with an intermediate or advanced grasp of te reo Māori, but he also saw the need for training for those who were expected to lead in oratory and tikanga.