Tags: Bush and Beyond, Environment 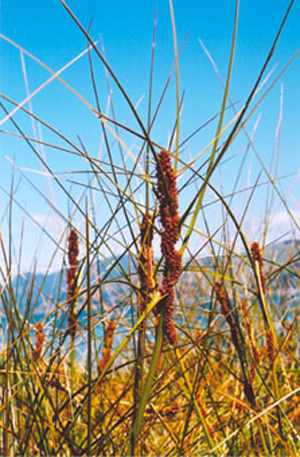 Pīngao (Desmoschoenus spiralis), or golden sand sedge is found only in New Zealand and is one of the best sand dune stabilizing plants in coastal areas. It is also a plant of considerable cultural and spiritual significance to Māori. There are legends associated with it and it is highly prized as a durable weaving material.

As a stabilizing plant, it works by trapping wind-blown sand between its leaves and around the base of the plant and the long rope-like rhizomes it sends out. This helps create low, undulating sand dunes. Once found throughout the country, pīngao is now only found in a few locations, where active replanting programmes have been established.

Pīngao is regarded as a taonga (treasure) by tangata whenua, as it is one of four key native species used by iwi for weaving – and it is the only fibre that doesn’t require colour enhancement; it dries to a brilliant yellow gold. This lends pingao to the weaving of tukutuku panels.

Traditionally, pīngao was harvested in autumn. The head of the plant was removed for its leaves and a side shoot was cut off and transplanted next to the parent plant to ensure an ongoing source of weaving material. From the 1980s, there was a noted decline in the abundance of pīngao, which prompted the Forest Research Institute to investigate sustainable harvesting methods. It was found that clipping the most desirable leaves – as opposed to cutting or wrenching – not only produced a better harvest, it also caused the least damage to the plant.