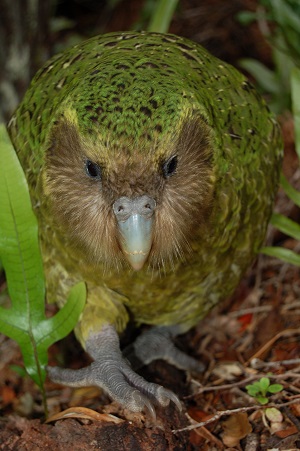 Sirocco, official spokesbird for the Department of Conservation and the Ambassador for Kakapo Recovery.

The kākāpō is one of the rarest parrots in the world and every year countless people from around the world, including dozens of hard-working volunteers, give their time and energy trying to save the kākāpō from the brink of extinction.

Once widespread in New Zealand, by the time Europeans arrived in the early 1880s, kākāpō populations had become confined to the central North Island and forested parts of the South Island. By 1894 the birds were in serious trouble and despite ongoing attempts over many decades to increase the population, just 51 birds were recorded in 1995.

The Kākāpō Recovery programme was established in 1995 to protect existing kākāpō and to increase bird numbers and after the first five years, population recovery was on target with an estimated 62 birds recorded.

The Department of Conservation (DoC), New Zealand Aluminum Smelters (NZAS) and Forest and Bird work collaboratively within the Kākāpō Recovery Programme and Ngāi Tahu has and will continue to be involved in supporting the activities of the programme.

Programme members have acknowledged that it is important to have representation from Ngāi Tahu and its iwi members in the working group. Tāne Davis, (Ngāi Tahu – Ōraka Aparima) is the Ngāi Tahu representative who works closely with other group members on the programme. He has been a part of the initiative since it began and along with other iwi members, is consulted with during decision-making processes around the protection, management and conservation of the kākāpō.

Tāne believes it is important that tangata whenua are approached when scientists and other external groups make decisions regarding the bird because Ngāi Tahu has a relationship with kākāpō that dates back centuries.

Historically, Ngāi Tahu whānau would hunt the kākāpō every year during the summer months. Not only were the birds an important source of food but their feathers and skins were also used to make cloaks or capes, which were worn by certain iwi members.

Tāne has a love for different bird species, especially birds like the kākāpō that are nearing extinction and like his tīpuna he says kākāpō are a prized taonga, which should be cherished.
“They are a very special bird – they are quite mysterious and very spiritual; you feel that wairua come off them straight away.”

“For me, being part of the programme means you are acting in your role as kaitiaki and as tangata whenua. The kākāpō is very significant to the tribe,” he says.

Today, there are fewer than 150 kākāpō and Tāne says around 60 of the birds are located in Murihiku region. 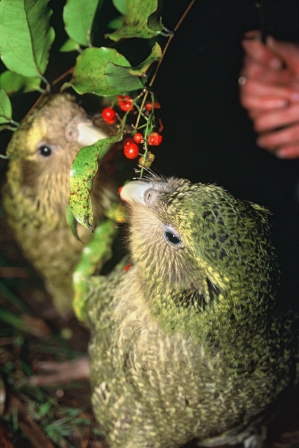 There were significant numbers of kākāpō in the past but unfortunately numbers plummeted with the introduction of pests and predators.

Management of kākāpō today is guided by the Kākāpō Recovery Plans, which runs to 2016. Its chief aims are to increase the bird population, to minimize the loss of genetic diversity, to secure, restore and maintain preferred kākāpō habitats and to increase public awareness and stakeholder support for kākāpō conservation.

Today the birds are protected on three main predator-free islands – Codfish Island (Whenua Hou) off Stewart Island, Anchor Island in Dusky Sound, Fiordland and on Little Barrier Island (Hauturu).
Tāne says the Kākāpō Recovery programme has successfully bred, hatched and raised a number of kākāpō chicks and that science and research have played a big part in increasing the numbers of kākāpō. All known kākāpō wear smart transmitters so they can be rigorously monitored. This provides information about birds’ location and which females have mated, when and with whom.

Tāne says Ngāi Tahu iwi members often volunteer and assist with the programme, and they too are able to accompany the birds on their journeys.
“Many of the Papatipu Rūnanga from Murihiku get opportunities to go with the birds if they are on transfer from one rohe to another and we always try to have our own tangata whenua supporting the transfer of the birds,” he says.

He adds that there are always opportunities for whānau to get involved, especially during the annual kākāpō breeding seasons (April-June).

Tāne hopes that more whānau become involved with the Kākāpō Recovery programme and that together they will continue to strive to increase the number of kākāpō.

“We are trying to keep the numbers up so that we don’t lose this precious taonga,” he says.