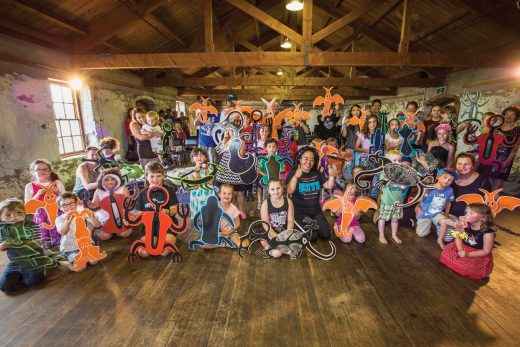 Ancient Māori rock art designs came to life in the most spectacular way as part of Te Ana Ngāi Tahu Rock Art Centre’s Waitangi Day celebrations this year, with the world premiere of TE RERENGA – THE FLIGHT, an interactive puppet show for tamariki.

TE RERENGA – THE FLIGHT is an acoustic rock musical featuring 80 intriguing and detailed “Flatso” puppets inspired by Māori rock art sites in the Aoraki region. It’s a re-telling of the Ngāi Tahu legend of Pourangahua the Birdman and his epic flight to Aotearoa in search of his own kind. The Birdman flies from cave to cave, meeting a host of colourful characters including bats, creepy crawlies, moa, pouākai eagles, Human Bird hunters and their dogs – all intent on making Pourangahua their next meal.

The show is the creation of Jeffrey Addison (Ngāi Tahu) and Whaitaima Te Whare (Ngāti Tūwharetoa), in collaboration with the Ngāi Tahu Māori Rock Art Trust. It supports the Trust’s aim to raise awareness of this tribal taonga as a basis for its protection for generations to come. TE RERENGA — THE FLIGHT is touring nationwide for the next two-years. To learn more about the show, visit www.akee.co.nz