When Ngāti Waewae wāhine issued a challenge at Arahura Marae earlier this year, it sparked a debate over the role of women on a marae.

As Te Amo Tamainu challenged the Crown at Arahura Marae, she felt her ancestors with her and her family, in the shape of her father Jerry, behind her.

“I knew it was a big thing because of tikanga,” she says. “But I knew it was time for a change. I had support from my whole family, and the kaumātua were really supportive. On that day I just wanted to get out there and do it.

“I didn’t just go out there in the moment. I had my family behind me and my tīpuna with me.”

In most tribes, issuing a challenge is a role traditionally performed by men, and the best warrior was always sent out to lay down the taki. Wero literally means “to cast a spear”, and a wero was used to find out whether guests came with peaceful intentions or in anger.

In the Ngāti Waewae rohe however, history shows the person issuing a wero wasn’t always a man. While Te Amo was the first wahine in generations to perform a wero, Ngāti Waewae has a long tradition of women performing the role.

Te Amo says it was a great opportunity to honour Ngāi Tahu ancestors like Tuhaitara and Papakura.

Te Amo and Ngāti Waewae wāhine Brooke Parker, Zoe Wallace, Chantal Tumahai and Maia Campbell were first seen wielding weapons in public on the marae ātea at the opening of Tūhuru last year, but that day, Jerry Pu, father of Te Amo, laid the final taki at the feet of the manuhiri or guests.

This time Te Amo laid a taki at the feet of Minister for Treaty of Waitangi Negotiations Chris Finlayson as he was welcomed onto Arahura Marae, where the Crown made a historic apology to a large contingent from Ngāruahine, from South Taranaki.

Ngāruahine prisoners were sent to Hokitika after the sacking of Parihaka Pā in 1881. As part of the Crown settlement with Ngāruahine last year, an apology was to be made at a place of the tribe’s choosing. That place was Hokitika, where so many of the tribe’s tīpuna spent their last years forced to do hard labour for passively resisting the Crown’s confiscation of their lands.

The idea of Ngāti Waewae women doing the wero came up before the opening of Tūhuru last year, Jerry Pu says.

“The wero is different even in the traditional sense. It was a male thing especially to the North Island and has remained like that through tradition. The flip side is during the times of war. We saw it as an opportunity to allow our wāhine to come out with us because of what our ancestors did.

“All of Ngāi Tahu whakapapa to Tūhaitara who was a famous chieftainess, through to our tipuna Papakura, who led war parties alongside her husband Tūhuru.

“I knew it was a big thing because of tikanga. But I knew it was time for a change. I had support from my whole family, and the kaumātua were really supportive. On that day I just wanted to get out there and do it.”
Te Amo Tamainu 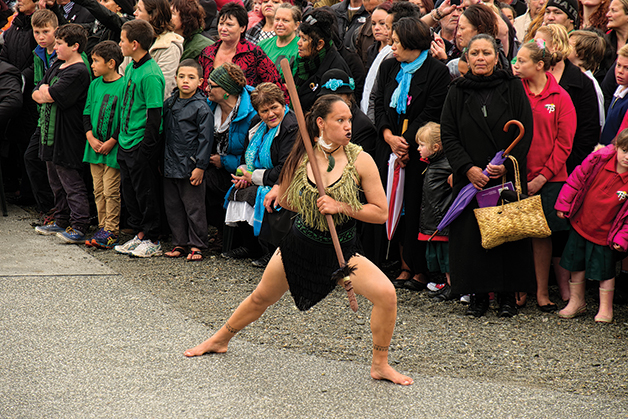 Te Amo at the opening of Tūhuru last year.

“He had a sister Moroiti and she was a tohunga, who gave him the signs whether it was good to go or not. So our women were prominent in those days. The way we see it, if it was good enough for our women to actually fight, it was good enough for them to stand by us. The wero today is ceremonial. I’ve seen all the comments up north and I don’t see where they are coming from. There is a lot of talk out there about men feeling threatened.

“One good comment that came from one of our whanaunga on Facebook is that we have been colonised too much. And we’ve actually forgotten about those women who went out and fought. They only had two choices really – flight or fight

“We’ve forgotten a lot of those old traditions. Women weren’t meant just to be in the kitchen. For us it was a great opportunity to honour our ancestors, especially our wāhine.”

Te Rūnanga o Ngāti Waewae chair Francois Tumahai says the decision was made collectively by the rūnanga. He approached kaumātua, they thought about it, and permission to go ahead was given.

“There was a lot of discussion when Jerry brought this to the executive. We did have some concerns until he talked to our kaumātua.

“Everyone is really comfortable with our wāhine doing the wero. We have been challenged often and we think it is extremely positive.”

The challenge restarted the inevitable debate over the place of women and the importance of tradition. This was especially so on social media, where an argument raged over tikanga. Should Ngāti Waewae be allowed to do what they thought right on their marae? Where does tradition end and evolution begin?

Te Amo wasn’t fussed. “Most has been positive feedback. I don’t really care about the negative feedback to be honest. That is their problem, not mine.”

A reporter from Te Ika a Māui (the North Island) was criticised for daring to question the role of women in issuing a wero. It was politely suggested that he get himself back down to Arahura, where he could explain why he didn’t ask that question at the time.

Māori Television carried a short interview with Te Amo and referred to the “historic” wero. Online the story spread around the world, usually with support for the Ngāti Waewae wāhine.

Up north, some were not impressed. Hundreds of years ago, the wero was functional, the first point of contact between tribes. Some critics claims it is now more about ritual and preference.

A taiaha is a weapon of war. Once, everyone would have known how to use one, with varying degrees of skill. Women were adept in the use of taiaha because it was a matter of survival. Too many people now wave a taiaha around in welcome with little or no skill.
Tā Pita Sharples 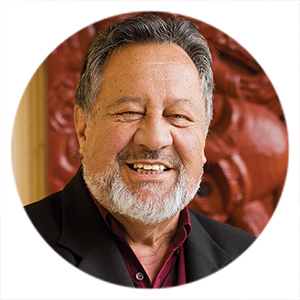 Tā Pita Sharples, a noted mau rākau exponent and co-founder of the Māori Party and former Minister of Māori Affairs, says time and circumstances dictate the form of a welcome and wero.

The Māori Party wasn’t the only organisation started by Tā Pita. He is perhaps better known in some quarters for founding Te Whare Tū Tauā o Aotearoa, the National School for Ancient Māori Weaponry. It has been operating since 1983.

A taiaha is a weapon of war, he says. Once, everyone would have known how to use one, with varying degrees of skill. Women were adept in the use of taiaha because it was a matter of survival. Too many people now wave a taiaha around in welcome with little or no skill.

“We see a lot of abuse of the taiaha and people who don’t know what they are doing.”

He tells a story of how he organised the pōwhiri for Ngāti Kahungunu in 1983 when the tribe hosted Te Matatini. It was the first time 1000 people had performed a welcome in modern times, he says. And he trained seven performers to deliver wero that day.

“The elders approached me to arrange the pōwhiri and the wero, so that is what I did.”

But he remembers a hui beforehand at which four elders stood up one by one and told each other they were wrong in their assertions of tikanga. In reality, he says, all four were correct, but for different times and occasions.

It is all about circumstances. Ngāti Kahungunu women have delivered a wero on occasion, he says.

It is important to be trained in the use of taiaha or māipi as it is more commonly known in Te Waipounamu so it is used correctly during a wero, Tā Pita says.

Te Amo has been training in mau rākau, the traditional art of Māori weaponry, since she was five. As she advanced to deliver a challenge to Finlayson, she recited the whakapapa of the tekoteko on Tūhuru, the whare tipuna at Arahura Marae. Her movements came from Ngā Mau Katoa which is based on 124 whakapapa movements which can be traced back to different waka and have been passed on through the generations, Jerry says.

”I learnt it at my father’s side,” she says. 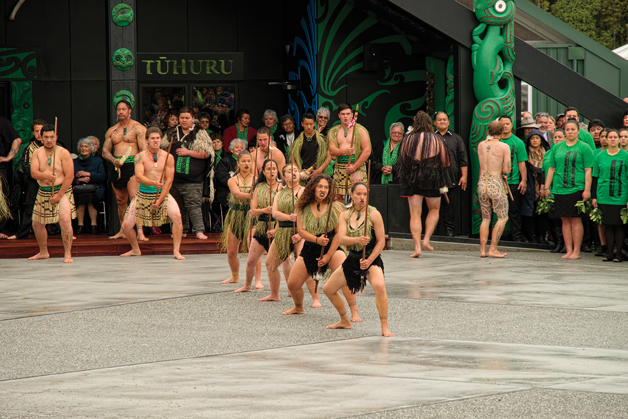 At the opening of Tūhuru last year.

“What people didn’t see was all the hard work that went into training,” Jerry says. “When we did the whakapapa and the stories of the whare (at the opening of Tūhuru), everything laid the platform. Out the front of the mahau is the whakapapa of pounamu and the names of the stones are all female, so the kawa was there, the tikanga we practised. We have a pathway called Te Ara o Poutini me Waitaiki, and that relates back to the story of Poutini, and that’s where women are allowed to lay the taki.

Ngāti Waewae is comfortable with the kawa on their marae. Others are not so sure. There is no easy answer to the question of how a culture evolves and when it is ok to challenge tradition. 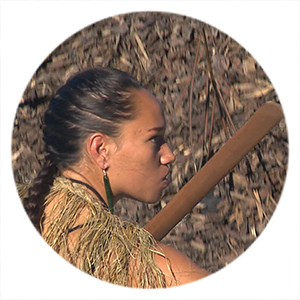 Te Amo speaks of acceptance from her generation and from women, and tells the story of a young girl in a Christchurch mall who came up to her.

“I was in the mall and a little girl came over and asked me for an autograph. Her name was Aroha. Her mum came over and said how Aroha loved the footage of the wero and couldn’t stop watching. It was inspiring for her.”

In another generation we may know whether Te Amo has indeed changed attitudes. For now, she is comfortable in her role, and wāhine will continue to challenge manuhiri at Arahura Marae.